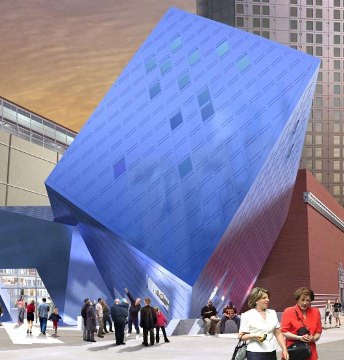 In 1998, internationally renowned architect Daniel Libeskind was selected to design the Contemporary Jewish Museum (CJM) in San Francisco. On June 8, the CJM will at last open its doors to the public. To celebrate the opening, the Museum and Reboot, a nonprofit organization based in New York City, will host DAWN ’08, an all-night arts and culture festival and celebration of Shavuot. Attendees will have the opportunity to “groove, learn, explore and mingle” at the new building and exhibition space before the doors open to the public the following morning. Tickets for the event go on sale today.

In the Beginning: Artists Respond to Genesis, will be the first in a series of CJM exhibitions that examines the contemporary relevance of Jewish texts from a variety of artistic, cultural, and literary perspectives. The exhibition will begin with historical representations of the creation story and culminate with seven major commissions by living artists including Trenton Doyle Hancock (Season 2) and Matthew Ritchie (Season 3).

CJM is located at 736 Mission Street. To learn more about this 63,000-square-foot building, visit the Museum’s website or listen to their cell phone audio tour.