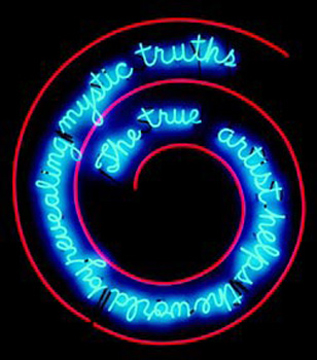 At the risk of sounding like the opening voiceover in Sex and the City, all this talk of the Vatican’s pavilion at this year’s Venice Biennale has got me thinking: can men and women ever really be friends? No, sorry, I mean: can contemporary art express spirituality?

Conventional art-historical ideas about the onset of modernism in the late nineteenth century claim that it rejected the bigger-is-better attitude of hoary old history painting in favor of messy little pictures of beaches and boulevards. Abstract Expressionist painting claimed back some of the spiritual ground lost in the pipesmoke of Old Europe, but its spirituality looks both muscular and empty now, talking loud and saying nothing. Spirituality became even more of a dirty word in the halcyon days of post-modernism. But apparently that’s over now, according to French curator Nicholas Bourriaud, the brains behind Tate Britain’s Triennial this year.

Bourriaud, who looks like somebody dressed up as a French curator for a costume party (how’s that for suspension of disbelief?), chaired a roundtable discussion I recently attended at Tate Britain to launch his vision of art now, which he gives the label “Altermodern” (maybe “alt.modern” is better).  (I did bring a pen and notebook with me, but must have zoned out mid-discussion, because when I looked down when the lights went up it was all skulls and bleeding daggers. Weird.) “Altermodern,” the subtitle of the Triennial, comes from the man who brought you the wildly popular “Relational Aesthetics” and is just as impossible to explain to your mum. Having spent a good 45 minutes with the Tate press release and an intravenous espresso drip, I can just about work out what it’s all about. Artists travel more these days; artists use the internet; artists like texting; artists live abroad (read: “in Berlin”). All of this means that the nature of art now—cross-disciplinary, cross-cultural, multifarious and polymorphously perverse—can encompass not only more ways of making and understanding art but may be able to reclaim ground lost during the modernist (and post-modernist) mountain-climb.

It’s easy to be glib about the Vatican’s attempts to gatecrash the party (there’s no reason why they shouldn’t be there, or that their pavilion will necessarily be worse than anyone else’s) but it brings up some uncomfortable questions about what was lost as avant-garde territory was gained. What Renaissance art at its best provides is common ground between visual pleasure and spiritual sincerity—or at least, philosophical seriousness. The permissive beauty of works by someone like Raphael seemed embarrassingly seductive to the puritanical early modern mindset (Dave Hickey’s essay on Cezanne and Fragonard in Air Guitar makes this point approx. 76 million times better than I could).  I’m not advocating a return to the style of that time—we did that already with the Pre-Raphaelites, for which I am truly, truly sorry—but a reconsideration of the relationship between the visually ravishing and the intellectually or spiritually inquisitive (and that’s what the greatest Renaissance paintings are, like this one) is something worth reclaiming, isn’t it?