Who is Mary Heilmann and what does she have to say about fantasy?

Mary Heilmann was born in 1940 in San Francisco, California; she lives and works in New York. For every piece of Heilmann’s work—abstract paintings, ceramics, and furniture—there is a backstory. Imbued with recollections, stories spun from her imagination, and references to music, aesthetic influences, and dreams, her paintings are like meditations or icons. Her expert and sometimes surprising treatment of paint (alternately diaphanous and goopy) complements a keen sense of color that glories in the hues and light that emanate from her laptop, and finds inspiration in the saturated colors of TV cartoons such as The Simpsons. Her compositions are often hybrid spatial environments that juxtapose two- and three-dimensional renderings in a single frame, join several canvases into new works, or create diptychs of paintings and photographs in the form of prints, slideshows, and videos. Heilmann sometimes installs her paintings alongside chairs and benches that she builds by hand, an open invitation for viewers to socialize and contemplate her work communally.

On the subject of fantasy in art, Heilmann talks about how wonder, life experiences, and previous works anchor her abstractions (in the forthcoming Season 5 book):

A body of work starts by daydreaming, imagining, looking at my own work, the work that’s already around in the studio, and also looking at the work on the computer. All the images that I’ve done are on the computer now. And the work is always made by morphing previous work.

When minimalism ended and post-modernism started for me, I started giving the pieces fanciful titles that related to some kind of narrative that was going on with me. So the titles are often like a three-word poem that is a part of the piece. It’s really opened up my work to where I can make an abstract-expressionist, gestural painting next to a geometrical painting next to an image of a piano, and it kind of makes sense for me. I keep a diary and I just make notes about whatever happened the day before. I write in it in the morning. I have had it now for about twenty years, so I can look back and see what was going on—and I like to read it and remember how I felt way back. Actually, remembering and then expressing emotion in the art is something that I like to do.

What happens in Heilmann’s segment in Fantasy this October?

“Every piece of abstract art that I make has a back story,” says Mary Heilmann, who relays youthful fantasies of wanting to be a Catholic martyr, her childhood dream to become an artist, as well as the antagonism she experienced in school when transitioning from pottery to painting.

Shown completing a new body of work, which includes the shaped canvas Two Lane Blacktop (2008), the segment begins in the artist’s secluded Bridgehampton studio on Long Island. “There are two realities going on in the same painting,” she explains, referencing the collision of deep and shallow space in a single work, the painting as both physical object and pictorial depiction, and the final abstraction and its often fanciful, poetic title. “My spiritual life is very important to me and I think the artworks are icons,” says Heilmann, who believes in the ecumenical power of art to “transport a person in a soulful, rich way, without having any fear of punishment or Hell or sin.”

The segment also features scenes from Heilmann’s video slideshow Her Life and her touring retrospective To Be Someone (2008) at the Wexner Center for the Arts in Columbus, Ohio, where she’s designed colorful chairs on wheels that viewers can use to relax, meditate, or socialize with one another and have “a conversation through the work.” 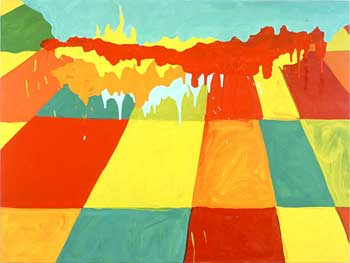 What else has Heilmann done?

Mary Heilmann earned a BA from the University of California, Santa Barbara (1962), and an MA from the University of California, Berkeley (1967). Heilmann has received the Anonymous Was a Woman Foundation Award (2006) and grants from the National Endowment for the Arts and the Guggenheim Foundation. She has had major exhibitions at the Parrish Art Museum, Southampton, New York (2009); New Museum of Contemporary Art, New York (2008); Wexner Center for the Arts, Columbus, Ohio (2008); and Orange County Museum of Art, Newport Beach, California  (2007), among others. Her work has appeared in Whitney Biennials (1972, 1989, 2008) and is in many collections, including the Museum of Modern Art, New York; Whitney Museum of American Art, New York; and Orange County Museum of Art.

Where can I see more of Heilmann’s work between now and the Art21 premiere this October?

What’s your take on Heilmann’s inclusion in Season 5?