Mapping our way back Many thanks to all of you who commented on my posts last week, particularly “On teaching art to scientists,” which seems to have resonated strongly with Art21 and PBS readers. One of my lesson plans surveys contemporary mapmaking, a subject that fascinates artists, scientists, and wanderers alike.

In One Place After Another: Site-Specific Art and Locational Identity, art historian Miwon Kwon traces how site-specific art practices have, over time, revealed “site” to be an unfixed concept. Rather than a synonym for a particular geographic location, a site can be temporary, nomadic, virtual, and ultimately discursive, existing in and as dialogue. “…the increasing instances of locational unspecificity,” Kwon writes, “are seen to exacerbate the sense of alienation and fragmentation in contemporary life.” With site in flux, the very idea of community itself is elusive.

If we can’t define where we come from, then who are we? A response to contemporary life “as a network of unanchored flows” can be located in the explosion of cartographic practices in contemporary art over the last fifteen years. A partial list includes artists physically altering existing maps in order to point out their fragility as constructions (Nina Katchadourian, Shannon Rankin, Miguel Angel Rios), re-imagining “real” territories or creating new ones, to question cartographic authority (Lordy Rodriguez, Ross Racine, Bill Rankin), plotting experiences and memories both collaborative and individual (Liz Kueneke, Denis Wood, Simon Evans). Accordingly, there have also been scores of map-related art exhibitions, which are themselves attempts to map the maps, and so on into infinite regress (check The Map Room for a comprehensive list of map-related activities).

At the conclusion of One Place After Another, Kwon recounts the plot of Valparaiso, the play by Don DeLillo in which the protagonist Michael Majeski leaves on a business trip to Valparaiso, Indiana, and accidentally winds up in Valparaiso, Chile. As the play unfolds, we understand that Majeski’s mis-adventure parallels his sense of identity – he is both literally and figuratively lost. When he returns home to find himself a newly-minted celebrity, he reconstructs his trip and, by extension, his sense of self, via a series of media interviews. Majeski’s journey, Kwon suggests, allows us to see how arriving at the “wrong” destination can lead us to new self-discoveries. The process of getting “lost” can be disorienting but ultimately liberating and, one hopes, rewarding. 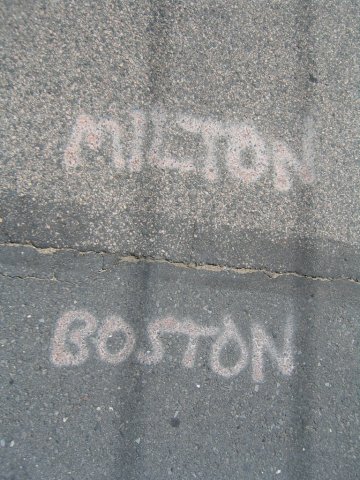 Alex Dunn, outreach coordinator at the Worcester Art Museum, found this scenario to be true when he got lost several years ago riding his bike in Roslindale, a neighborhood of Boston six miles south-southwest of downtown. Asking a stranger for directions “back to Boston,” Dunn was promptly laughed at and told “you are in Boston.” This exchange prompted Dunn to embark on his Boston by Border project, setting out to discover the city by walking the 70+ miles of its political boundary and documenting its visual and cultural demarcations. At times, he found the border marked by clear and welcoming signage; in other points, the only notable distinction was a change in the age of the blacktop and a new set of public works initials on the sewer covers. Dunn’s project, recorded in audio interviews with residents, photographs, and in a journal with hand-drawn maps, grew out of an intense interest in the definition of place and a desire to grasp the makeup of a city beyond its two-dimensional rendering. But it started by getting lost.

We trust street maps, with their authoritative codes and legends and official-looking fonts, to guide us through places both unknown and familiar. They represent, of course, only one layer of reality, one layer of information. What happens when we seek out more information, when we challenge them to tell us more than they present? Alex Dunn followed the “solid” border of Boston only to find that it was, to use the artist kanarinka’s term, “leaky.”  A Boston-based artist who has written extensively on contemporary cartography, kanarinka (Catherine d’Ignazio) argues that a fluid definition of site might render it more inclusive, as opposed to “traditional Western logic,” which “reduces place to a container.” “When thinking about identity,” she wrote in “A Case for Boston as a Liquid not a Solid” (2006), “the complexity of something like a site, place or city requires a kind of artistic interrogation that is radically different from the law or the monument. It necessitates the collaborative construction of a liquid identity: fluid, dispersed, provisional, temporary.”  Borders cannot contain the places they demarcate; rather than losing our sense of self in this unstructured landscape, we might more easily connect with one another.

For her 2007 work, It takes 154,000 breaths to evacuate Boston, kanarinka ran the city’s entire evacuation route system and measured its distance in breaths, in an attempt to “measure our post-9/11 collective fear in the individual breaths that it takes to traverse these new geographies of insecurity.” She mapped each of her 26 runs using GoogleMaps, detailing the statistics of each on her website – number of breaths, mileage, pace, and so on – and recorded them as individual podcasts. When I listened to the audio recently, imagining the fear and anxiety of an urban evacuation, I found my heart rate rising to match her accelerated breathing. No map can prepare us for the emotional and psychological consequences of this journey. kanarinka’s call for “leaky” borders takes on more literal meaning in Francis Alÿs’ 2004 performance, The Green Line, in which the artist walked a 15-mile stretch through Jerusalem carrying a leaking can of green paint. As Holland Cotter explained in the New York Times, “The route he followed was one drawn in green on a map as part of the armistice after the 1948 Arab-Israeli War, indicating land under the control of the new state of Israel. The original Green Line has since been considerably altered on the ground, with cataclysmic consequences for people on both sides.” This line represents a fracture, a splitting of land, people, and culture that over fifty years since it was drawn, remains at the heart of this conflict. Maps might help bring us closer together, but they can also drive us far apart.

Simple actions can be provocative gestures, as the title of Alÿs’ 2007 exhibition of The Green Line project offered: Sometimes Doing Something Poetic Can Become Political, and Sometimes Doing Something Political Can Become Poetic. The seemingly innocent acts of walking or running become complicated when you consider who prescribed the path – whose perspective, what authority, determines our boundaries? Do we fit inside them? Collectively, mapping projects begin to chart the totality of our global condition, leading us toward a more stable sense of place and self on the surface of our spinning planet, in the virtual realm, as a body in motion in a particular time and place. Until it shifts again, perhaps we might map our way back to ourselves.