Paul Zografakis at his studio in Gyzi, Athens, 2010

This is the second half of the discussion I had with Paul Zografakis’ at Gyzi, Athens and the continuation of Friday’s post. He opened his studio to me and I am now showing it to you.

Georgia Kotretsos: At your studio you have old work next to NEW work, NEW territories, NEW experiments without once mentioning Jacques Rancière, Gilles Deleuze, or Guy Debord. The past six months, you ventured into 3D paintings that seem to be gripping onto the wall for dear life by creating the fine tension of an object’s struggle to fight for a spot on the wall.  They are organically placed and conceptually witty. Papier-mâché structures that almost seem painterly from afar are collaged with colored paper. Take me through your journey; break down the evolution of these new works for the Art21 readers, please. Paul Zografakis: You forgot the two hours we talked about [Walter] Benjamin! Really, though, it’s more about Kandinsky’s Concerning the Spiritual in Art if you really want to know!

New — yes it’s great, really freeing to just start building sculptures and make paintings after some time. Having a studio allows me to work larger, messier, and right now, I have the time to start this new body of work. The new work comes out of my collages, where I dissect and rearrange an original towards an alternate composition. The new work, however, has no original reference and becomes stream of consciousness construction, an additive process. I have this idea of the God Particle in my mind since reading about it. It’s amazing — these scientists at the CERN laboratory are smashing particles together at nearly the speed of light in hopes of explaining the origins of the universe. My approach is sort of like that, but instead of sub-atomic particles, I use cardboard and paper. Its very elemental; I try to let the work build itself from the inside out towards a critical mass. Randomness is very much a part of the process, which I try to carry through so that color and form literally reference the work’s creation. Calling the sculptures 3D paintings, well, I’m not sure I’m there yet in calling them paintings. 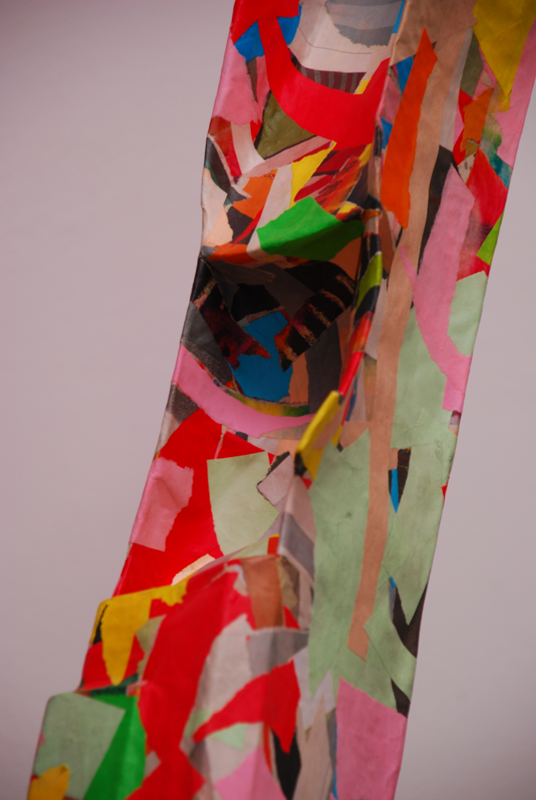 As I get more comfortable with the medium and the process, I’m starting to think about taking more control in their creation regarding form and color, as well as pushing them towards modular installations.

GK: Collage is a big part of your works on paper, as well as cross hatching pen drawings. What are your references?  Do you consider your works on paper finished works?  Last year you had a solo show in San Francisco at the Little Tree Gallery entitled TBD – To Be Determined. How was showing the first body of work that you had produced here in San Francisco? PZ: I reference lifestyle magazines and educational material from the 50s, 60s, and 70s. They have a weird, innocent wrongness that existed in the social culture of these times. Plus, the color of the photos are amazing! These works become part of my thought process as I transition through the mediums I utilize in my practice. Drawing and collage help keep me artistically grounded. My solo show, TBD, in San Francisco existed of primarily collage, a mural, and a three-act performance the night of the opening. The collages were made in Athens and I think are reflective of my lifestyle here. It isn’t much different here than anywhere else I have lived. It’s a matter of learning to adjust to the chaos and embracing a different perspective on functional organization. In that sense, the collages become site specific in their inspiration (beauty and structure out of chaos). The opening was October 2008, during the early throws of the US financial “crisis,” and the work seemed to reference the anxiety people had been feeling at the time. The title TBD spoke to ideas of flux, disillusion, and doubt. I just didn’t think it was going to end up as a premonition. GK: How was your art life in San Francisco before Athens? Had you ever considered to move to New York, or Berlin? When is one a “professional” artist per se?  Does having a studio have anything to do with it?

PZ: San Francisco and Athens are similar in some ways. Both are provincial art scenes, where a handful of artists seemingly get recycled. But San Francisco carries a great history and energy through its active non-profit spaces and DIY shows. My art life in Athens is a bit better, maybe not as far as exposure or opportunities, but rent here is cheaper which has allowed me MUCH more time to make art and to me, that is a distinction of being a Professional Artist — the consistent making of artwork. Most everyone at some point considers moving to a large market. It has crossed my mind,  but for now I am very present in Athens. I see Athens as a place full of artistic opportunities; most would say the contrary. But this lack of opportunity opens up new possibilities — people just can’t sit back and wait to be approached, they have to create their own venues, their own situations to actively keep showing, and this idea, I really think, stems from conceptual thinking about art.

GK: What is next on your plate?

PZ:  I am involved with my current work and enjoy watching it evolve as I learn why I am making what I am making. I believe this work will eventually approach what one would consider installation. Further down the line, I just can’t let go of the feeling I want to do a show about Westerns, but until then, I am just enjoying my time in my studio.