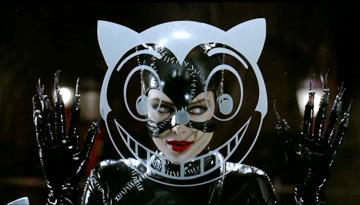 When I was a little kid I was obsessed with comic books. I consumed anything super hero related with a sense of urgency. I imagined that some day I would move to a big city to take up fighting crime. Instead I’ve become a fiber artist, which in many ways is as close as I can get without being bitten by a radioactive spider. Comic books and fiber arts share a history of composing of identity through the use of cloth. Take Mark Newport’s 2009 exhibition at the Cranbrook Art Museum Super Heroes in Action, for example. Acrylic yarn is clearly not the best fabric choice for dodging bullets or, like in Newport’s “Aquaman” (2004), swimming through the depths of the ocean. Yet evoking images such as these (and perhaps some childhood aspirations), Newport suspends acrylic yarn costumes from coat hangers in order to reflect a modern sense of ironic vulnerability.

Newport’s knitted superhero costumes touch on the fragility of modern heroes and the male identity. A middle-aged Midwestern father, Newport takes the “super” out of these heroes and renders them flaccid. He moves beyond the cannon of DC/Marvel heroes and creates heroes from his own lore, like Sweater and Argyle Man. When curator Emily Zilber laments that “both comics and cloth have, over the past century, battled a reputation for amateurism and insufficient gravity…”, I cannot help but reflect on my own childhood aspirations.

Long before I knew about the work of Mark Newport there was one figure central to my understanding of the costume as a tool for identity construction: Catwoman. In Tim Burton’s 1992 film Batman Returns, Catwoman plays the film’s anti-hero. Far from “super”, Burton constructs her as a sort of post-feminist heroine. In the lore of Batman, millionaire Bruce Wayne creates the mantle of Batman to fight crime and avenge the death of his parents. Wayne arms Batman with high tech gadgets using his limitless wealth. But in Batman Returns, Tim Burton’s origin of Catwoman acts as a counter balance to Batman’s wealth and male privilege. A complicated character (sometimes hero, sometimes villain), the persona of Catwoman constantly undermines the patriarchy of the traditional Batman narrative. Catwoman’s costume is crucial to understanding her character’s psyche. In the film (it is currently on Netflix Instant Watch if you haven’t seen it), a lonely secretary named Selina Kyle (Michelle Pfeiffer), is thrown from a window by a her boss Max Shreck (Christopher Walken). The fall should have killed her, but in a Lazarus-like maneuver she is revived by mystical felines. She runs to her lonely one-bedroom apartment, not to call the police, but to redecorate. As she shreds her stuffed animals in the trash compactor, defaces a kitty sweatshirt with black spray paint, and smashes her Hummel figurine collection, she destroys the emblems of femininity that clutter her life. Having destroyed the symbols of a life that failed her, she fashions a full-body black pleather suit with nothing but a sewing machine and some wire. She uses seam rippers for claws. The costume has unfinished seams and makes visible the labor of each stitch. Where Newport takes on a craft traditionally considered “woman’s work” to deconstruct the male ego, in Batman Returns, a post-feminist Catwoman reappropriates “woman’s work” to confront patriarchy.

Catwoman is my fiber/drag mother. Far from a seamstress, she sews out of necessity, not because it is her duty. Basically she’s a broke-ass drag queen. Unlike Newport’s finely crafted costumes, Catwoman’s rough edged ensemble appears held together by her “feminine mystique” and a ball of yarn. Still, Burton’s Catwoman has become a sex symbol often imitated at comic conventions across the world. Newport’s wilted yet flawlessly crafted suits lack the sex appeal of skin-tight pleather, but his work shares Catwoman’s consideration of the constructedness of identity. Both the artist and the fictional character create new power and sensibilities with nothing more than the magic of cloth.