Furries reclining in Marnie Weber’s “Furry Womb” at “A Night of Growth and Discovery.” Image via For Your Art.

Last month, I opened my email to find a “Call For Furrie Interns.” The call came from LA artist Marnie Weber and was forwarded to me by a mutual friend who thought of me “for some reason.” Naturally, I jumped at the opportunity. I soon found myself at furrie rehearsal, amongst a group of bright-eyed and soon-to-be bushy-tailed volunteers. We each chose from a selection of 12 mascot-style animal costumes, and while I was tempted by the elephant and cow costumes, I immediately felt at home — perhaps too at home? — in head-to-toe parrot regalia.

Weber conceived the furrie performance/installation as part of A Night of Growth and Discovery — an extravaganza benefit for the Pasadena-based nonprofit, West of Rome Public Art. The happening was to take place amidst the collaborative installation by Mike Kelley (Season 3) and Michael Smith, which has been on display all summer in Kelley’s mammoth 15,500 square-foot studio. Weber’s piece would be one of several works and performances created especially for the benefit, as a complement to the Mike and Mike installation. Weber instructed us to offer our fuzzy bodies up to guests for hugs, pets, and dances, but “nothing sexual.” We were also encouraged to behave as though we were in the midst of our own ecstatic voyage of growth and discovery. Following our furrie rehearsal, I wandered around the exhibition. Co-produced by West of Rome and the SculptureCenter (which exhibited the piece last year in the Long Island City neighborhood of New York) A Voyage of Growth and Discovery (2010) is a grand-scale multimedia installation based on the adventures of Michael Smith’s diapered and bonneted alter-ego, Baby Ikki, at the Burning Man art festival. It is noteworthy that none of the materials produced by West of Rome, the Sculpture Center, or the Mikes mention Burning Man explicitly. The press release simply describes the voyage’s setting as “an annual art event and temporary community based on radical self-expression and self-reliance in Nevada’s remote Black Rock Desert.” Installation at Burning Man 2008, via Fantasticus.com

Most viewers and critics overlooked this pointed omission of the loaded “B” word, instead using their response to the exhibition as a platform to condemn or defend Burning Man. I intend to do the latter, but that will come later.

Meanwhile, I believe that by masking the name of the largest art festival in the country, the Mikes intended to present their piece as a self-enclosed, original exhibition. Indeed, the most compelling element of the show is the other “B” — Baby Ikki. After 30 years of transforming from his adult self into a mute oversized toddler, Michael Smith is totally riveting as the story’s infant protagonist. Six hanging screens form a circle around the center of the space, displaying footage of Baby Ikki teetering through tricked-out dance floors, stilted fire-spinners, makeshift tetherball courts, and blinding dust storms. In general, the two and-a-half hours of footage focuses mostly on Baby Ikki engaging with his own toys or other participants, and we barely glimpse his interactions with the mammoth sculptures, bizarre structures, and elaborate theme camps that make Black Rock City the only town in America made entirely out of art, and distinguish it from your run-of-the-mill neo-love-in/apocalyptic rave. But Kelley and Smith do offer viewers the opportunity to interact with the artists’ own Burning Man-inspired sculptures. If there is a dominant architectural style throughout Black Rock City, it would be Buckminster Fuller’s modular structures, which lend themselves to building and removing a 50,000-person city within a week. Michael Smith explained the process to For Your Art:

Mike [Kelley] designed most of the installation after looking at the structures of the various camps at the festival. Many of the structures are based on Bucky Fuller geodesic designs, which are very efficient and practical for these temporary structures. As for the playground equipment, the camps at the festival usually have some sort of theme attached to them. Since we were working with Baby Ikki it seemed natural to use playground structures. Considering Baby Ikki’s pre-lingual state, I would say he’s a bit young for monkey bars, but one of the more successful pieces is an over-sized rocket fashioned from metal rods, and adorned with a string of plush animals that dangle from the structure’s phallic apex. Though the installation is about the same scale and style of a Burning Man theme camp, it fails as a simulation, or even satire — but we’ve already established that the work is about Baby Ikki, not Burning Man. As an autonomous installation, buoyed by the original score and schizophrenic projections, the piece gains traction.

Two days later, it was showtime. I found that channeling the ecstatic state was quite natural as my giant clawed feet led me precariously around the dark and noisy installation, and blinking lights bombarded me through the narrow window of my parrot beak. As gala guests trickled in, it began to feel as though we were populating a set for a bizarre musical. Or maybe that’s because I was in a costume … though everybody else was, too. After entering the space via a sterile-looking room — set with the trappings of a pediatrician’s waiting room, complete with toys, ugly couches, and parenting magazines — guests were given hand-embroidered bibs bearing his or her first name. They could then proceed to the main installation area, where costumed performance artist Stanya Kahn shouted each guests name back at them through her megaphone.

Retreating from the glare of the megaphone, gala-goers found themselves wandering through the various sideshow rooms, starting with a nursery populated by very attractive adult babies, tended to by a dominatrix nurse. Further down the hallway, guests stumbled upon my furrie compatriots in the “Furrie Womb” — a room whose walls, floor and ceiling were covered entirely by brightly colored fur. We split our time between the buzzing exhibition area and this special fur-filled chamber, where we were alternately gawked at by less adventurous guests, and puppy-piled by the likes of the legendary Ya Ho Wha 13 (who performed at the end of the evening). Marnie Weber with Furrie in the “Furrie Womb” at “A Night of Growth and Discovery.” Image via For Your Art.

At first, the benefit guests interacted with the furries sparingly and with great hesitation. But as the night wore on, and the booze flowed through baby-bottles readily, our furry ilk gained momentum. As Jim Shaw’s band whipped up energy, Ms. Parrot danced with the resident art stars, frolicked with collectors, and cuddled curators. Nothing was more riveting, however, then when the Mike Kelley-conducted drum circle reached a crescendo and Baby Ikki emerged, white crocs and all. The crowd swayed, entranced, as Ikki delightfully stomped various cakes into a giant wok, and offered his masterpiece to the crowd for tasting. Baby Ikki’s performance at “A Night of Growth and Discovery.” Image via westofrome.org.

While the evening achieved moments of palpable collective transformation, the ultimate divide between passive art consumer and agentive art work/performer never broke down completely, the way it does at the “annual art event and temporary community” that inspired the exhibition. Burning Man’s structure (or lack thereof) obliterates any possibility of spectatorship. Even if you are not one of the thousands of artists erecting a tangible sculpture on the dusty flats, you are forced to make something new, since each year the city rises from nothing.

For almost ten years I have been ferrying myself across the gulf between the contemporary art world and that of Burning Man. I’m happy to shuttle between the two art systems, but I’ve always been vexed by the commercial art world’s general disinterest in the festival. Shouldn’t individuals who spend their lives making, studying, or selling art take some time to check out the only city in the world that’s made entirely of art? You spend the week living inside giant art pieces, you drive in moving sculptures, you look out onto the second flattest area of the country and there are multimedia installations as far as the eye can see.

I suppose I cannot blame the art world for its lack of Burning Man knowledge. The first time I went, I didn’t even know that they burned the 40-foot man sculpture at the end of the week. All I knew was that there was some kind of big celebration of art in the desert, and art and desert are two of my favorite things — with celebrations coming in a close third. Or maybe it’s a three-way tie. Regardless of my own predilections, celebration is the only part of the equation that Burning Man outsiders seem to process, visions of glitter pasties, LSD tabs, and glowsticks dancing in their heads. 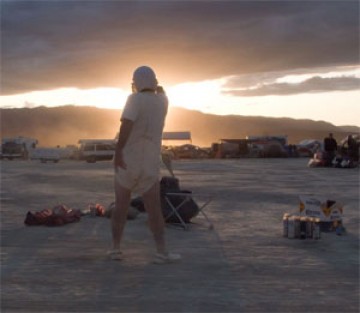 Mike Kelley and Michael Smith, “A Voyage of Growth and Self-Discovery.” Production still courtesy of SculptureCenter, 2009. Image via HaberArts.com

But those expecting a simple psychedelic party will be turned upside down and inside out, as you cannot assemble 50,000 adventurers in one place and get a unified experience. Baby Ikki encounters only one slice of the pie — Burning Man is a dizzying amalgam of countless subcultures. The community-loving enviro-hippies scoff at the escapist euro-rave partiers. The post-apocalyptic anarcho-steam punks laugh at the hippies. The pyromaniac desert cowboys prank the punks. And back on-the-grid, career artists and critics alike bristle at the idea that all this is happening without their permission. Institutional (dis)approval aside, art, in all its glorious plurality, has been the driving force throughout Burning Man’s 24 years of growing, shrinking and transmorgification. The only constant, of course, is the collaboratively constructed man sculpture at the center of it all.

So even if Voyage’s relationship to Burning Man is tentative and a bit opaque, I’m glad that Babi Ikki made the trip. Who knows when the two worlds will collide again on this scale. In the mean time, the Mikes have given us a lot to chew on.

Burning Man aside, the whole setting made for a great maiden furrie voyage. After the event, I received the following email from a friend and gala attendee who had deduced my human identity: “Last I saw the big parrot was rolling around on the floor … Hope you had an okay time in there!”  I sure did. Furrie Parrot participates in Marnie Weber Performance at “A Night of Growth and Discovery.” Image via West of Rome Public Art.