Tsherin Sherpa has a unique background. Trained as a Tibetan thangka painter in Nepal, he was raised within a specific regime of mark-making, proportion, and subject. Embedded in that tradition is the need to preserve and pass on an exiled cultural heritage. As such (and having relocated to California), Sherpa has carved out a practice painting traditional Bhuddist thangka paintings. In the last five ten years, however, he started working outside the traditional confines he’d inherited, embarking on a course of personally expressive work. Transferring the aesthetic of his background into the relative freedom of the contemporary art context, Sherpa currently maintains two styles at once. For that, and in both spheres, he has achieved some real success. He has exhibited internationally in a variety of museums, he is represented by a gallery, and worked on a national ad campaign. Every aspect of his work has begged a delicate balance of reflection and production. In the following interview, we talk at length about the the process of Sherpa’s development and the relationship he has with its course. Caroline Picard: Could you talk a little bit about your background and what your artistic training was like?

Tsherin Sherpa: For a couple of generations, my family had been creating traditional art. My father was originally trained under his uncle.  In turn, my uncles, my dad’s cousin, and I were handed down this craft [thangka painting] by him. At the age of 12, I began studying this art form during my school breaks.  Growing up in Nepal, I was immersed in Buddhist culture and iconography.  Even though I was not a monk, I studied Buddhist scriptures in a nearby monastery.  So, alongside the traditional art, I was seeped in the meaning of it.

As for the process of learning thangka painting, the traditional training begins by creating specific measurement grids for the Buddhist deity. Once that is understood, then we learn paint application and fine brush stroke detailing.  The basics took me about 5 years then I continued perfecting my skills for many years.

Only in the last few years did I begin experimenting in contemporary forms. CP: Do you find it easy to maintain two professional personas? As a traditional thangka painter, the other as a contemporary artist? Perhaps these personas are not separate to you…are they?

TS: For me, the ultimate goal is perhaps the same, although the process is very different. One requires abiding by all the rules (path) and the other is discovering your own path.

Sometimes if one gets too obsessed with the rules, there’s a danger of getting entangled in that very obsession.  We then become more concerned about not breaking the rule. Because of that, from the traditional art’s point of view, the contemporary work with Buddhist imagery may even get categorized as sacriligious. I am working with some of the images that are viewed as the ultimate portrayal of certain deity. And to manipulate it, is obviously taboo.

However, if we scratch the layer a little deeper, and analyze these Buddhist images, one will find that they are a means to develop a practitioner’s (Buddhist) goal towards enlightenment, which means that the images are not the ultimate goal but rather a vehicle. A representation of a Buddha in 2- or 3-dimensional form is not the actual Buddha. It is a mere representation. And to fall into the trap of perceiving them to be the ultimate, is actually getting oneself entangled with the rules.

Another problem is the GAP between mundane life and spiritual practice. We divide our time for these practices to the extent where they almost appear to be 2 different phenomenon.

I try to incorporate these images of deity as a visual vocabulary in order to explore contemporary concerns and situations. So that the images just don’t just remain on my Holy Alter but actually function in the midst of my day-to-day activity. Hopefully this will help blur the boundary between the Holy and the mundane. Because ultimately, the idea is to understand that these deities are none other than my own enlightened mind.

CP: Similarly, do you feel like the mental state required for making a thangka painting is different from that you use when making your other work?

TS: I feel that after painting traditional thangkas for more than 2 decades, I may have become a little jaded. Honestly speaking, the evocation of the enlightened quality by seeing the images of these deities doesn’t easily occur in me. It’s like meditating with crossed leg position on the cushion but your mind is wandering everywhere. When someone sees you, they will see that you’re meditating but I know that my mind is totally out of control. For myself, contemporary work is more like the meditation practice in action since I’m more aware of my mental state.

CP: Maybe about six years ago—I forget when, exactly—but there was that big Jamba Juice campaign, where they incorporated thangkas into a new drink line. I remember talking to you about this years ago and find it to be a remarkable story—would you talk about it here? What it was like to be approached by a corporation? Didn’t you end up consulting with an elder? And then modified your drawings to comply with commercial intention? What was that experience like for you?

TS: Jamba Juice was my first attempt to go beyond the rules. Although I was very concerned with the sentiments of Buddhists, I completely refrained from using any images of a deity. Now when I look back, I see that I was still bound by inhibition to some extent. Perhaps it was also because the purpose of the artwork was exclusively commercial. And it was more of a job than a creative process. CP: Also, I know this must be a difficult question, but–as I understand it the practice of thangka painting and thangka mediation is all about achieving a level of self-less-ness (is that the right way to put it?); on the contrary, I feel like contemporary art is often very much about the self—about an investigation of the self, the authorship of self, and even the persona of that self as it pertains to a public; what has it been like negotiating these differences?

TS: In my opinion, practice of meditation is also an investigation of the self through analyzing one’s action, perception, and the origination of clinging to one’s self. But an additional goal in meditation is to subdue these emotions by understanding interdependence reality and the nature of phenomenon. In a way, contemporary art or any other form of art can also be practiced with a similar approach.

In my view, Buddha was one of the greatest artists. Even after 2,500 years, his self -investigative analysis still inspires and benefits a vast number of people around the world. If the analysis goes deep enough to understand the nature of reality, one will certainly understand how everything existing in this universe is interconnected and perhaps the dualistic view will eventually exhaust by itself. And one will perhaps have humility and cling less to one’s creativity, knowing that it may have well been contributed to by continuous events and experiences around us. At that point, perhaps there’s no difference between meditative process of thangka painting and any other form of art.

CP: I know that thangka painting is an incredibly rigorous, and meditative practice—one that requires endless hours and painstaking attention to detail. As I understand it, the depictions of deities must be absolutely precise, following a regime of ratio-driven measurements that have been passed down through the ages. I guess I’m really interested in hearing you talk a little bit about your artistic experience working outside such a rigorous structure. 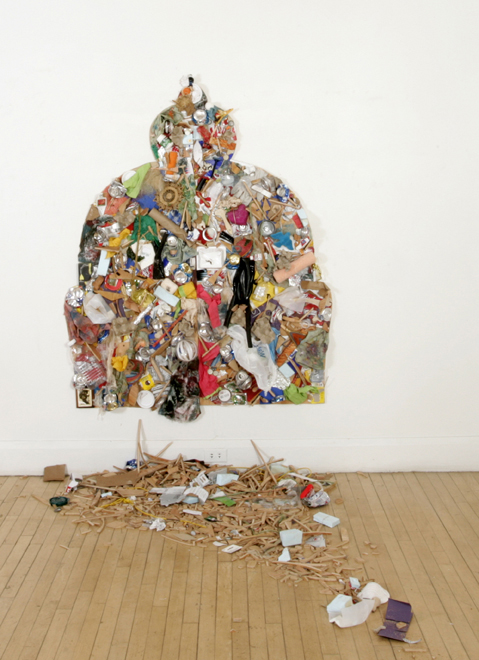 TS: So far, exploring contemporary issues has been very exciting and liberating. I never knew that I had so much to express. I also feel more connected with the younger generation within the Tibetan community. Before there was a sort of disconnectedness. The tradition of thangka painting is almost viewed as cliché by the younger generation. And I don’t blame them. Because of the mass production of thangkas in assembly lines in places like Nepal and India has made the tradition of thangka painting more of a craft and souvenir for the tourists.

And perhaps we are ready for a new medium or interpretation to appreciate our own culture. The 2 major exhibitions (Tradition Transformed: Tibetan Artists Respond at the Rubin Museum of Arts in New York and Scorching Sun of Tibet at Songzhuang Art Center in Beijing, China) have made a strong impact on Tibetans, especially youngsters all over. More and more people are becoming aware of the Tibetan contemporary art movement. The contemporary artists living inside Tibet and abroad are finally able to share the same platform to exhibit their works together. This is a very significant time in the Tibetan art’s history. And I am very excited and grateful to be a part of it.