No Preservatives: Getting to Know Thornton Dial

While I’ve only had the opportunity to call him Mr. Dial a few times, his friends call him “Buck.” Over his 82 years of working and living in Alabama, he’s probably been called a lot of other things and his artworks have been categorized and labeled in a variety of ways. Many in the art world haven’t heard of him, but I think all of this is about to change. Hard Truths: The Art of Thornton Dial opens on February 25th at the Indianapolis Museum of Art. Along with the corresponding book, this exhibition, which is curated by Joanne Cubbs, will show Dial as an important contemporary artist working in the 21st century.

Dial is an artist who helps to represent a generation of Americans that are fading into a history that still hasn’t been properly recognized or written. His artworks serve as a kind of visual direct-action on the politics and culture of the United States, and deep personal explorations of friends, family, and self.

Working along side my conservation colleague, Kathleen Kiefer, and many others involved in the project, including IMA Chief Photographer Hadley Fruits, I’ve spent a lot of time looking at and caring for Mr. Dial’s artworks. Having had this experience I know that his artworks work best when you stand in front of them. Images, books, and videos simply don’t work as well. The three of us first met Dial back in 2009 when we visited him and members of his family at Dial Metal Patterns in Bessamer, Alabama.  After spending a week examining and documenting his artworks in the warehouse of the Souls Grown Deep Foundation in Atlanta in preparation for the IMA exhibition, we drove with noted collector, researcher, and writer William Arnett to meet Dial. (Arnett and his Foundation are most well-known for bringing the exhibition Quilts of Gees Bend to the Whitney Museum in 2003.)

My goal in setting up this meeting was to have a conversation with Dial about the process and materials from which he makes art. I wanted to develop a theoretical framework for our conservation approach, a practice I work through for all contemporary artists.

While this afternoon was productive and informative, in the end what we all took away from that experience changed the way we understood this artist and the importance of seeing his work properly represented inside museums.

Beyond working on actual artworks, talking with living artists is one of the best parts of my job. In my relatively short career I’ve had the opportunity to speak with a lot of interesting artists, but none like Dial. He’s like no other artist I’ve ever met, or even heard of. While he’s made things his entire life, it wasn’t until he met Arnett that he began making artworks (this story is well-told in the documentary Mr. Dial Has Something to Say, and other places).

He’s different in that he has but a minor interest in the “art market” and all that goes along with it.  He certainly never has had a plan to move to New York, or anywhere else to further his career.  His interests remain directed towards creating new artworks and living life.  It is really quite simple.

Working on this exhibition has reminded me of one of the most important theoretical underpinnings of caring for artworks: the best way to care for an artwork is to care about an artwork. 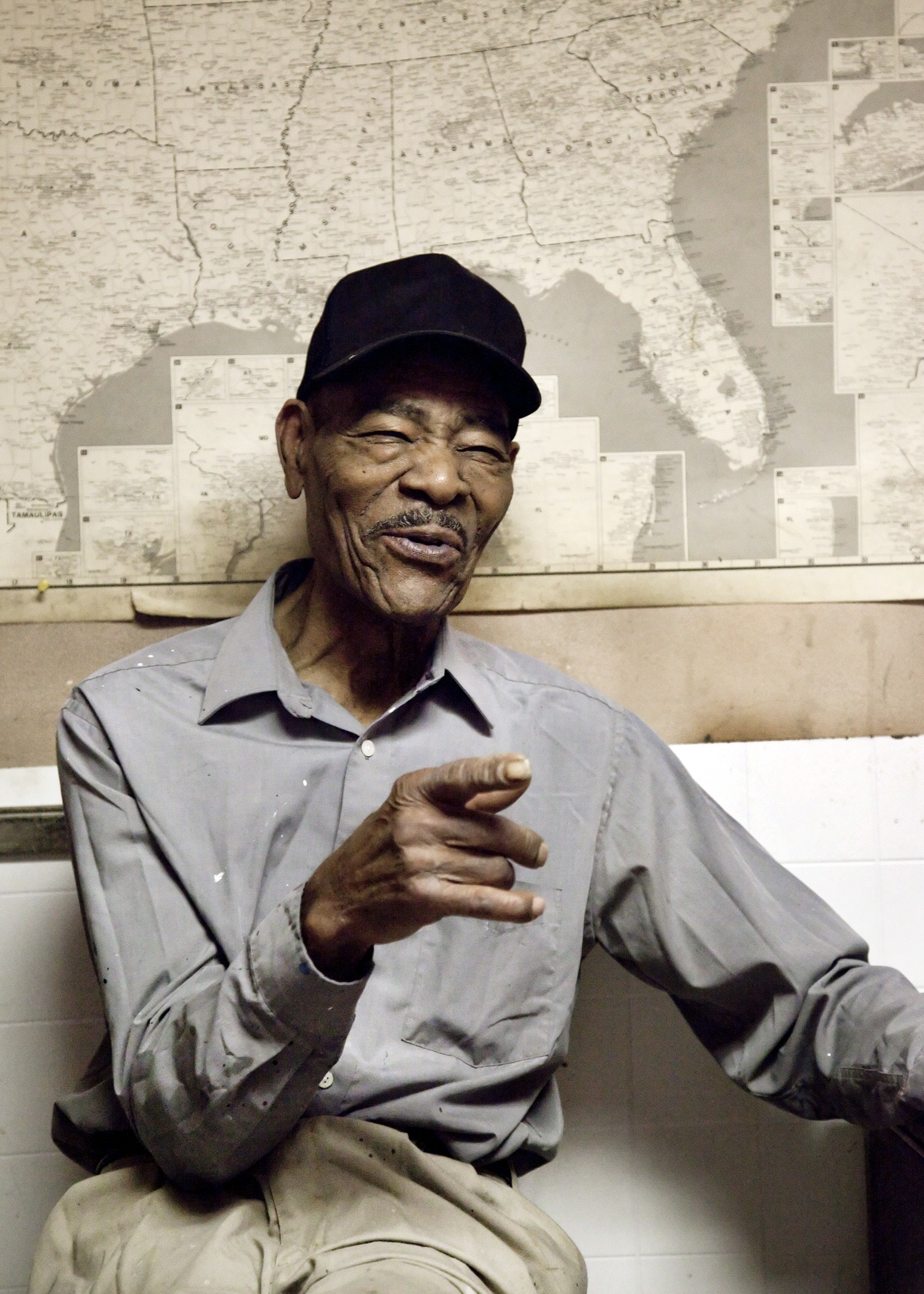 There are many examples of folks caring too much, and even the wrong way, about an artwork. But this is not what I mean. I mean that to care for an artwork, to be an effective art conservator, curator, or any other arts professional responsible for caring for art, you have to understand not only from what and how an artwork was made but also the context in which it was created. You have to understand what it’s supposed to do, how it’s supposed to work when it’s represented.

With this in mind, it’s much easier to want to look and explore the material complexities of Dial’s work. His genius is in the creation of complex surfaces from the materials he’s collected. He uses techniques that he’s invented, or learned working in the field, on the factory line, and at his home. While some artists remain stagnant in a technique or material they’ve mastered, Dial does not. It seems as if each piece represents not only a unique idea, but demonstrates a new process and technique to create a different authentic surface.

Before working on this show, I didn’t understand much about the South. Sure, I took a few African-American history courses in college, studied the Civil Rights Movement, and read W.E.B. Dubois, Flannery O’Conner, Langston Hughes, Richard Wright, Toni Morrison, and others, but the closest I ever got to the real South was passing through it.  Meeting Thornton Dial and his family has been one of the most incredible experiences of my career and knowing the folks at the Souls Grown Deep Foundation and spending time with their collection has altered the way I see the South and American culture.

I considered putting a few images of Dial’s works in this post, but decided against it.  You should come see them in person.