The Complexity of the Do-Over

There is something strangely satisfying about the act of repeating. Perhaps this is because as children we begin our lives mimicking adults to learn language and behaviors that are essential to succeeding as a human. In these early years, many of us pleaded to hear the same stories over and over again, establishing power, through recognition and memorization, over the printed words we could not yet read for ourselves. This comfort in taking the road more traveled does not entirely leave us as we mature. As adults, most of us appreciate some form of structure in our lives in which we can expect certain outcomes. I, for one, have been known to consistently follow the same routes to minimize the stresses of driving in Los Angeles. This kind of behavior simultaneously reinforces two opposing mental processes: the mindless repetition of and conversely, the deeper understanding of something already learned.

This human repeat tendency has not gone unnoticed by moviemakers and its implementation has many names: remake, reinterpretation, do-over, reboot, cover, shot-for-shot, reimagining. At its worst, the remake is attractive simply because it is easy for both the creator and the audience. The initial work has been completed, judged, and perhaps passed the test of time. Many remakes are considered lesser accomplishments than their originals (e.g. Psycho, The Karate Kid, Godzilla, Planet of the Apes, The Wicker Man), but even those that fail to impress have succeeded in adding another layer to the stories they reinterpret by showing us a parallel universe where things could have happened another, perhaps less cinematically viable, way. 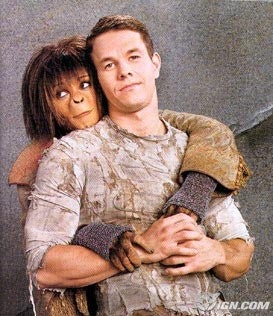 Helena Bonham Carter and Mark Wahlberg in Planet of the Apes.

Of course artists also involve themselves in the business of reinterpretation, but most would likely admit that such endeavors are aimed at provoking thought rather than coddling comfort in familiarity. Explicitly the former, Pierre Huyghe’s work, The Third Memory (2000), explores the complicated memory production of individuals in relation to the shared cultural memory, fact, and fiction of television and cinema. Dog Day Afternoon, directed by Sidney Lumet and released in 1975, is based on the true story of John Wojtowicz, who attempted to rob a bank in Brooklyn to pay for his lover’s sex reassignment surgery. In The Third Memory, Wojtowicz re-enacts the events preceding his arrest on August 22, 1972 using stand-ins who follow his directions within a minimal movie set version of the Chase Manhattan bank. The video interjects television news footage of the original robbery and scenes from Dog Day Afternoon in which Al Pacino plays Wojtowicz.

"The Third Memory" by Pierre Huyghe, 2000. Photo by John Abbott.

﻿﻿﻿One can only wonder how time and, perhaps even more so, recorded media has affected Wojtowicz’s memory of his own experience. While in prison, Wojtowicz sold the rights for his story only to later campaign for greater compensation, complaining that the hostages had received some of the profits and that he was “a millionaire living on welfare.” He was vocal about discrepancies he observed in the resulting movie saying it was only about 30% accurate, but praised the portrayals of himself and his lover by Al Pacino and Chris Sarandon respectively. Twenty-five years later, Wojtowicz confessed in The Third Memory that he and his cohorts had gone to Times Square to watch The Godfather, also starring Al Pacino, just before robbing the bank. The trip to the cinema was meant to “rally the troops” which then inspired the idea to write a note that would be left after the crime was committed. Clearly Wojtowicz already saw himself as an Al Pacino character long before Dog Day Afternoon and in some way he was playing Al Pacino on the day he robbed the bank. In his retelling of those events in The Third Memory, Wojtowicz slips by saying “in the real movie” when talking about his own lived experience.

Artist and writer Tom McCarthy constructs a strikingly similar cycle of repeated re-enactments in his novel, Remainder, first published in 2005 by Metronome Press and initially distributed in galleries and museum shops. The story follows an unnamed man who receives £8.5 million legal settlement after something falls out of the sky onto his head. The resulting trauma makes him feel estranged from the world as he realizes that he has always been acting the role of himself:

I’d always been inauthentic. Even before the accident, if I’d been walking down the street just like DeNiro, smoking a cigarette like him, and even if it had lit first try, I’d still be thinking: Here I am, walking down the street, smoking a cigarette, like someone in a film. See? Second-hand. The people in films aren’t thinking that. They’re just doing their thing, real, not thinking anything. Recovering from the accident, learning to move and walk, understanding before I could act — all this made me just become even more of what I’d always been anyway, added another layer of distance between me and things I did. Greg was right, absolutely right. I wasn’t unusual: I was more usual than most.

Although seemingly more self aware, the protagonist here is much like John Wojtowicz. Both act out their lives as if they were being filmed and both liken themselves to iconic male actors known for their tough, sometimes criminal and brutal, leading roles. As in The Third Memory, the protagonist begins to reconstruct his past after a crucial moment of déjà vu affords him a fleeting glimpse into his own faded and distorted memory. Using his newly acquired wealth, he does this literally by rebuilding the physical spaces from his pre-accident life and filling them with actors playing the appropriate roles, thereby spurring more memory flashes. Instead of approaching a completely reconstructed memory, the re-enactments take a turn when the protagonist begins re-enacting scenes which have only just occurred, becoming increasingly more violent, as he becomes obsessed with reliving and, in a way, fictionalizing his own life. This escalates into a scene triangulated somewhere in between Dog Day Afternoon, the actual bank robbery that inspired the film, and Huyghe’s The Third Memory. The protagonist devises to re-enact a bank robbery that has not yet happened in a real bank with actors who have already rehearsed their roles, but are unaware that the bank is not a set.

In the loosest sense, Remainder could be considered a renovation, as it seems to be informed, and perhaps inspired, by The Third Memory. At the very least McCarthy’s novel adds another layer to the complicated performance of self, mined from one’s own imperfect memory, that is apparent in Huyghe’s video. Both works suggest that we are not unlike these bank robbers. We too are exposed to media that influences our memories, but these experiences are not necessarily distinct and cannot be easily plucked from the mind’s woven continuum. Nor are they inherently less real.