Open Enrollment | Kate Hartman Talks to Herself … and the Art21 Blog

One recurring conversation in art school is the difference between art and design. Nowadays technology has also been thrown into the fray. Artist and educator Kate Hartman has the pleasure of having to tread between the three. Her body of work explores human communication by creating hilarious and absurd wearable technologies such as muttering hats or wearable walls. She is part of the team that developed Botanicalls, a device that allows neglected plants to call and send Twitter messages for assistance. Additionally, Hartman has a knack for breaking down and explaining rather difficult concepts, so it was quite natural for her to start teaching right after graduate school. 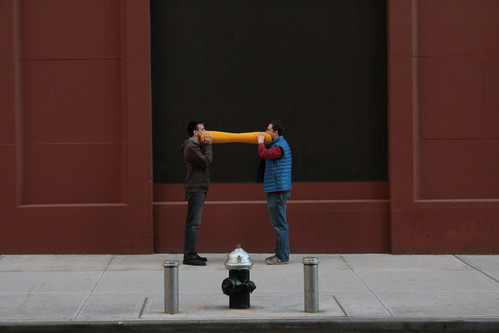 Recently, the OCAD University Digital Futures Initiative targeted wearable technology as an interest of students but did not have the capability to run a full curriculum. They hired Hartman as one of five faculty to help develop the digital futures program and thanks to their contribution the graduate program is about to launch in the fall and the undergraduate program will fully launch in 2012. Furthermore, after revising a course on wearable technology she was able to develop it as an undergraduate minor. Its first batch of students will graduate within the next few years.

Hartman is also an adjunct professor and alum of the Interactive Telecommunications Program (ITP) at NYU Tisch and I sometimes catch her wandering the halls. I had some wearable tech questions of my own and Hartman told me she was available to talk. I took her up on the offer and managed to snag a short interview as well. At one point in our discussion, writer and new media maven Clay Shirky interrupted and asked, “Are you doing independent design work?” “Sure,” Kate replied confidently.

Antonius Wiriadjaja: Did you ever take a class with Clay?

Kate Hartman: No. Clay and I became friends after I graduated. He liked my thesis and we started talking. I never got to take the classes that I wanted to take at ITP but I just ended up working with the creative people I wanted to anyway. I made up a project with Shawn Van Every and Tom Igoe at some point that was all about using [the open source telephony software] Asterisk with networked objects, which ended up becoming part of Botanicalls. But it wasn’t a class project. It just happened, which I think is interesting as it probably has formed some of my thoughts about education.

AW: Was Botanicalls your thesis?

KH: No. Just a project that we did. But it’s going to be in MoMA this summer. We’re really pushing to try to get the kit into the design store because we want people to use it. It’s not meant to be something just on display. 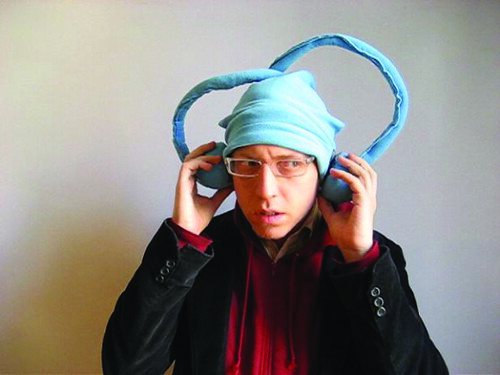 AW: Your work shows your interests in how people communicate, but I can’t really categorize them simply as works of art or technology.

KH: My personal practice sits between a lot of fields. A lot of it can be posed as art, but some of it is very applied. Some of these things are meant to be provocations. I make a lot of these kind of fictitious devices that I give to people and I ask them to interact with them. but there are all these different stages that are going on. The initial making of the thing is an act of self expression. The act of giving it out is an instigation. I always think about there being different phases of my work that I create. Some of it falls into a more highly conceptual realm, and some of it is very technical. I jump back and forth all the time.

KH: I love it! I don’t really subscribe to the idea of locking yourself in a certain area of practice. and for me I’m less interested in knowing one thing really well than I am the relationship between different fields and different areas of thought.

AW: It’s true that now almost everyone has the tools to create, but what if the work ends up mediocre?

KH: Well, you need a balance between empowerment and criticality. I think we need both. It’s really important to lower the barrier for entry to get people involved but that shouldn’t subsume maintaining a sense of criticality in the ways in which we use technology and the ways we view art and design. I feel like one of the challenges of some of these movements happening right now is we’re promoting this what I like to call “Yay” culture where once you do something, you go, “Yay!” (laughs). It’s lovely but I think it needs to be clearly identified that that’s only step one. It’s huge to blink your first LED and that should be celebrated. And then you need to go on from there and think about what is an LED. Why are you blinking an LED. Who cares? Does the LED really need to be in the world? How are you going to move on from there? The whole point of getting people to understand how things work is so they can ask the right questions about what’s happening with the tools that are in their lives. 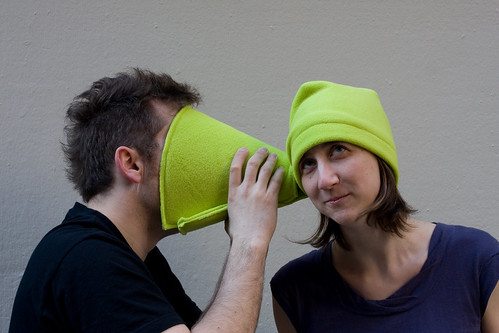 AW: What’s your favorite assignment to give to students?

KH: In terms of working with electronics, my favorite assignment is to have students make a switch that’s meaningful within the context of the body. A switch is the simplest possible interface that you can make. It’s just two pieces of conductive material touching or not, but that can be interpreted in all different kinds of ways once you put them in different contexts and use different materials. My favorite assignment recently from a more conceptual end is to make an interface for a part of your body that you thought was being ignored and that brought on all sorts of crazy stuff. I had students who made interfaces for their Kegel muscles. They made it so you can play music by activating your Kegel muscles. It was really well done. They did three different iterations. One was just an on/off switch. The muscles were clenched and would turn the switch on or off. Another was a gradient, so it would sense how much the muscles were activating. The third you could actually play ‘Mary Had a Little Lamb’. It was wild, but at the same time really interesting. And they wrote a beautiful blog post on women, power and inner strength. They played with all these cultural references. It was great.

AW: I kind of feel bad for anybody who’s ignoring that part of their body.

KH: (laughs) Teaching is great. It’s hard, but it’s a lot of fun and if you end up with the right students it could be absolutely magical. Education is a lot of role playing. Today I’m going to be the professor and you’re going to be the student. A lot of students know more than me, but once you get comfortable with it it becomes really fruitful. Even with my undergrads at OCAD they have all these areas of expertise that I don’t know anything about. They’re really brilliant textiles people and they know all this stuff about weaving and the technology of weaving that i hadn’t even heard of. They walk into my classroom and show me their assignments and I’m awestruck by the things they can do. It’s really cool because I’m giving them things that they don’t know and they’re giving back to me.

Robert Faludi, Kate Hartman, Kati London and Rebecca Bray, "Botanicalls" at the "Talk to Me" exhibition, MoMA 2011. Courtesy the artists.

AW: Are you working on something right now?

KH: We have some projects going on in my lab, and I have some backburner projects that I am going to get to this summer. I have this ongoing thing that I plan to work on in the next decade with glaciers. I latched on to glaciers because of some personal experiences and also because they’re significant icons of climate change. So I started thinking about human-glacier relations and how people and glaciers can relate to each other. I made this glacier embracing suit that I want to distribute to people. I know this great woman. She’s 18 and she’s doing this documentary called An Inconvenient Youth. It’s all about kids and climate change. She’s shooting all over the world and she just borrowed one of my glacier suits to go use it in Nepal. I’m sort of interested in a broader thing of people and to make a set of projects dealing with glaciers. Some of it I want to deal with sensor networks and thinking about data representations and how to interpret it in a really humanized way and how that can be present to us when we’re at places like this, very far away from those changes. The other thing I’m interested in is closeness over distance, just because we’re in the stage of communication proliferation but we still want to be in the same room together. I’m really interested in exploring that further. What’s working and what’s missing. Why do we still have conferences and business meetings and camps and school where we all are sitting together.

Kate Hartman, "Muttering Hat" and "Talk to Yourself Hat" at the "Talk to Me" exhibition, MoMA 2011. Courtesy the artist.

AW: What I like about your work is they could be viable products. I would want a wall that I can carry around with me.

KH: Yeah, and everything I make sometimes get a little confusing because there’s the question of whether or not it’s a joke. I’m very comfortable with the ambiguity of that. Recently I gave this TED talk. This woman came up to me afterward and said, ‘I was sitting in the audience while you were giving the talk and I was cracking up because I thought it was so funny and I was laughing so hard, but the woman next to me was getting so angry at me because she thought it was inappropriate that I was laughing.’ That is exactly what I’m looking for in terms of the response to my work. I think that’s perfect. That discomfort and that range of reactions because a lot of it is playful but playfully serious. They’re both right. For me in terms of whether it’s an art piece or a product, I don’t care. But I am interested in distribution and the multiples. even in these sort of micro situations, what happens when it becomes a societal norm. My fantasy has always been seeing a bunch of people in a subway car all wearing muttering hats. Botanicalls is great because all of the sudden people’s plants all over the world are using twitter and that has become the norm. Everything we’re doing right now is weird. It’s all these innovations and these things that get added to our lives. They’re all weird and should be questioned. Making something a little bit extra weird puts us into that state of questioning, then maybe it brings us back to relating to mundane things like cell phones, reapplied.

“Botanicalls,” “Muttering Hat” and “Talk to Yourself Hat” will be on display at MoMA’s Talk to Me exhibition from July 24 to November 7, 2011.