During the 1980s and ’90s, the city of Los Angeles saw its public spaces radically re-purposed. When the sun went down, strolling the streets and public parks of certain neighborhoods became a perilous activity due to increased gang violence. As a child, my family’s penchant for Langers‘ “world famous” deli sandwiches led us to frequent the Westlake area just west of downtown LA. The deli, established in 1947, is directly across the street from MacArthur Park and is just three blocks from Lafayette Park, now home to the Los Angeles Police Department’s Rampart Division.

In all the years that I’ve been visiting this area, I have never ventured into either of the parks. The neighborhood’s notorious gang violence has led the deli to offer curb-side ordering, so patrons don’t even have to leave their car. In recent years, however, crime rates in the parks have been decreasing. The improvements cannot be credited to stricter gun laws or to increased police presence:  it’s because of fútbol, or soccer. The fútbol leagues and pick-up games have become so popular they have actually deterred crime in some of the most dangerous neighborhoods in Los Angeles.

These games and leagues are documented in the beautiful compendium Municipal de Fútbol. The edition was published by Christoph Keller Editions/Textfield in 2008, and contains two essays written by Jennifer Doyle (who pens the soccer and social politics blog From A Left Wing). It was designed by Jonathan Maghen, with photography by Michael Wells. Municipal de Fútbol stands out on a bookshelf due to its unusual oversized packaging. All of the book’s contents are housed in a green, cloth-bound box with white printing, so that the box itself resembles a soccer field. This minimalist construction is actually what first drew me to the book, and its overall design is what led me to add it to my collection (I know very little about soccer aside from my days in youth soccer leagues).

The box houses two small books that are bound in the same green-colored cloth and contains an oversized poster and lithographs by artists As-Found, Arthur Ou, General Idea, Jakob Kolding, Jonathan Monk, Mari Eastman, Michael Well, Peter Piller, and Roderick Buchanan. It also includes an Adidas jersey. To put it lightly, there is a lot of stuff contained in this box, yet it all fits together perfectly, aided by black ribbon-pulls that help you leverage the contents out of the box.

Municipal de Fútbol was printed as a limited edition of 1000, although there are no distinguishable edition numbers on any of the items. On the spines of the two smaller books are the numbers one and two. Book number one, also entitled Municipal de Fútbol, includes documentary shots of fútbol games around Los Angeles and an essay that appears in both English and Spanish written by Doyle.  Book One is a bit more of a summary of soccer-playing in Los Angeles, while Book Two, titled Lafayette Park, focuses specifically on the leagues themselves and the games that are played in the park. The photographs in both of the books highlight the player’s acrobatic movements while documenting some of the tensions that arise between the competitive teams. Because so many of the games take place at night, these photographs are lit only by a few stadium lights on the field. It’s ironic that, as a result, the games appear under-lit, when in fact these very lights, along with the players, are precisely what has helped deter criminal activity in the area. In her essay for the LaFayette Park volume, Jennifer Doyle notes:

“It’s been said that you can’t make art about fútbol, because the game is itself an art. The worry is that art about fútbol will always risk becoming something like a book report–a one-dimensional take on a four-dimensional experience. There is some truth to this.”

Doyle’s observation may also explain why the accompanying lithographs feel so out-of-place with the rest of the book’s materials. Consisting of a total of nine prints whose subject matter varies–from an image that depicts three seals lounging in the snow, to group shots of fútbol teams–the prints are uneven and feel secondary to the books, poster, and jersey. Although many of the images only loosely relate (at best) to the overall theme, Peter Piller’s von erde schöner and Michael Wells’s Untitled, 2008, both provide beautiful landscape shots of the sparse dirt fields as they appear mid-game. I wish that there were more such photographs accompanying Municipal de Fútbol, because they provide a wider plane from which to view the games’ spectators, players, and referees, as well as its landscape. When viewed via Google Satellite, the grassy fútbol field in LaFayette Park appears strongly contrasted with the dry desert dirt sprinkled with sparse palm trees that surrounds it. Although I have never set foot in the park, to me this image truly feels like Southern California. 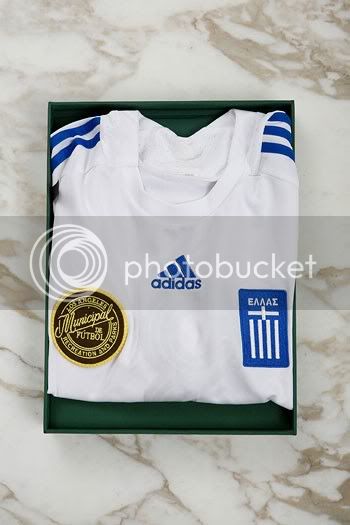 The fútbol jersey’s design varies with every edition, except for the round, brown and yellow Los Angeles Recreation and Parks/Municipal de Fútbol patch sewn on the right chest of each shirt. It’s a really nice addition to the collection, adding a participatory element that the book and lithographs lack. Since so many of the games documented in the books include people who have spontaneously formed a fútbol team, it makes sense that the jersey metaphorically creates a team beyond those eleven players on the field, as if inviting the reader to go visit the park and join a game. Although the day where I don my own Municipal de Fútbol jersey and head out to the field will likely never come — I really was a lousy player — it does encourage me to walk through the park and watch a few games myself, the next time I eat at Langers.