Open Enrollment | The Pool, the Pants and the Performance This past weekend was ITP’s annual winter show, which marks the end of our Fall semester. I decided not to submit any of my own work because the incredibly slick Yale Evelev of Luaka Bop made my Gamelan Orchestra an offer we could not refuse: to play four amazing nights at The Stone, John Zorn’s well regarded experimental and avant-garde performance space.

Yale went to Indonesia for the first time in 1979 and was struck by the casual ambience of gamelan and wayang kulit performances in the villages of Java. “…The audience and the performers were on the same level and interspersed,” Yale explained. “It was magical for me hearing these sonorities up close without the distance of a stage and the normal formalities of a western concert.” He wanted to recreate this experience by pairing us with some amazing acts, one of which I have been following for quite some time.

I first discovered Lucky Dragons, the band/art-collective consisting of Luke Fischbeck and Sarah Rara, while researching fabric capacitive sensors for a touch-sensitive curtain. I was directed to their “Make a Baby” project and became hooked on their music. Lucky Dragons often require their audience to touch each other in order to complete a circuit, creating electronic sound with their interaction. This basic model effectively translates a pure human-to-human experience to the digital world. I once again found myself next to the big gong and directly front and center to their performance. Lucky Dragons tuned their electronic instruments to our metallophones’ pentatonic scale, often blending seamlessly to our music but adding their own sonic signatures as well. After the concert, I gave Sarah Rara our big gong’s offering of flowers. She was reluctant at first, because she had heard the gongs don’t like to share. I explained our gong was very giving and that the wilted flowers would end up in the trash otherwise. She accepted them.

Antonius Wiriadjaja and Valentina Camacho, "The Pool," 2011. Courtesy the artists.

Before the shows at The Stone, I found myself with something I haven’t had in several months — free time. It was great because I had so many things to catch up on, but I ended up spending most of it passed out in bed. My final projects were time-sensitive and site-specific, a combination which led to pure exhaustion.

My Big Screens project, presenting a 12.5 foot deep pool in the lobby of a Frank Gehry building, went well. It was accepted as one of the videos to play in rotation at the IAC, which is great news, except now we have to multiply our 11,520 by 1,080 resolution video to 12,000 by 1,200 resolution, a real rendering nightmare. 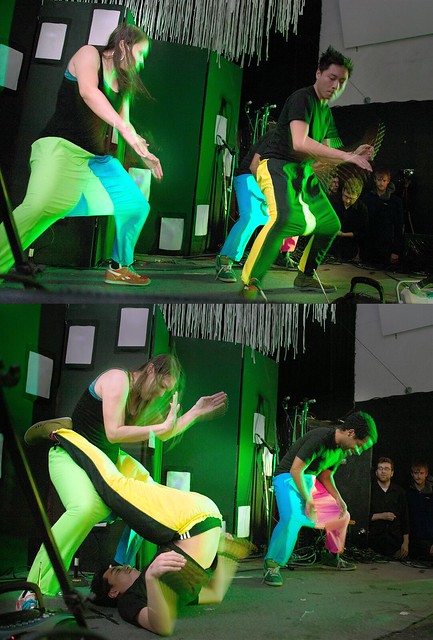 Antonius Wiriadjaja, "Drop It Like It's Crotch," 2011. Courtesy Spike McCue.

My other big project, creating a musical instrument for the 10th annual ITP New Interfaces for Musical Expression (NIME) show at Cameo Gallery, did not go as smoothly because the venue was completely packed. Three performers followed the beat of four musical loops from different genres, broadcast over FM radio. The pants I wore were embedded with piezo discs, allowing me to amplify the more subtle noise of the pants’ fabric. Some of them unfortunately broke in the middle of the set, but we trudged through anyway. Thanks to the strong performers I collaborated with, Michell J. Cardona and Johann Diedrick, the show was a total blast.

But now comes the hard question of what to do next. I can follow up on the pants project for my thesis as a case study of implementing new technologies to traditional ethnic folk theatre. On the other end of the spectrum, my gamelan orchestra is relying on me to ensure new technologies won’t interfere with their classical music, especially for our upcoming Javanese Wayang Kulit (shadow puppet theatre) show on March 16, 2012 at Asia Society. I am grateful for the break between semesters to digest what I’ve learned. Hopefully by January won’t be regurgitating false notions about new media and the traditional arts, but rather gestating a novel model for the two to co-exist. For now, I am happy to simply reflect on the amazing year I have had. There are greater things to come. But they can wait.