A carousel, a 102-foot slide, a swimming pool called the Giant Psycho Tank and a kiosk giving out goggles that make the world appear upside down. This is not a list of rides at Coney Island amusement park, but of artwork in Carsten Höller’s current exhibition at the New Museum in New York City.  And while one may not find a rollercoaster like the Cyclone to ride, the exhibition, titled Carsten Höller: Experience certainly has a carnival-like atmosphere, which is apparent before you even leave the lobby.   The first sign that this museum visit will not be of the ordinary variety comes once you have purchased your ticket, when you are then directed to another queue to sign an “accident waiver and release of liability” form as museum staff advise you to remove any items from your pockets and leave all bags, purses or loose articles of clothing at the coat check or in the lockers provided.  I dutifully initial where necessary on the waiver release form while considering whether or not my cell phone might somehow become a lethal projectile if I kept it with me.  Several museum visitors can be seen wandering around the lobby with Höller’s Upside-Down Goggles on their heads—bizarre contraptions that are part Vito Acconci’s Virtual Intelligence Mask and part Luke Skywalker’s blast shield helmet.  Waiting for the elevator to ascend to the gallery floors feels more akin to queuing up for Space Mountain at Disney World than setting out to view an art exhibition.  And in many ways that’s the point. In Carsten Höller: Experience, viewers become riders and gallery attendants become carneys, handing out helmets and instructing museum goers to keep their hands close to their bodies at all times before sending them off down the corkscrewing, 102 foot chute that ejects them out two floors below.   Shrieks echo through the rooms, and big grins and adrenaline-flushed faces quickly replace the serious, contemplative stares typically found in gallery spaces.  Despite banging my knee on the final turn of Höller’s slide, I must admit that it is an enjoyable, even exhilarating ride, and my friend and I had a fine time comparing experiences and watching others shoot past us down the see-through tube.

Near the entrance to Höller’s Untitled (Slide) there is a slowly spinning carousel one can also ride (Mirror Carousel, 2005) although, like the slide, you must be a minimum height of 48 inches to do so.  Elsewhere, museum goers can inhale fumes from a glass vial containing Phenylethylamine, an endorphin-releasing chemical found in chocolate (Höller’s Love Drug (PEA), 1993/2011), pop mysterious white gel capsules that drop from the ceiling into a bin already filled with thousands of them (Pill Clock, 2011, which comes complete with a water cooler and cups to aid ingestion), and even strip naked and float inside a sensory-deprivation pool in the ominously titled Giant Psycho Tank (1999).

Höller, who holds a PhD in biology and has researched olfactory communication among insects, is very much interested in exploring—and activating—our senses.  Indeed, each individual work is part of the former entomologist’s larger program of foregrounding “experience” (thus the aptly titled exhibition) in both senses of the word: as a direct, practical participation with or knowledge of objects or events that make up our lives, and as momentary occurrence or encounter. Many museum-goers first became aware of Höller’s work on the occasion of his 2007 exhibition at the Tate Modern in London, where several of the Belgian-born artist’s slides were installed in the cavernous Turbine Hall as part of the museum’s annual Unilever Series (watch videos of a ride down one of the slides here).  Although Höller’s massive, shiny tubes are oddly beautiful objects in their own right when installed, the point of these works lies not the sculptural qualities of the slides themselves but in the delight that comes with lying on one of the sliding mats provided and launching yourself down one of the corkscrewing chutes. It is the kinetic experience, as well as the anticipatory delight in watching someone else go down the slides while awaiting your own turn (a quirky, vicarious pleasure that we’ve all probably experienced while waiting in lines at amusement parks), that defines our encounter with the work.  The embodied, participatory experience at the core of Holler’s artistic practice is on full display at the New Museum, and prompted the French critic and theorist Nicolas Bourriaud to champion Höller as one of several contemporary artists pursuing what Bourriaud famously termed “Relational Aesthetics.”

In his 1998 book Relational Aesthetics and his 2002 Postproduction: Culture as Screenplay: How Art Reprograms the World, Bourriaud set out to define what he believed to be a new set of concerns emerging in contemporary art.  He identified several artists whose work represented a shift away from traditional art objects and viewer experiences toward more participatory, communal and socially interactive art forms.  In the work of Rirkrit Tiravanija, Felix Gonzalez-Torres, Pierre Huyghe, Höller and others, Bourriard discerned artistic practices that “operate with the same practical and theoretical horizon: the sphere of human relationships. Their works bring into play modes of social exchange [and] interaction with the viewer…that can to be used to bring together individuals and human groups.”  In short, Bourriard characterized artistic concerns at the millennium as rejecting traditional forms of art production and viewing and emphasizing instead the notion of a social encounter.

Rikrit Tiravanija, for example, uses the everyday rituals of cooking and eating as the basis for his work, cooking and serving Thai noodles in gallery spaces in order to prompt social interaction and communal participation.  As Tiravanija has said, “it is not what you see that is important but what takes place between people.”  On Bourriaud’s account, artists such as Tiravanija and Höller perform micro-interventions into the matrices of traditional power, offering by way of interpersonal relations and communal experience a way out of the self-critical and “artist as genius” models of Modernism.  As Postmodernist criticism revealed, this Modernist privileging of certain formulations of the artist and the art object established hierarchies of aesthetic value, institutionalized certain modes of viewer interaction and experience, and narrowly circumscribed the discourses surrounding them while excluding too much.

Of course, the paradigm shift that Bourriaud frames in his treatises is not as unprecedented as he might claim.  After all, the notion of art as a participatory, multi-sensory environment grounded in social environments and interpersonal relations can be found in various forms in Happenings, Fluxus and other performance-based art movements of the 1950s and 1960s.  But arguments of historical precedence aside, it is easy to appreciate how Höller’s work fulfills Bourriaud’s participatory model of art based on human relations and interactivity.  Indeed, throughout Experience Höller assumes the position of an instigator or, as Bourriaud puts it, the “generator of meaning,” rather than meaning’s creator or exclusive source.  Moving through the New Museum one cannot help but sense the blurring of the boundaries not only between social and institutional spaces but also between artist and viewer. 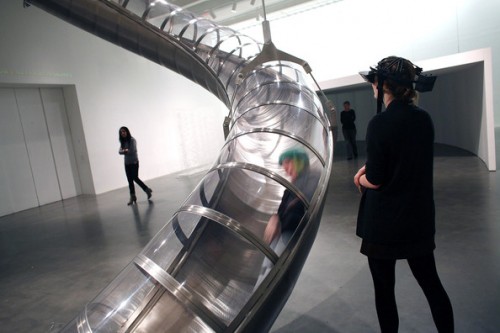 It is easy to dismiss an exhibition such as this as diminishing art to the level of entertainment.  Fair enough I suppose.  But to my mind, the clearest testament to the value and vitality of this more inclusive and expansive model of art is that my mother, who visits museums infrequently, recently called to say that she had read about the Höller exhibition and is excited to go down the slides and ride the carousel when she next comes to New York.  Is not the expansion of the audience for and the discourse surrounding art inextricably woven into the fabric of the postmodern collapsing of such binaries as high and low art, and its challenge to conventional concepts of taste?  And I cannot shake the thought that in the end, it must be a good thing when someone like my mother–who isn’t otherwise overly engaged with the art world–is excited to experience the Höller exhibition.  Hopefully she won’t bang her knee as I did on that final turn of the slide, as I suspect that after we’re done at the New Museum she will want to head up to MoMA to see the Willem De Kooning exhibition, which is second on her list of art-related things to do while in New York.  I’ve already seen MoMA’s blockbuster exhibition but certainly wouldn’t mind going through it again, as that De Kooning was a real genius.  Old Modernist habits die hard I suppose….

Carsten Höller: Experience is on view at the New Museum until January 15, 2012.