Four weeks into my master’s thesis, I’m discovering it is more a test of maintaining focus than of any other skill. That’s a lot to ask for from an art lover in New York. I grit my teeth when I see Michael Clark’s open call for non-dancers for his Whitney Biennial 2012 performance, realizing I can’t commit without giving up time on schoolwork. I’ve had to decline attending some amazing events, from friends performing at CPR NY to giving up Björk concert tickets at the New York Hall of Science. But tempted with the offer of free wine and cheese during one particularly stressful day, I just couldn’t say no. I attended the opening for Luminance, an exhibit of six works of new media at the Paley Center for Media. 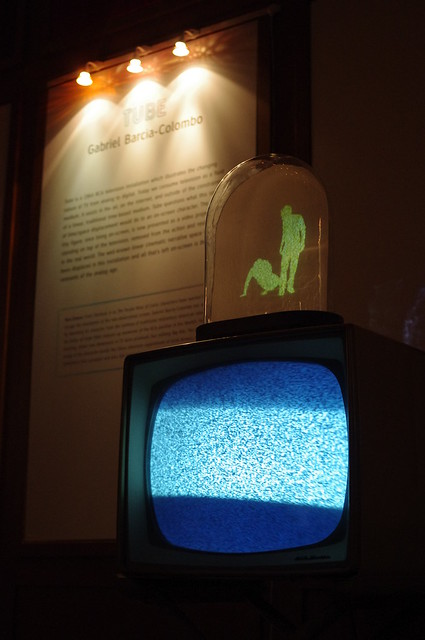 The show is curated by Gabriel Barcia-Colombo, who helped me cut my teeth in video for new media during my first semester of ITP. Barcia-Colombo’s video sculptures engage our fascination with archiving and make us question how to collect things that are not tangible. His answer is playfully literal: he places them in jars. I’m proud to have been part of one of his pieces, Garden, in which I play a nonchalant graduate student who doesn’t really mind being stuck in a bottle until he runs out of coffee. For Luminance, he premiered a new sculpture, Tube, an analog RCA television whose onscreen characters climb up above its static roots using cutting-edge technology.

“The ghostly image of his character recalls the fifties television experiments of Ernie Kovacs, who was television’s first surrealist and who still inspires innovators of the internet generation,” notes Ron Simon, a curator for the Paley Center and a professor of media history. The Paley Center’s mission is to examine the intersection between media and society, and they are very well-versed in the matter. As soon as I entered the building, I was bombarded with popular shows and movies I had always heard of yet had never seen. I was impressed by their willingness to exhibit Luminance, screen-based pieces that provide content very differently from how most of us consume media. Toby Schachman’s Time Travelers, for example, is dependant on the viewer for its content to move forward. The distance of the viewer is correlated with a moment in time, altering a time-lapsed video on a monitor by warping a silhouette of the viewer to that video’s instance. In effect, the viewer progresses the video forwards or backwards in time. As Simon notes,

“Luminance questions how we as humans interact with digital media content in the physical world. From Martín Bravo’s holographic “Skittish” tree that responds to human voice to Molly Schwartz’s imaginary worlds that can be explored through video periscopes, this exhibition explores new ways to experience media off the screen and in three-dimensional space.”

It’s great to see members of my academic community getting recognition and given space to put up their work. Of note, one of the artists is Andrea Wolf, whose thesis I highlighted in an Art21 blog post last year. She is continuing with her tiny and intimate installations that use super 8 home movies, found footage and flea market objects. We caught up during the reception and I’m happy to report she has found a gallery to represent her in South America (and an opportune one in New York is bound to snatch her up soon).

The most appropriate piece to the space is Rui Pereira’s IEM (Insatiable Entropic Machines), an artificially intelligent machine that communicates by playing clips of commercials, popular shows and music videos from the eighties. Pereira gives IEM a clever back story that references Stanley Kubrick’s 2001: A Space Odyssey and the well-noted TV trope that electro-magnetic waves carrying TV signals have been broadcasting Earth’s business to the universe for the last century. With a name that takes a phonetic jab at IBM, it’s nice to point out that IEM is also a technical achievement as well as a poetic allusion to the flow of information that is injected into our collective psyches.

Luminance runs from February 8 to April 1, 2012 at The Paley Center in New York. As expected, once I got a taste of new media work I craved more. I gave up my Sunday, which is usually reserved for doing thesis work, to jam with musician extraordinaire Merche Blasco at the MoMA PS1’s new geodesic performance dome for Share New York. It was great to see Merche bring out some of the old instruments that I watched her built last semester for New Interfaces for Musical Expression, but I did feel a twinge of regret for not bringing my own. All my musical instruments from last year have ripped to shreds; it is a consequence of creating soft-circuits without an engineering degree. But it has electrified me to have something to show next time Share comes to town, yet another incentive to finish my thesis.