KAWS Passing Through the High Museum of Art

I recently attended an event with Brian Donnelly, aka KAWS, who joined Michael Rooks, the High Museum of Art’s Wieland Family Curator of Modern and Contemporary Art, to talk about the current show KAWS: Down Time. During the conversation, KAWS took Rooks and the audience on a trip back in time, covering his progression from doing graffiti tags and pieces on walls, to billboard/bus shelter/phone booth advertisements, toys, large canvases and public works. KAWS had a early interest in urban art and communication–i.e., as a skateboarder and budding illustrator traveling the streets of Jersey City and NYC and reading the information around him as he passed through. The theme of “passing through” is often conveyed in Donnelly’s work. For example, a large sculpture from his Companion series, called Companion Passing Through, is sitting in the piazza near the entrance to the museum. 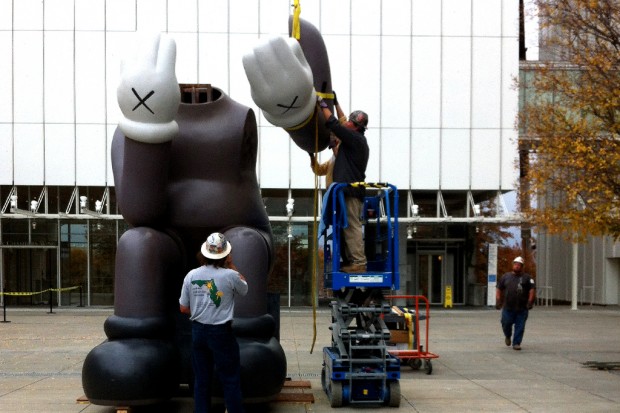 In the early years, KAWS was exploring parts of the city while receiving a mobile, visual and commercial art education. Rooks noted that the experience must have been like sensory overload. Indeed, many of the artist’s paintings are an explosion of simple visual elements that overlap and interlock on the picture plane in complex ways. Skateboarding through different neighborhoods and using different subway stops as destination points to create art enabled KAWS to learn more about graffiti in city space. Donnelly himself refers to this in the talk:

You start to think about different areas or missed areas or opportunities.  You think more about the world we live in and how you can be part of it.

More recently, graffiti and street art has had a revival in popular culture and in the art world, as seen in exhibitions such as MOCA Los Angeles’s Art in the Streets (which I wrote about on the Art21 blog in April 2011), and MoMA’s Looking at Music 3.0. Events such as the Re-Bomonti Street Art Festival in Istanbul, and the work of the Boa Mistura collective in Spain show the global reach of graffiti. However, when KAWS was passing through urban neighborhoods in the 1990s, graffiti was still mostly underground. Growing up at that time, with a historical knowledge of graffiti and access to city walls and trains, had a tremendous influence on the direction KAWS took. He became a part of local and international communities of artists who were often collaborating and trading photos of their work. During the talk, the artist spoke about first wanting his graffiti to reach people in a four-block vicinity, while Rooks noted that his train pieces could also be viewed as moving exhibitions that hundreds, maybe thousands could see. In the mid-90s KAWS began to spend time in the streets photographing his pieces. He was painting on walls and moved to billboards, while thinking about new ways of creating graffiti – referred to as “getting up” – within a specific time frame. “Getting up” originally meant to sucessfully hit a train; today it means to hit up anything, anywhere, with any form, from a tag all the way up to a Wildstyle (abstract) painting. The ephemerality of this work makes documentation necessary because in a short time these pieces are painted over or removed. KAWS, like Keith Haring and earlier well-known graffiti artists before him, considered the materiality of the work – i.e various media and techniques and the connections to time, space and audience. Somewhere in this process, the artists are reading the city as a text. It was Barry McGee (Art in the Twenty-First Century, Season 1, Episode: “Place,” 2001) who gave KAWS the idea of painting over advertisements in bus shelters and phone booths; KAWS began making work he felt was closer to people and often his public interventions were blended so as to look like part of the original ads. In the late 90s, KAWS began to design and produce limited edition vinyl toys that became an instant hit with the global art toy-collecting community, especially in Japan. KAWS’ work started to blur the line between fine art and mass-produced objects not unlike that of Jeff Koons (Art in the Twenty-First Century, Season 5, Episode “Fantasy,”) Keith Haring or Kenny Scharf, making KAWS part of a group of popular artists and subculture heros that use their work to infiltrate a larger audience than that of the fine art world. KAWS’ energetic, pop-inspired canvases include the use of streak-less cel animation paint, which often makes it hard to identify the brushstrokes in KAWS’ paintings. This is consistent with his other mass-produced work. Again, the materiality, or commercial media and methods of artistic production, is at the forefront. KAWS also spoke about the influence of pop artists on his work but, in my opinion, he could have mentioned some of the older graffiti artists like Futura (formerly Futura 2000) and the late Rammellzee (whose work will be on view in MoMA’s Printin’), who were making toys and plastic sculptures in the early 90s. Rammellzee created Monster Models and Garbage Gods out of urban detritus and action figures. The newer processes and avenues of art production tap into mass media and commercialization in ways that many veteran graffiti artists were not able to get into in the 80s and most of the 90s. KAWS’ mass produced toys were a bridge to making larger canvases with characters and public sculptures. The artist talked about the influence of Jeff Koons on this work – i.e. the mass production of sculptures (toys) and other products. KAWS spoke about the influence of H.C. Westermann, a printmaker and sculptor who created works that were viewed as scathing commentaries on militarism and materialism, and who also influenced Koons and Bruce Nauman (Art in the Twenty-First Century, Season 1, Episode, “Identity”) Koons seems to be perpetually reinventing himself, as does KAWS, who does not want his work to be boxed into one category or discipline. The dots that connect Koons to KAWS include the former artist’s inflatable lobster, a work which was also inspired by Westermann. KAWS paid tribute to these artists and their contributions during his talk. Another link between Koons and KAWS is appropriation vs. copyright infringement over the use of pre-existing images. KAWS has managed to avoid litigation by ‘kawsifiying’ or subverting famous American cartoons – i.e. SpongeBob becomes KAWSBob and the Simpsons become the Kimpsons. In his more recent work, KAWS pays homage to Westermann by painting a neon yellow-green silhouette of his hero on the canvases. All of these influences cross a spectrum of genres, disciplines and communities of practice, into KAWS’ present work. The pieces presented at the High Museum of Art  merge forms of representation including paintings, sketches, toys and sculptures based on symbolic, linguistic, and performative texts. These forms reveal specific effects of urban environments on the thoughts of an artist who has lived within and passed through them. The newer works are more abstract, still displaying aspects of Scharf/pop-inspired fauvism (wild colors), art as commerce, and Wildstyle graffiti (abstraction, interlocking lines and shapes) – several earlier contributions were on view in Art of the Streets at MOCA LA. Overall, KAWS: Down Time is a notable show, although small in scope. It’s also a departure from earlier work that gave the artist his “street cred” (credibility) around the globe. KAWS is now more firmly established as a contemporary artist who eludes categorization, and this is why it is important to recognize the lesser known art-historical and underground street influences that still permeate his work. KAWS: Down Time may not inspire visitors to go out and see the city as if it were a contemporary art space, but it may introduce new ideas into the discourse.