I’m an artist.  But that’s pretty vague.  I “do music” (I am the singer of a band called Ponce de Leon) and I make these epically long projects that are often variations on musical theater.  But they’re like arty community theater about friars lost on an island, and Ponce de Leon’s son who was raised by dolphins. I really love to draw, but people seem to mainly care about the performances.  So what I’ve done is slipped the drawing into the performances.  Performers wear masks that are cartoon faces that I’ve drawn, and it’s a reference to ancient classical theater traditions and to cheap cartoons.   In this way, I kind of become my own illustrator, which also takes the pressure off of coming up with a profound synthesis of form and content on the page, which always caused me a lot of anxiety while I was an undergrad.  In general, I’m interested in storytelling and experimenting with the ways we tell stories.

Some autobiographical information: I grew up in suburban New Jersey, so I had proximity to The Big City, but without constant exposure to its sophisticating energies.  I had relatives that were hip to the art world, but my immediate family was more into theater and literature.  I had a pretty thorough obsession with cartoons that led me to pore over an enormous volume of Disney concept sketches in my elementary school library as if it was The Book of Kells (they even kept it open, like a dictionary or Bible, on its own pedestal).  Meanwhile, my parents helped throw a wrench into my Disney-worship by developing the darkness of my sense of humor at a young age.  My family considered it a point of pride that we didn’t know anyone else who considered Get A Life family viewing.

All this primed me for a very specific appreciation of contemporary art.  Everything I needed to know about the abject in Paul McCarthy and Mike Kelley I learned from watching an episode of Get A Life at age 13 called “Spewey and Me.”  In this episode, Chris Elliott’s middle-aged paperboy man-child befriends a disgusting and heinous alien.  He names the alien Spewey because of the flatulent alien’s habit of projectile vomiting.  The alien looks like a cross between E.T., a cocroach, and a pile of dog shit.  There is nothing lovable or even approachable about Spewey.  Instead of treating Chris with tenderness, he jumps on him and beats him up.  Every person who Chris introduces the alien to is disgusted, but Chris persists in his delusion that Spewey is lovable and cuddly and his best friend in the world.  The episode is basically a parody of E.T. where the Spielbergian sentimentality is removed and its core of codependence, delusion, and abject grotesquery is exposed.  It’s hard for me to describe Spewey without underplaying him — he was really, really disgusting. 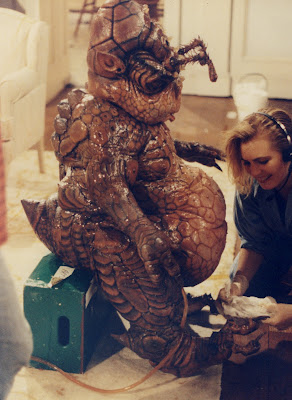 Spewey, in production, at the Van Nuys studio of Greg Aranowitz.

Today I live in Los Angeles, and work at CalArts, and the myriad contradictions of Hollywood vs. Reality, Disney Vision vs. Disney Business, Tinseltown Fantasies vs. Decrepit Sad-Sack Horror Show of Life are constantly being shoved in my face, so I’m glad I’ve been primed for this since childhood.

I’d like to use this blog as an opportunity to investigate marginal entertainment and popular culture that is informed by the avant-garde and fine art, and avant-garde figures informed by marginal entertainment and popular culture.  I don’t mean to rehash Warhol/Lichtenstein ideas of the fine artist repackaging the “low” as the “high,” but rather to recognize and attempt to articulate the nuances of meaning present in popular forms as artworks in their own right, and how that affects artistic thinking.  Call it my attempt at making a bloated, disgusting alien fly, but it’s worth a shot.

Here are some links to things of mine on the internet:

If you’d like to see the best example of Disney Worship curdled by Comedic Abjection, check out my video Live! From the Money Pit!  with Ebenezer MacBeth!

Heretics Lost: A five-episode musical radio play about shipwrecked friars on an island of Bacchus-worshipping maenads, at LibSyn and iTunes.

My Blog: the self-negatingly titled Nobody Wants That where I post music, drawings, thoughts, etc.