When a man loses his faith, the problem isn’t that he believes in nothing but that he’ll believe in anything.

Thomas Demand makes photographs of photographs.  Since the 1990s the artist has produced large-scale photographs based on images culled from mass media sources.  But he does not simply re-photograph this found imagery.  Rather, Demand, who was born in 1964 in Munich and trained as a sculptor, first constructs a three-dimensional, life-size facsimile out of paper and cardboard of the space and objects depicted in the original image.  The artist then photographs his meticulously crafted stage set, destroying his three-dimensional model when he is finished.  As photographs of paper facsimiles of pre-existing photographs, Demand’s art is as much about the conceptual relationship of the photographic copy to the original as it is about the subjects depicted.

Demand’s artistic process and chosen subject matter, however, suggest that something more is at stake in his photographs beyond simply a postmodern meditation on a photograph’s purported indexical association with the real.  After all, for his latest body of work on view at Matthew Marks Gallery in New York, Demand, despite the almost limitless options to choose from, selected images associated with violence, chaos and tragedy.  For Control Room (2011) Demand used a photograph of the inside of Japan’s Fukishima Daiichi power plant, which became known to the world after a devastating earthquake and tsunami left the nuclear plant badly damaged in 2011; Demand’s Junior Suite (2012) is based on a photograph that was originally posted on the celebrity news website TMZ shortly after Whitney Houston’s death, which showed the singer’s last room service meal in the Beverly Hilton Hotel.  Demand’s film Pacific Sun (2012)—the centerpiece of the Matthew Marks exhibition—uses video footage from a near disaster at sea. 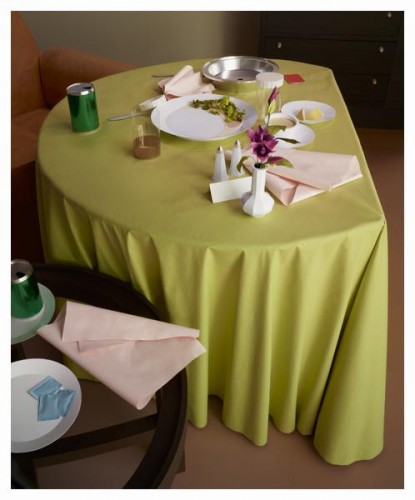 For all of their precise and exquisite detail, Demand’s photographed environments are always devoid of people.  Control Room, for example, shows the interior of the Fukushima Daichi power plant after it had been evacuated. The turmoil and gravity of the impending nuclear disaster, which unfolded in real time on TV sets around the world, is largely absent from Demand’s coldly bureaucratic environment, the presumed chaos only hinted at by the ceiling panels precariously dangling from the rafters.  An eerie stillness pervades Control Room, a ghostly calm that is amplified by the fact that the papers littered on countertops are blank, as are the clock faces and computer screens of the control panels.  It is as if Demand’s room and the objects in them have been scrubbed clean of any index of time, place or identity.

Demand’s constructed spaces are sterile, almost antiseptic environments, and a tension arises between the precision of his constructions and the rather non-descript appearance of those things depicted.  For all of their detail, one cannot help but sense that something seems to have been lost in Demand’s copy of a copy of the real sites of tragedy or disaster.  These are precisely constructed environments drained of any sense of the immediacy, violence or tragedy that propelled the original images into our collective consciousness, and the depletion is palpable.  Indeed, Demand’s photographs turn on the contradiction between the simulated realism of his images and some profound sense of absence, of lack, that pervades them.  It is a contradiction never more apparent than in Demand’s Pacific Sun (2012). Pacific Sun is a film based on a YouTube video of a cruise ship caught in a violent storm in the Tasmanian sea several hundred miles off the coast of New Zealand in 2008.  The original video, recorded by one of the vessel’s CCTV security cameras, shows chairs, tables and other items shifting and sliding across the café after huge waves buffeted the ship, causing it to roll violently.  For Pacific Sun, Demand meticulously reconstructed the café and its contents using paper and cardboard, and then set them in motion using the technique of stop-motion animation.  For each of the 2,400 individual frames that make up the artist’s 100-second long film, Demand slightly changes the position of the various objects in his model and then reshoots it.  When the images are sequenced in a film loop and shown at 24 frames per second, Demand’s paper chairs, tables, lamps and other items appear to tumble across the floor of the listing ship with increasing velocity and force.  The artist has translated video footage of a near tragic situation into a hypnotic and almost whimsical dance of paper and cardboard objects sliding to and fro that is a joy to watch. Demand’s use of video footage culled from YouTube seems an inevitable extension of his interest in exploring the ways in which we navigate and process the flood of images that inundate us on a daily basis.  YouTube is but the latest media platform through which we engage with images from around the globe, offering a seemingly endless flow of images on demand for our consumption and according to our viewing preferences.  On YouTube, the most banal videos are presented on equal footing alongside decidedly more significant ones, and the factors that determine which will go viral and get a million hits is anyone’s guess.

For the past two decades Demand’s work has investigated one of the central preoccupations of postmodern art and culture: the prospect that when we lose purchase on real experience in an image-saturated world, it isn’t that nothing is real, but that everything is potentially real.  In this visual age pictures invariably inform our comprehension, our reality, no matter how incomplete and inadequate those images might be in conveying some truth.  Images have come to frame our experience and our memory of events.  Demand’s latest subjects—an ocean liner in jeopardy of capsizing, the aftermath of an earthquake and subsequent tsunami that triggered a near-catastrophic nuclear disaster—are traumatic events that we vicariously encounter and recall through pictures.  “Things,” Demand once said, “just enter reality through photographs.”[1]  The artist’s latest works are reminders that, as images increasingly become the primary means through which we engage with the enormity and gravity of the real as it unfolds in the world around us, as much is left out of our understanding as is included.  This is not an indictment of the world, Demand’s compelling yet detached photographs seem to suggest, just a fact of life.

Thomas Demand is on view at Matthew Marks Gallery through June 23, 2012.