I’m lucky enough to be auditing a puppetry and performance course taught by the brilliant Ithai Benjamin, a major perk of my post-graduate residency at ITP. One of the biggest draws of the class is getting to meet the brilliant Lou Nasti, whose mechanical displays and animated objects have captured the imagination of millions worldwide.

It was a week after Hurricane Sandy devastated New York’s public transport infrastructure. By that point trains had gotten so unreliable and taxis so rare due to the gas shortage that I got used to bicycling everywhere, including to Lou Nasti’s studio in the middle of nowhere in Flatbush, Brooklyn. One of the staff greeted me as soon as I rode into the gated lot. They had installed sensors that triggered a loud bell–the type that would ring at old high schools and firehouses–any time someone entered. I imagine that Lou himself devised this, and that it rings every morning before 5 am, when Lou gets to work.

Lou greeted us with donuts, a bottomless pot of coffee and an even deeper well of anecdotes. He gave us a tour of his workshop, filled with materials, mechanical parts and tools in various states of disarray. One misstep and you’ll fall face-first into a set of gears or a circular saw. But all of us came out whole, despite Lou opening up every one of his animated pieces to explain how its mechanism works. 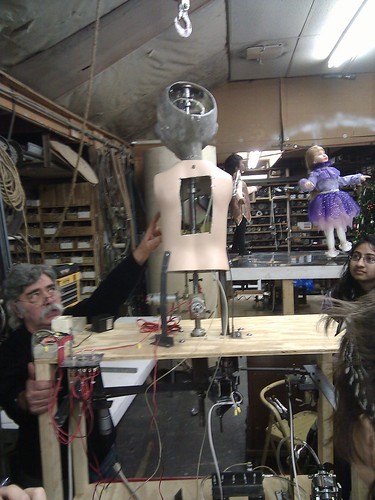 Lou Nasti got his start when he made it to the cover of the New York Times at 19 years old for a robot he had built. “My father was walking around like this,” he strutted around with his chest held high. “They started to call me Gepetto,” he said as he showed off a Pinocchio prototype he was working on and winked. “I wonder why.”

Realizing that he had a special talent, Nasti dove straight into the business of animated displays. Nowadays, there aren’t so many places that can create the kind of work that Lou does. It’s largely because of the demands of the craft–each piece is conceived by, designed by, engineered and created by his own hands. Yet unlike most creatives I know, Lou doesn’t get frustrated that he can only work when someone is funding him–and usually it’s only large companies who can afford it. Building animated displays is his passion and the results of his labor are a source of pride. 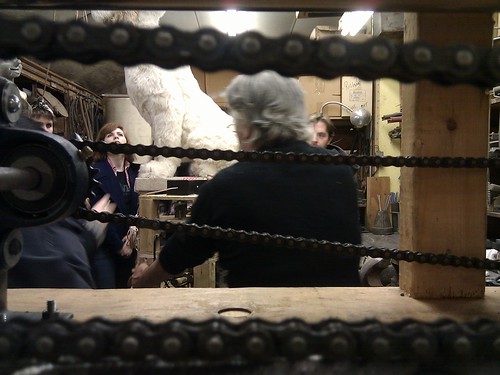 Lou’s latest animated displays had just been installed at the Galt House Hotel in Louisville, Kentucky, and by pure chance, that’s where I was headed for Thanksgiving. The hotel’s social media specialist, Ashley Brauer, kindly showed me around. She wrote up a great blog post, detailing how the hotel had first enlisted Lou Nasti to restore two Dickens characters and ended up asking him to build them an entire Christmas Village and Candy Cane Forest. 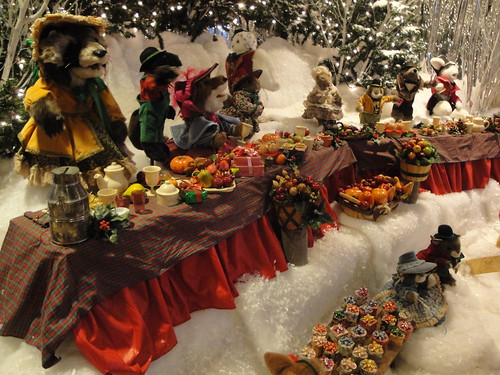 The project started with the hotel’s president Mary Moseley’s wish for a family holiday tradition in Louisville. “Her family would go downtown to see the department store holiday windows when she was younger. This event, Christmas at the Galt House Hotel, is her vision to pass the tradition along.” But Lou’s special touch is far too obvious. “Each figure that talks has a Brooklyn accent,” Ms. Brauer admits.

I got to walk around the displays alone a little later, while a group from a special education school were visiting. They were very excited to meet with Santa Claus. One young woman, around my age, introduced herself to me. “I’m Tanya and yo hablo espanol,” she said. I laughed and explained I couldn’t speak Spanish back to her. Watching Tanya explore the space, I grew quite envious. This is where Lou’s art truly shines – when the fruits of his talent and his audience’s ability to suspend disbelief meld together to create magic.