On View Now | Mark Bradford and the Revival of Abstraction I must admit that I am often disappointed by contemporary abstract painting.  The technical freedom available to and implicit in abstraction would appear to offer entire worlds of possible production, but too much abstract painting today operates within carefully pre-determined formal codes of what abstraction ought to look like, which results in artwork that often uses color and form so as to conjure an aura of meaningfulness yet cannot escape seeming quaintly derivative.  Perhaps the art market and institutions have by now weighed so much so on the freedom of aesthetic production, forming and informing our personal and collective comprehension of what constitutes abstract painting, that today abstraction as a formal category often lapses into familiar territory.

It gave me great pleasure, then, to conclude that Mark Bradford’s monumental new work, currently on view at Sikkema Jenkins & Co. in New York, continues the artist’s almost single-handed revival of contemporary abstraction from its doldrums, and affirms to my mind that progressive abstract painting indeed still has much to offer.  Bradford, who was born in Los Angeles in 1961 and received a BFA and MFA from the California Institute of the Arts, works on a decidedly grand scale—most of the works on view are 102 x 144 inches or larger in size.  Bradford, who still lives and works in L.A., uses as the building blocks for his large-scale canvases commercial posters and advertisements that he scavenges while walking the streets and neighborhoods of his urban surroundings.  The signage that he finds range from the “quick cash for your house” variety that one might see attached to a chain link fence to low-tech advertisements for local hair salons, jewelry stores or check cashing services one often finds pasted alongside or layered over countless other commercial signs on any readily available external wall. Once back in his studio, Bradford glues twine of various gauges to the surfaces of the billboard papers, which he then arranges and layers across his canvas.  The artist then tears away pieces of the collaged paper and sands down its surface using a commercial sander, burrowing down through the dense sandwich of paper and exposing the colorful strata of his source material in a manner that visually calls to mind exposed layers of earth, or perhaps a partially consumed jawbreaker candy. 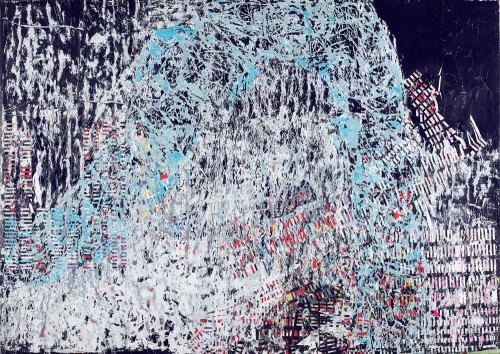 Bradford’s dual processes of collage and décollage results in a volatile pictorial surface, as dynamic webs of color and compound structures emerge from and recede into the densely textured layers of the canvas.  His complex, restive surfaces provide little respite for the viewer’s captivated eye as it works its way around his massive canvases.  Lead Belly and Father, You Have Murdered Me, for example, heave and pulsate as loose accumulations of colors and nebulous shapes give way to crisp arrangements of geometric forms, the carefully-tailored canvases becoming inviting vortices of color and form.

As he translates the rhythms of the urban landscape into increasingly abstract terms, without ever fully abandoning a figurative impulse, Bradford deftly operates at the intersection of abstraction and representation like few before him.  His spectacular frenzies of color and form become visual analogues of the very urban landscape from which he scavenged his materials—poetic visual kaleidoscopes of the communities and underground economies to which Bradford’s inherently referential source material gestures, and the volatile emotional admixture of desires, concerns and vitality that make up the complex socio-economic layers of Bradford’s worlds.  In this sense, the racially tinged titles of Bradford’s paintings—including Them Big Old Titties—seem more propositional than polemical in their oblique allusions to the complex mesh of ethnic, racial and gender desires and tensions that course through the neighborhoods and communities from which Bradford sourced his scavenged materials. Bradford’s improvisational approach to his surfaces has obvious precedents in Abstract Expressionism, while his process evokes such Nouveaux Réalisme artists as Jacques Villeglé and Mimmo Rotella, who used commercial media and décollage to explore the symbolic dimension of urban streetscapes.  But Bradford’s masterful compositions avoid the coolness to which the works of his décollage predecessors are susceptible.  And unlike his Abstract Expressionist forebears, for whom the painterly mark was often an index of the individual artist creating against the pressures of the external world—a reassuring gesture against the anonymity of modern times—Bradford’s self-articulation emerges through the found objects of his modern environment.  His painterly gestures are the sign of an artist producing through and within modernity, not in spite of it.  Pulsing with vitality, Bradford’s monumental webs of color and form gesture to the abstraction of utopian modernism, but his tangled surfaces never stray far from the urban landscape, the here and now.  Bradford is an artist unafraid of virtuosity.  His transmutation of scavenged materials borders on the alchemical, and the resulting canvases are nothing short of spellbinding.

Mark Bradford is on view at Sikkema Jenkins & Co. in New York through December 22.