New Kids on the Block | Far Out with Lisa Sanditz

In 2005, a 64-foot-tall billboard in Lower Manhattan showed a van driving down a mountain against a psychedelic sky. The display was a giant reproduction of the painting Tie-Dye in the Wilderness by artist Lisa Sanditz. The cosmic landscape, composed of real and synthetic elements, was a cuckoo complement to its urban environs in New York City, where, to my chagrin, tie-dye has fallen out of favor. Sanditz likes to travel, see faraway places, and then paint these places in far out ways. She holds an MFA from Pratt Institute and was a 2008 Guggenheim Fellow. Currently, she teaches at Bard College.

The following interview took place via email on March 7, 2013. Jacquelyn Gleisner: In recent years, your work has evolved from imaginative landscapes, high on a hippie/new age sensibility, to more recent depictions of factories and cityscapes. Brilliantly colored tie-dye skies have cleared and murky interior/urban landscapes have become more prominent in your paintings. Can you describe what prompted this shift?

Lisa Sanditz: None of the paintings are strictly imaginative. They are often exaggerated, pushing either a formal or narrative element, generally of a place I have visited or seen. The tie-dye painting for example, was my way of updating the epic technicolor skies of Hudson River School paintings, like Frederick Church’s Twilight in the Wilderness with a more modern psychedelic trope. I painted this after seeing an informal roadside tie-dye sales tent.

So the motivations have stayed the same, but the places I have visited have varied. In the industrial areas I visited in China in 2007 and 2009, the skies were often filled with heavy smog, which I thought of as a polluted extension of the fog often used in Chinese court paintings. Though skies were at times dim in China, the colors there were often saturated as well, with a booming consumer economy and a dizzying array of lights, shops and economic optimism. JG: The series of paintings based on sock and underwear factories in China document a growing international trend of overproduction. I’ve sometimes wondered if the same trend has reached the art world, where artists are also pressured to produce and manufacture their own brand identities. Could you comment on your own ideas of artistic production?

LS: The idea of branding as an artist has been around for hundreds of years, as you know. Artists had busy studios with many apprentices working diligently on the master’s pieces. Now, some artists work this way; others constantly shift directions. Both are viable.

I was particularly intrigued when visiting a factory where artists were painting copies of paintings from reproduction. I watched a young artist paint a reproduction of a Dali painting from a postcard, having never seen a Dali painting in life. It was quite impressive and a phenomenal collapsing of space and time. Wouldn’t Dali love that?

JG: You stated in a recent interview that you think the art world has changed since you shared a studio with a handful of other painters in Tribeca. How do you think things have changed? What new challenges do artists face?

LS: Actually, maybe I’ve changed more than it has. After September 11, I got a studio in Tribeca with friends from graduate school. Real estate was in a liminal time down there—and so was I. I was just finishing graduate school and having my first shows. My community of artists was broadening and still is. But now I spend most of my time upstate, working in my studio and teaching, so the art world for me is a quieter, more intimate one.

Ten years ago, it seemed there was a lot of money, and many people were selling everything off the walls. There is still a lot of money in the art world, despite a rancorous economy. For better or worse, it is still part of the conversation. There were trends in all disciplines of art making and those trends have been replaced by new ones. That cycle will continue.

Certainly, the Internet has connected and divided us. Ten years ago, we were just beginning to troll online. Shortly thereafter there seemed to be a bunch of blogs where people anonymously posted about work—brave and snarky statements comingled. They still exist, but Facebook’s dominance makes it a great billboard for events and fleeting thoughts, though the conversation is not as expansive there.

I show in commercial galleries and move within that world, but one thing I’d like to see change is the casual conversations that happen within it. Often at openings and events, the first question is, “When or where is your next show?” I’d like it to be, “What are you working on?” or “What are you reading?” or even “When did you last eat a great cheeseburger?” 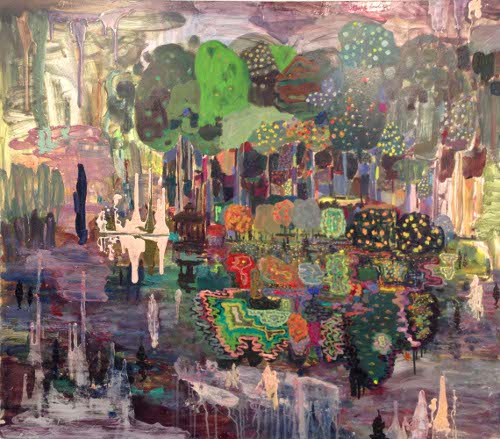 JG: Things have changed yet you are still making highly expressive oil paintings. What do you think the artist’s role is in contemporary culture?

LS: Things keep changing, and there are new subjects to paint daily. A lot changed between Goya and Beckman and both were making highly expressive oil paintings. Wouldn’t we be deprived if neither did? There are many ways to communicate an event or a reaction to something private or public. Painting is the way that I can do it best. (And I don’t elevate myself to the artistic achievements of Goya or Beckman, with respect.)

I paint what I experience, or read about or see in the landscape that seems to reflect some absurdity, or tension or metaphor for the culture at large. I often seek out places that have a compelling visual element as well.  This is because I love to move around and experience the world, go places, meet people, hear their stories—and I also love to paint, no doubt. It’s not in reaction to a highly digitized world, but the refreshing tactile experience of it for me. I get a lot from the real world and hope to put it in the paintings. And I am drawn to this in the work of others. I believe in the power of narrative, whether it’s the narrative in the work or the narrative behind making the work. I am attracted to this in film, photography, and sculpture as well as painting. JG: What’s next for you?

LS: Right now, I am making paintings about food and farming. I have also been working in ceramics since last summer. It’s a blast so far.

JG: Lastly, when’s the last time you had a really great cheeseburger?