Last week, I climbed to the top of Queens county’s tallest clock tower. It was a hard ascent up the rusty metal ladders of the 14-story building—I fear heights—but I was determined not to let that stop me from seeing Chris Jordan’s installation Locost Queue.

Part of No Longer Empty’s site-specific exhibition “How Much Do I Owe You?”, the installation, the artist writes, “projects silhouettes of people photographed in Queens, in a queue, moving across the four faces of the clock tower. The rate of movement correlates to the population growth for the city of New York. A light flashes in the tower at the approximate rate of species extinction on the planet.” The view of Locost Queue from outside was great in itself, but the inside was even more inspiring. A single 1800 watt bulb casts the silhouettes and a motorized hula hoop makes the whole thing go round.

Jordan was a great host—and he happens to have great taste in music. As I walked around the room, a heard a recording of Aaron “Taylor” Kuffner’s Gamelatron playing from Jordan’s laptop. It reminded me that I would have hated hearing this a year ago, back when I was working on my master’s thesis in New York University’s ITP program, completely immersed in my own interpretation of the Javanese Gamelan, and tired of hearing about Taylor’s work. 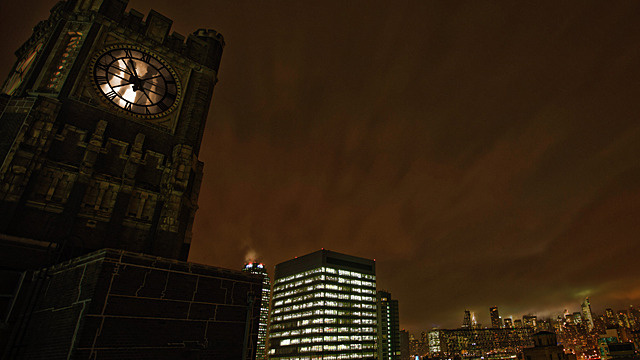 A lot has changed in the year since I graduated. I would never have guessed that I’d become a regular guest critic at my alma mater, listening to students present and defend their thesis projects. Although the process is less stressful sitting on the other side, I still find myself anxious. It’s hard not to see connections between what current students are creating and what other people, including my own peers, have already created. I often feel compelled to say, “Have you seen so-and-so’s work?” But I don’t think that sort of comment is helpful for students whose projects have already reached the finish line. They may feel defeated when hearing that, despite their attempts to create something novel, I see it as something that has been done before.

I’ve become more sensitive to this since reading The Helsinki Bus Station Theory, a credo for creativity that I first heard about at a gallery opening last week, and later through Hyperallergic. The theory comes from a 2004 graduation speech by the Helsinki-born, U.S.-based photographer Arno Rafael Minkkinen, who used Helsinki’s bus routes as a metaphor for pursuing a fulfilling career in the creative arts. His words hit close to home when he describes following a creative direction only to find disappointment when someone says it’s similar to the work of another. One’s first intuition, he says, is to get off the metaphorical bus, find a new route, and start again.

“You spend three years at it and three grand and produce a series of works that illicit the same comment: ‘Haven’t you seen the work of Richard Misrach?’ Or, if they are steamy black and white 8 x 10 camera views of palm trees swaying off a beachfront: ‘Haven’t you seen the work of Sally Mann?’ So once again, you get off the bus, grab the cab, race back and find a new platform. This goes on all of your creative life, always showing new work, always being compared to others.”

Minkkinen does offer hope: buses may go down the same roads but their paths diverge. Some go one way; some go another. And the persistent riders often find that if they stay on their bus, not only do they reach a destination farther than expected, but they can look back on an entire route. By now, Minkkinen has built such a successful career that his early photographs, brushed off by some as being “student work,” are now recognized for their unique vision. And so his advice to future artists? “Stay on the f**king bus.”

I understand exactly where he’s coming from. I almost changed my thesis project at the eleventh hour because I didn’t feel it was original enough, and now I’m glad that I stuck with it. As a guest critic at NYU ITP, I’ve kept my mouth shut about Minkkinen’s speech and focused on giving students constructive feedback. One of those students is Sean McIntyre who I met up with in the Queens clock tower; Sean’s thesis project involves connecting cameras to Locost Queue. I met other creative and talented folks up there, too, including Rafael and Ava of RAVA Films, a production boutique that has worked on some of Art21’s New York Close Up episodes. As all of us stood there watching Jordan’s silhouettes make their final rounds, I realized something major that’s missing from the Helsinki Bus Station Theory: It’s not just about taking a route that you can look back on, it’s also about enjoying the ride in good company.