Edie Fake’s punk ethos of reciprocity and collaboration extends into his work as a comic, tattoo, and performance artist. His arresting graphic work plays with the fluidity and elasticity of images, which sometimes literally interconnect, as in the continuous sidewalk seen in the foreground of his Memory Palaces series. The looping movement in these drawings exhibits an almost cinematic pacing. Below, Fake gives us some background into how his experience working in film impacted him, as well as how his cross country travels in a big, veggie-oil-powered school bus led him, prodigal son style, back to Chicago. I got a bus while I was living in San Francisco. I was tattooing at the time and able to save the money for it. For several years, I had been moving every four months or so. I had deep wanderlust. Finding a rolling home had started to seem like the only solution. I got this amazing bus from this badass, Kevin Sour, who taught me how to drive and take care of it. The bus had a rich history and a really solid veggie oil conversion. From there, I recklessly decided to drive it from the Bay Area to Philadelphia with my friend Heather Ciriza. That ended up being several months of what I would call “clown school”—finagling grease, wrangling the bus down the road, being this large, dirty, weird spectacle. I sort of crash landed in Baltimore after that, until I got the urge to get driving again. I organized a performance tour called Fingers. Edie Fake. “Nightgowns” from the Memory Palaces series, 2012. Gouache and ballpoint pen on paper. 14 x 17 in. Courtesy the artist.

There were nine of us on the bus for Fingers, and although it was crowded, it worked really well. There’s so much to think about when trying to maintain a big vehicle. When I was doing it alone maintenance was all I could think about. But with friends it got so much easier, and I got into making work and performing again. We did a loop around the East Coast and Midwest. On our way to our last show the bus broke down in a big way outside of Louisville. It took a long time for me to give up on fixing the bus. While I was working through it, I moved into Scott Tankersley’s living room closet here in Chicago. The city gave me a really warm welcome. I was able to get a foothold quickly and start scheming again. The bus is now retired on queer land in Tennessee.

Performing and tattooing are both very much a combination of your own energy and other people’s…as is being alive! Acknowledging that is really important for me; it’s part of a multimedia social conversation. I think that staying part of the conversation is staying open to new ideas and methods and letting them adapt your own vocabulary. I’m not sure how else to talk about it except in these vague terms. Sharing what you do, as flexibly as possible, helps other people understand your ideas. Simultaneously, being as flexible as possible toward what other people are sharing with you expands how you understand the world.

I started out working in animation. I was a film major in college and then worked as a negative cutter for about six years. After school I gravitated toward making drawings, collages, and comics because the resources were easier to access, and a lot of the language of film stayed on. My Gaylord Phoenix comics especially developed from thinking about translating animation into static drawing. I almost think about collage like film editing and I almost always see smaller work as part of a larger body, like scenes in a movie. Edie Fake. “Gateway (for Dara Greenwald)” from the Memory Palaces series, 2012. Gouache and ballpoint pen on paper. 14” x 17” in. Courtesy the artist.

Every time I catch one of Alexander Stewart’s and Lilli Carré’s Eyeworks Festivals I am reminded how much animation can accomplish and what a strange experiment it can be. For those reasons, I think a lot about taking up filmmaking again. I feel like I’m in a bit of a cocoon with it though. Rather than jumping into it, I’m waiting for a cohesive project to envelope me. Part of this is because of time constraints—I feel pulled in other directions and I know how much a commitment a film can be. Hopefully, it will become a bigger part of my practice soon. Until then, I’ll just have to let the residue linger on other mediums. 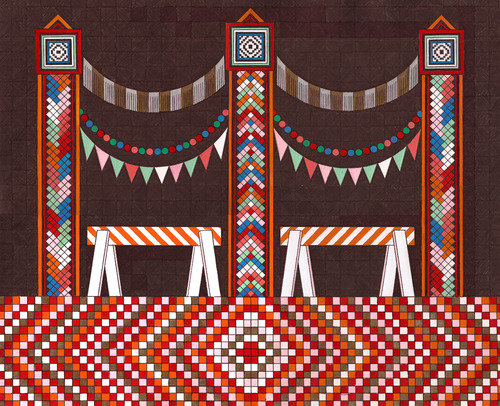 For as long as I’ve been an artist, I have felt part of communities where bartering and collaborating are critical parts of growth. Cross-pollinating is how ideas spread and get expanded upon. Sharing what we can is how we help each other thrive on this messed up planet. It creates networks, emotional bonds, kinship, thought, and physical resources. You can’t always give and you can’t always take. The balance is something I’m always working out.

As told to Thea Liberty Nichols via email in March 2013. Thea is Blogger-in-Residence through May 29, 2013.