In 1958, two years after the death of Jackson Pollock, the artist Allan Kaprow mused about what it means to produce art after the achievements of the late, great Abstract Expressionist. “I am convinced,” Kaprow wrote in his famous essay The Legacy of Jackson Pollock, “that to grasp a Pollock’s impact properly, we must be acrobats, constantly shuttling between identification with the hands and body that flung the paint.”[1] He continues: “This instability [of identification] is indeed far from the idea of a “complete” painting. The artist, the spectator, and the outer world are much too interchangeably involved here.”[2] Kaprow absorbed lessons from Pollock about the expansive possibilities of art making, seeing how as Pollock rhythmically moved around his canvases laid on the floor flinging and pouring paint the act can become equal to or even greater than the product. Kaprow would incorporate this new sensibility into his Happenings: short-lived performance pieces beginning in the late 1950s in which the artist and the audience became the artistic medium in partly staged, partly improvisational actions.

By the mid-1960s, at a time when the previous generation’s abstract ideas were increasingly out of fashion, artists were pushing the artistic envelope with radically new materials, approaches and processes. Richard Serra, a young, relatively unknown artist at the time, began to create works from unconventional materials that emphasized gravity and process. Serra, who would become best known for his colossal steel sculptures, began his career making less monumental, though no less significant, process-oriented works. An important new exhibition, Richard Serra: Early Works, at David Zwirner Gallery in New York, brings together an impressive selection of the artist’s work from 1966 to 1971, showcasing Serra’s early explorations with industrial materials and chronicling his interest in how action can become form. 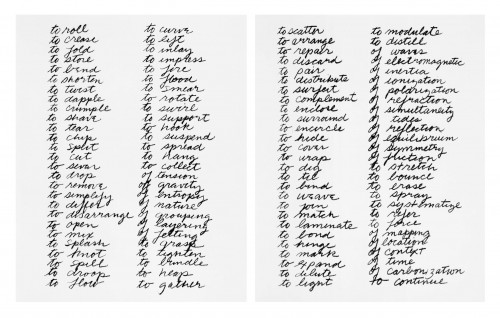 An iconic work from this time period on view at Zwirner is Serra’s Verb List (1967), in which the artist cataloged the infinitives of 84 verbs: to roll, to crease, to fold, to lift, to gather, etc. A register of potential artistic activity, Verb List became something of an instruction manual for Serra’s early art making, as demonstrated by his To Lift, an elegant work consisting of a rectangular piece of vulcanized rubber that Serra sourced from a warehouse. For To Lift, Serra lifted the thick rubber slab from one side, gathering the material into a conical shape like pinched fabric. The result is a freestanding sculptural form that is the concise summary of its titular act: a result from the process and activity of lifting. Although a disarmingly simple work, To Lift is a compendium of 1960s art concerns: it streamlines the role and definition of the artist; it elevates the idea and artistic act onto equal footing with the end result, and the work’s potential for collapse introduces gravity and instability into the visual and conceptual core of the work. With To Lift, the gap between how art appears and how it was made, which by 1967 was already rapidly shrinking, got a bit smaller.

The back room of the Zwirner exhibition contains Serra’s Prop pieces, thick sheets of commercial steel that are at times balanced using only the force of counterweight and gravity. In One Ton Prop (House of Cards), for example, four plates of lead antimony precariously lean against one another, held in place only by their own weight. These important Prop pieces expand on the inherent possibilities contained in the verb “to prop,” and draw on the artist’s previous experiences working at steel mills and shipyards.[3]

Kaprow concluded his 1958 text on Pollock’s legacy with the following thought:

“Young artists of today need no longer say ‘I am a painter’ or ‘a poet’ or ‘a dancer.’ They are simply ‘artists.” They will discover out of ordinary things the meaning of ordinariness. They will not try to make them extraordinary but will only state their real meaning. But out of nothing they will devise the extraordinary and then maybe nothingness as well. People will be delighted or horrified, critics will be confused or amused, but these, I am certain, will be the alchemies of the 1960s.”[4]

As Kaprow predicted, the 1960s was a time for taking risks and courageously striking out. Richard Serra: Early Work summons forth this scrappier time when experimentation was the word of the day and anything seemed possible, when artists gave up much of the heroic and deeply personal spaces of modernist art and pursued a new sense of artistic selfhood by embracing more detached analytical and industrial concerns. The exhibition teems with many of the bold ideas and pathways that have come to define this period in art, and showcases one of the most important artistic voices of his generation. It is not to be missed.

[3] William Anastasi is also an important artistic precedent for Serra’s prop pieces, having produced a sculpture of balanced freestanding forms in 1965.