As an art historian with limited financial means, my interest in art fairs is minimal. Although I enjoy seeing the variety of works on display, I find the experience of navigating through the tortuous arrangements of gallery booths and the throngs of collectors, curators, and dealers that frequent such events slightly overwhelming. This year was my second time at Art Basel, the preeminent art fair founded by Basel gallerists Ernst Beyeler, Trudi Bruckner, and Balz Hilt in 1970. While the main fair grounds had a number of salient works on view, such as Robert Heinecken’s Surrealism on TV (1986), a triptych of 35mm slide projections of stills lifted from late-night television programs, I spent most of my time in the side attractions: Art Unlimited, Art Parcours, and the numerous shows in the kunsthauses and kunsthalles of the surrounding area.

Inaugurated in 2000, the Art Unlimited platform is an open-plan exhibition dedicated to large-scale contemporary artworks, such as grand sculptures, experiential rooms, and installations of moving images, which, due to their size, cannot be showcased in the main exhibition hall. Organized by Gianni Jetzer, who replaced Simon Lamunière as curator of Art Unlimited in 2012, the show typically features a selected group of galleries (approximately half of the more than 300 included in the principal space) that each exhibit works by one artist. Unlike most curators, Jetzer does not select the works himself, but rather serves as liaison between the galleries and the fair organizers, and also adroitly positions the works in the large warehouse space off Messeplatz. 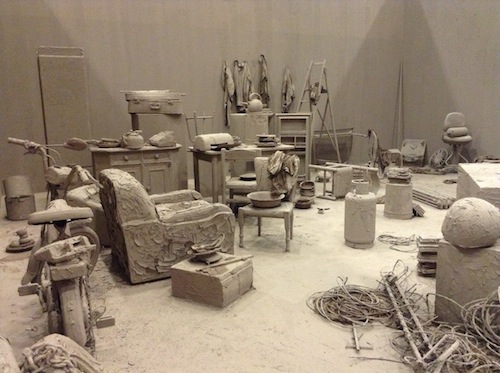 This year’s presentation was, true to its nature, full of the spectacle-driven works that have proliferated since the 1990s, namely immersive and black box environments. Marlborough gallery, for instance, offered up Artichoke Underground (2013), a maze-like spatial collage by Jonah Freeman and Justin Lowe, which encouraged visitors to pass through a disorienting series of what looked like intricately assembled film sets for an imaginative dystopic picture. Galleria Continua also had on display a bleak post-apocalyptic habitat. The last work in a stunning series Chinese artist Chen Zhen made before his death in 2000, Purification Room consists of domestic objects entirely covered in earth, a naturally generated material he thought was capable of cleansing the world. Zhen described it as an “archeology of the future.”

Other pieces included in Art Unlimited were remnants of, or sequels to commissions featured in Carolyn Christov-Bakargiev’s socially conscious and historically provoking dOCUMENTA (13) of last summer. Kader Attia’s The Repair (2012), a double-screen video projection of disfigured WWI soldiers juxtaposed with scarified African tribe members; Walid Raad’s Views from Outer to Inner Compartments (2010/11), architectural mockups of museum interiors—a comment on the drastic growth of infrastructures devoted to the arts in the Middle East; and Pierre Huyghe’s Untiled Film (2012), a haunting documentation of his installation in Kassel’s Karlsaue park of a Maillol-esque supine nude with a beehive for a head, are just three examples.

With works by minimalist sculptor Carl Andre, performance pioneer Gina Pane, and arte povera innovator Mario Merz prominently displayed, another strong theme was veterans of the 1960s—the decade that continues to unequivocally inflect contemporary art practice. Upon walking into Art Unlimited, in fact, a supersized, 23-foot tall perversion of Brazilian artist Lygia Clark’s Bichos (Creatures) welcomed visitors. Originally made between the years 1960 and 1964, these modestly-sized hinged-aluminum sculptures were meant to be physically manipulated, animated and transformed by the everyday person. According to a representative of Alison Jacques Gallery, it was Clark’s intention to one day realize them on a monumental scale; but, of course, at this monstrous height, the sculpture’s once participatory social purpose is negated. Between the prevalence of dOCUMENTA (13) artists and the inclusion of other politically engaged artists, such as Johan Grimonprez, Theaster Gates, and Alfredo Jaar, it’s perhaps not surprising that numerous people (reviewers included) lauded the display for its “response to a decade of global conflict.” And yet, in this mecca of the 1 percent any radical, subversive, or activist intention was completely lost. It’s no wonder that on June 14, with civil war raging in Syria and anti-government protests continuing in Turkey, approximately 150 people peacefully occupied Japanese artist Tadashi Kawamata’s tactless Favela Café (2013), a fully working watering hole and eatery erected outside the fair in the guise of Brazil’s slum settlements. What followed, a brute display of force by Basel police, who shot rubber bullets and tear-gas at the gatherers, was obscene and entirely gratuitous. A little less than a mile away, the fair continued with Art Parcours, an offshoot launched in 2010 with the idea of expanding the fair beyond its confines on Messeplatz to Basel’s historical neighborhoods, where site-specific installations are presented in both art and non-art spaces. Highlights there included Danh Vo’s Gustav Wing (2013), bronze casts of fragmented body parts and musical instruments chain-linked from the wooden-beamed roof of a former convent; and Lisa Oppenheim’s Smoke (2013), a two-screen video installation of solarized shots of smoke on view in a spacious dark attic previously used as a barrack in the late nineteenth-century. But the actual showstoppers of my Swiss tour were three monographic exhibitions by artists who work primarily in the mediums of video and film. British artist Steve McQueen’s exceptional output of time-based works, which have addressed difficult, gritty subjects, such as the inhumane working conditions in South African mines as well as the surveillance and persecution of African-American activist Paul Robeson, is installed to perfection at the Schaulager, a privately-owned museum that transformed two floors of its Herzog and de Meuron building into a “custom-built City of Cinemas.” Meanwhile, at the Kunsthalle Basel, thirteen lo-fi collaged video works spanning the 40-year career of French experimental filmmaker Michel Auder were on display. Informed by the events of May ‘68 and the innovations of the French New Wave, Auder, who describes himself as an “untrained anthropologist,” has repeatedly fixed his camera, sometimes for days at a time, on unsuspecting people and his immediate environment to create an idiosyncratic document of everyday life. The last show I saw before boarding a plane back to muggy New York was a focused survey dedicated to American artist Ericka Beckman at Kunsthalle Bern. Having seen little by Beckman beforehand, I was smittened by her brilliantly colored, game and fairy-tale inspired multimedia exhibition. Of the same generation as Auder, Beckman was part of the No Wave underground scene in New York in the late 1970s and ‘80s, and so much of her work is an amazing confluence of performance art, super-8 film, and experimental audio compositions. In her 30-minute 16mm musical Cinderella (1986), Beckman transforms the classic Disney story into a sinister computer game of sorts to address societal pressures, such as female socialization. With a guest appearance by Mike Kelley as an eccentric and slightly deranged-looking accordion player, the film, like much of her oeuvre, is at once mesmerizing and unsettling.