Editor’s note: This essay was originally published by CUE Art Foundation as part of their Young Art Critic Mentoring Program, in partnership with AICA-USA. The author’s mentor was David Ebony, currently a Contributing Editor of Art in America and its former Managing Editor. The Art21 Magazine has republished this essay as part of our new collaboration with CUE Art Foundation. Walking through one of Graem Whyte’s exhibitions is an adventure. On the walls might hang an assortment of curious objects that seem to resemble misshapen billiard sticks or wobbly tennis rackets. They may appear alongside of ping-pong tables that are so drastically reconfigured as to suggest entirely new gaming equipment. There might be musical instruments that seem to belong to Dr. Seuss’s world. Occasionally, Whyte even includes space-age pods into which you might climb for a few magical moments. Whyte’s work may seem humorous, but at its core is a deeply social understanding of play. With his performative sculptures, Whyte establishes environments that bring together spectators as participants in a shared social field. He does this to forge new communities that seek not a better future, but a better present achieved through the careful cultivation of social relationships.

Take, for example, a group of divining rods entitled In Search of Water (2013). Displayed on a wooden wall rack, three linear forms hang horizontally. They include a double blade paddle made of rackets from racketball; a twisted and burnt vinyl rain gutter that resembles a cast-off from a John Chamberlain sculpture; and a giant wishbone made of polished maple, the joint of which terminates in a larger-than-life-sized human tongue rendered in bronze. The works imitate divining rods, but their ridiculous forms seem to imply that they are unable to divine anything useful. Viewers might imagine a comical scenario in which wielders of these functionless sticks wander without purpose. (Whyte has even considered allowing visitors to handle these objects in the gallery, though so far, they have not been shown with this option.) Whyte’s work confuses the object of the game. Here, the act of seeking water or other resources is thwarted by the absurdity of the objects. By removing clear strategic objects of a game, Whyte swerves away from the notion of winning or losing and instead emphasizes the interaction of players. In works like In Search of Water, Whyte invokes what Nicolas Bourriaud and other critics refer to as “relational aesthetics.”1 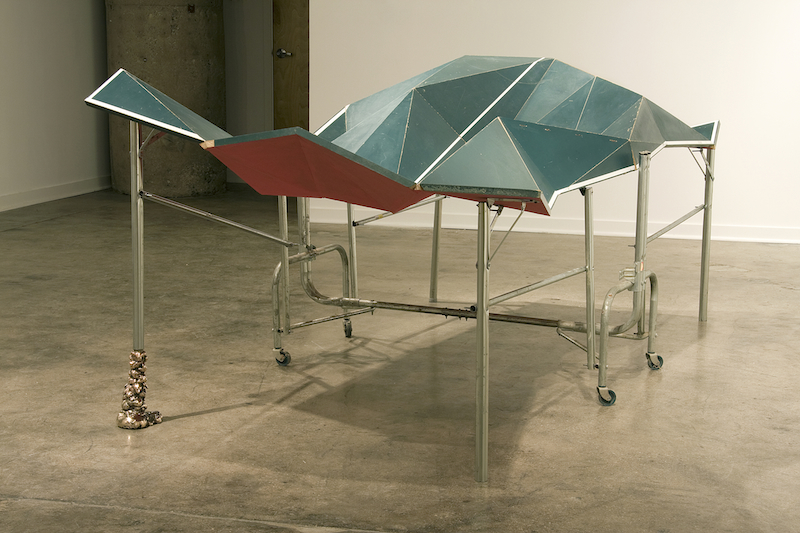 Whyte is heir to a generation of relational artists that includes Rirkrit Tiravanija, Gabriel Orozco, and Felix Gonzalez-Torres—artists whose work advances sociological relationships as its principal aesthetic concern. Devoted to the social, Whyte nevertheless admits the challenges and obstacles that befall relationships, as he incorporates these twists and kinks into the form of the work. For two works seemingly in conversation with Gabriel Orozco, Whyte constructs fantastic permutations of ping-pong tables. In Venue for Advanced Conflict Resolution (2011), Whyte alters a ping-pong table by fracturing the flat plane into an irregular topography of contiguous facets. The asymmetrical structure renders a table tennis match—here, a stand-in for conflict—virtually impossible, since contact with any of the planes would send the ball whirling off in unpredictable, unmanageable directions. Conflict is prevented by changing the conditions on the field: both offensive and defensive moves are subverted by the field, and instead the competitors are united in a comically hopeless situation. The battlefield is again altered in Make Love, Not War (2012), another table tennis construction. This time, Whyte encloses the area of play by wrapping the table around it. Whyte builds an octagonal channel through which agents may play. This work, too, relies on humor, as the pink tubular sculpture, which resembles the birth canal, transforms antagonistic competition into a sexually suggestive game of cooperation. Constructing a real social sphere—a relational sphere in which live agents interact—constitutes a critical aspect of Whyte’s artistic practice. Each of these two sculptures enacts what Bourriaud identifies in relational art as a shift away from modernism’s tenets toward the desire to build “concrete spaces.” Among the effects, this shift instigates a return of disembodied vision (key for modernists like Clement Greenberg) to the body as a carnal site for sensation. The “preference for contact and tactility” that Bourriaud observes in relational art is manifested explicitly in these two works. Their materiality renders the spectator an embodied social agent who experiences concrete sociological exchange in a tangible environment. To develop these sociological environments, both Bourriaud and Whyte refer to the “field,” a concept developed by sociologist Pierre Bourdieu. For Bourdieu, the field contains the area in which agents assume social positions in relation to one another. Whyte occasionally investigates the concept of the field literally, as in his 2010 collaborative work Memory Field, created with his wife, artist Faina Lerman. Memory Field features three concentric ripples made in a grassy field, designed to channel rainwater to an underground cistern that feeds a local community garden. The piece delineates a literal field for sports and social interaction. But the ripple elliptically refers also to the community gathered around the garden. Whyte returns to the idea of the field in his 2013 work, Laying it All Out, a mechanical device capable of inscribing a spray paint circle of up to eighteen feet in radius. The device includes a spike (the compass center) which, when driven into earth, allows the trammel arm to rotate, delineating literal spheres of relations. But relational aesthetics involves more than geography; it equally requires action by social agents. That action is always conditioned by an agent’s experience. The field, therefore, works in tandem with another crucial tenet of Bourdieu’s philosophy—the habitus. Though Bourriaud never mentions it, the habitus haunts relational art. The habitus is a dynamic system that relies on established dispositions while simultaneously defining the conditions for potential response.2 Whyte brings attention to the habitus by requiring social reaction from his viewers. In some cases, Whyte tests the habitus by calling on his constituents and awaiting their reply. Wishing for Mountains (Supper’s Ready) (2013), for instance, is Whyte’s approximation of an alpine horn. He crafted the functioning instrument to be used to call to meetings residents of the Detroit artists community in which he lives. In other cases, Whyte cultivates an embodied response that more closely resembles the kinesthetic sociology practiced by Loïc Wacquant. Wacquant studied prizefighting by joining, training, and competing in a black urban boxing gym in Chicago. He recognized that by embedding himself in the sporting community, he was able to achieve a “deep immersion in, and carnal entanglement with” his sociological object. In Squash House, to be completed in late 2014, Whyte will offer a similar experience to art goers. Graem Whyte. Squash House, the conversion of 13133 Klinger Street in Detroit into a squash court and community squash garden, work in progress. Courtesy the artist.

Working with the non-profit organization known as Power House Productions, Whyte is in the process of converting a dilapidated Detroit house  into a usable squash court. The house, bought at auction, has been gutted and will be outfitted with a squash court, an area for spectators, and a greenhouse. As a pun on the house’s name, Whyte intends to grow squash in the greenhouse and its outside gardens. (Squash appears frequently as a crop in many backyards in the surrounding Bengali neighborhood.) Squash House invokes the habitus on multiple levels. Sport itself relies on skill developed by past practice. But this house will also function as a community hub and recreation center, so established social habit will routinely come into play. Importantly, the social activities here—athletics and gardening—are highly physical activities. Whether participating in a game or working in the greenhouse, art goers necessarily interact with one another on a physical level. Visitors to Squash House thus experience what Wacquant calls the “potency of carnal knowledge” since these artworks insist on real-time, embodied exchange, not only the representation of such. Whyte’s use of play is powerful not only because it is engaging, but because it returns the viewer to an embodied sense of the sociological so often missing in contemporary discourse. His work offers us the chance to investigate “carnal knowledge” by sharing directly in corporeal sociological transaction. Whyte’s interactive sculpture offers a compelling venue in which social interactions are initiated, tested, and revised. Moreover, his work is optimistic. By calling attention to our habituated responses while simultaneously returning our sensibilities to the body, Whyte insists on our inherent agency and ability to build better relationships through aesthetic means.

Graem Whyte: Resystemize is on view at CUE Art Foundation. The show will close with an artist talk on April 19.

1. See Nicolas Bourriaud, Relational Aesthetics (Dijon, France: Les presses du reel, 2002).
2. Bourdieu’s protégé, Sociologist Loïc Wacquant, puts it this way: “the notion of the habitus proposes that human agents are historical animals who carry within their bodies acquired sensibilities and categories that are the sedimented products of their past social experiences…” See Loïc Wacquant, “Habitus as Topic and Tool: Reflections on Becoming a Prizefighter,” Qualitative Research in Psychology 8 (2011), 82.

Contributor
John Corso is a Detroit-based art critic and an assistant professor of art history at Oakland University in Rochester, Michigan. Corso has written art criticism for Art Papers, The Huffington Post, and most recently, Art in America. He is currently drafting a manuscript on the American sculptor Sheila Pepe.
Go to articles