The mural is perhaps the original site-specific art form. In Los Angeles, a sprawling and complex city with a number of distinctive neighborhoods, the murals tend to be richly evocative of place. Take a drive through East LA, and you will know without a doubt you are there when you see colorful Chicano narratives festooning many of the public walls. Thick with images of community history and pride, these murals are largely the legacy of the 1960s and ’70s Chicano rights movement, when Latin Americans in the United States began to radicalize and organize. The public mural, an “art of the people” developed and executed in close collaboration with community members, was an essential part of their agenda.

A stroll through Venice Beach is also marked by the appearance of many unique images painted on walls, perhaps a bit more whimsical than those in East LA. One of the more famous is Rip Cronk’s Venice Reconstituted (1989), a Southern Californian reimagining of Botticelli’s Birth of Venus. Here, Venus is portrayed as a roller-skating young woman with long, cascading blond hair, gliding down the Venice boardwalk. A cartoonish thought bubble next to her head reads, “History is myth.” This philosophy is solidly rooted in Venice’s postwar bohemian culture, which flourished when the area fell into decay and provided artists with a cheap, funky environment in which to live and work. Venice’s dreamily individualistic ethos is a world away from the social realism of East LA, a distance perhaps marked by the traffic-choked 10 Freeway that stretches between these neighborhoods. The origins of American mural practice can be traced back to the great artists of the Mexican Revolution—José Clemente Orozco, Diego Rivera, and David Alfaro Siqueiros—who introduced the art form to the United States and inspired President Franklin Roosevelt to commission two thousand five hundred murals throughout the country under the Works Progress Administration.1 As a revolutionary tool, the mural’s primary goals were to hold a mirror up to a young society and help its citizens to identify and affirm their shared histories, experiences, values, and aspirations. This idealistic legacy can be seen in places like Venice and East LA, where murals have gone a long way toward shaping and defining the character of these communities.

It was therefore quite an anomaly when, as part of the 1984 Olympic Arts Festival, the city of Los Angeles was presented with ten freeway murals. Meant to mark the path to the games, these eclectic murals were conceived by a diverse group of artists (Glenna Avila, Judith Baca, Alonzo Davis, Willie Herrón III, Frank Romero, Terry Schoonhoven, Roderick Sykes, Kent Twitchell, John Werle, and Richard Wyatt) and painted on the walls of the downtown freeways. Hazardous to create, difficult to maintain, and easy to miss by motorists focused on the road, the murals were met with skepticism by some, including Baca, a highly respected Chicana muralist and community leader, who said that the freeways were a “no man’s land” where murals would not be appreciated or protected.2

Robert Fitzpatrick—the festival director who was ultimately responsible for pushing the mural commissions through—had a different vision of the murals. He saw the freeways as the “connective tissue” of Los Angeles, with the murals speaking to its residents’ collective “longing and loneliness.”3 Interestingly, his poetic musings recalled well-known literary passages reflecting on the romantic yet solitary experience of LA’s freeways. In a 1976 essay called “Bureaucrats,” a study of an early failed attempt at a carpool/express lane on the 10 Freeway, Joan Didion noted the absolute concentration required for successful freeway navigation and called the experience “the only secular communion Los Angeles has.”4 This echoed Reyner Banham’s enthusiastic meditation on the efficiency of the system, which he labeled Autopia, one of the categories identified in his landmark 1971 book, Los Angeles: The Architecture of Four Ecologies. Banham admired the way “the Los Angeles freeways become a special way of being alive.”5 A decade later, Bret Easton Ellis would famously begin his first novel, Less Than Zero, with the sentence, “People are afraid to merge on freeways in Los Angeles.”6 He went on to use the phrase throughout the book as a metaphor for the dislocation felt by the city’s jaded and overprivileged youth.

For Angelenos, the freeways represent a strangely disembodied common space. The vast majority of the population spends a significant amount of time on them daily, and yet for the most part, each driver is alone. Both public and private, both participatory and solitary, the freeway experience can evoke a heightened sense of awareness, an exhilarating freedom, and an existential confusion all at once. In such a liminal arena as the freeway, what role can murals play? The ten Olympic murals (of which only seven are still extant)7, represent a range of subject matters and viewpoints. Overall, they seem to suggest a sense of openness and possibility.

Baca, who initially resisted the freeway murals, came around when she saw their potential of recognizing the achievements of women athletes.8 Her resulting mural, Hitting the Wall, is a dramatic depiction of a woman crossing a finishing line, suggesting the breaking of social barriers. It continues Baca’s mission of promoting the visibility of marginalized peoples while also making dynamic use of an awkward space, located at a curving off-ramp of the 110 Freeway. John Wehrle’s Galileo, Jupiter, Apollo and Glenna Avila’s L.A. Freeway Kids are two of the more visible works on the 101 corridor. Wehrle’s outer-space fantasy landscape depicts fragments of Greek and Roman architecture hurtling past planets, evoking a surreal collision of past and future. In Avila’s piece, a carefree group of children, all modeled on the artist’s acquaintances, play with abandon, their oversized figures commanding a wall that had been adjacent to the now-closed Children’s Museum of Los Angeles.

Kent Twitchell’s set of two murals, which face one another at an overpass on the 101, perhaps best speak to the sensibility at work. In Jim Morphesis Monument and Lita Albuquerque Monument, two LA artists and friends of Twitchell are seen in close-up, their faces earnestly looking out while their open palms frame their heads. Twitchell notes that a variety of interpretations are possible here.

“I had seen a photo in Life or Look of Picasso when I was a boy. He was looking through a window, I think, and it always stuck with me. Also, there was much concern about terrorism at the ’84 Olympics, as had happened previously. A Native American symbol for “no weapons” was to raise their hands, to show they came in peace. The pose also [evokes what artists often do], looking through their hands, framing a composition to visualize an idea. Also, an [artist’s work involves] mind and hands, concept and manifestation. [The figures in the murals are] looking through the concrete out into the world.”9 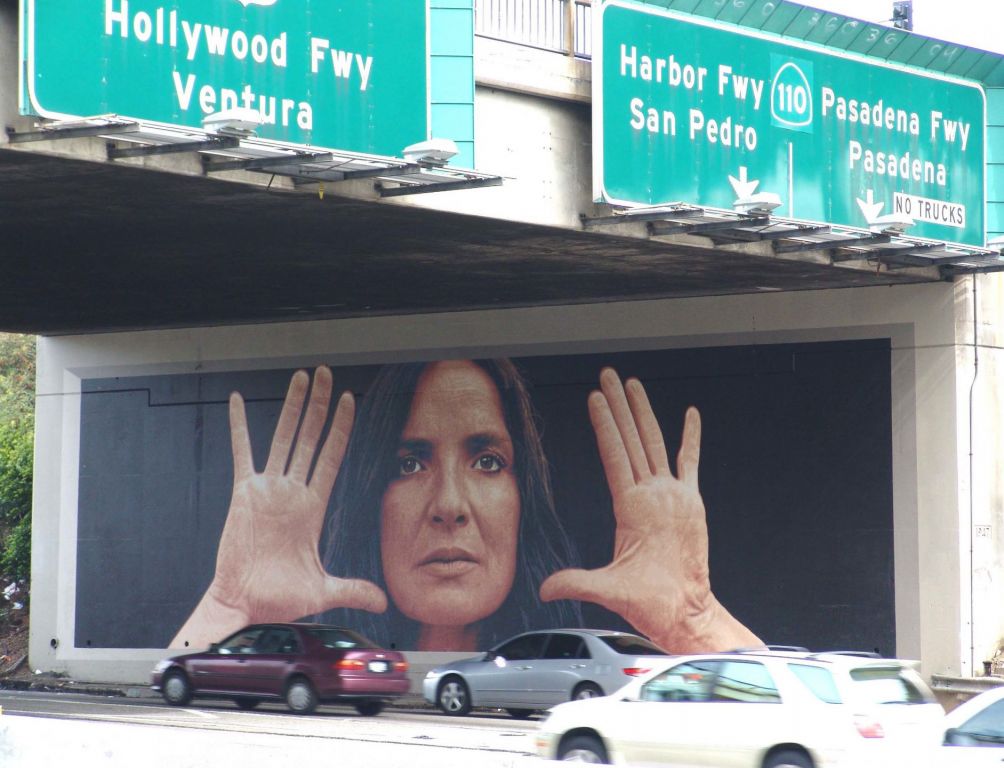 When asked about the significance of these historic freeway murals, Lita Albuquerque, also a noted public artist, perhaps best summed up their spirit.

“Our ideas of public and community have changed. We are no longer isolated neighborhoods separated by distance. Instead, people are linked via a variety of systems, images, and information. The Olympic Freeway Murals belong to everyone. Their expression belongs to the entire city. By [being placed] on the freeways, on the circulatory system of the city, its lifeblood and its pulse, the murals become part of that system and link all our communities together.”10