Artists are often cast as victims or the cause of rent increases in blighted urban neighborhoods. Can artists not be a stabilizing force, too, a presence that helps a neighborhood thrive while remaining affordable? From Omaha to New York City, I have seen examples of artist-entrepreneurs and arts advocates who have started their own businesses in areas vulnerable to gentrification—not in an effort to change the existing landscapes, but to preserve a culture. 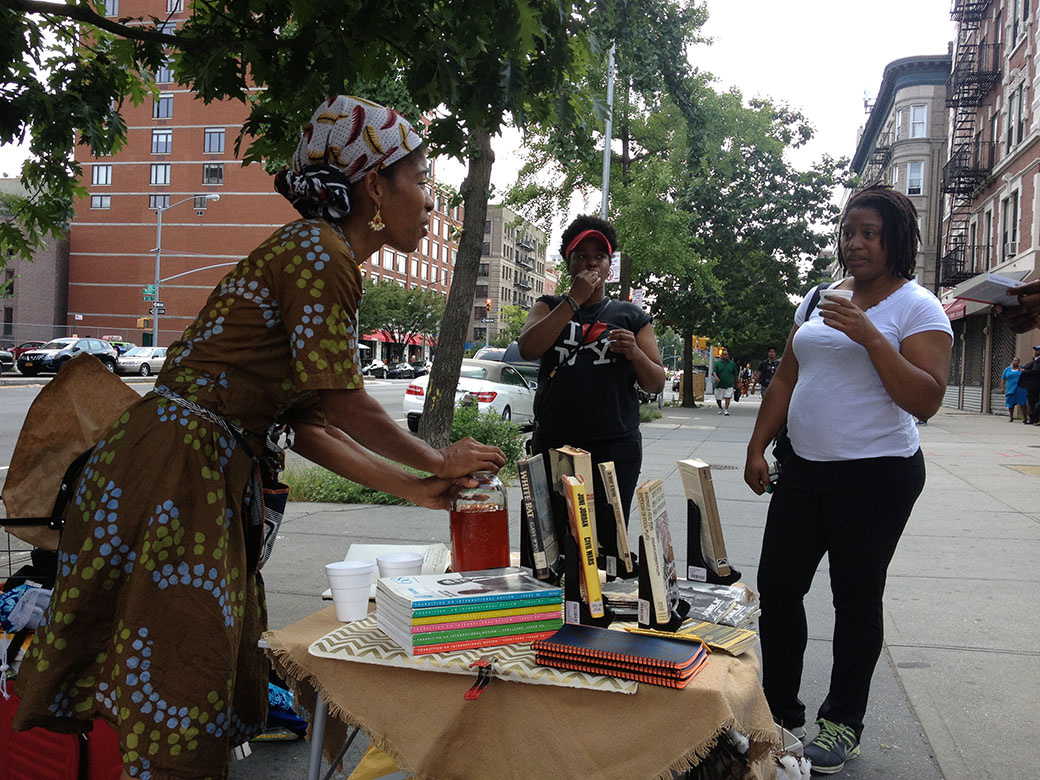 NEW YORK, NEW YORK
Harlem residents are no strangers to sidewalk vendors. Each block of the neighborhood’s main artery—125th Street—offers tables upon tables of incense, body oils, mixtapes, DVDs, hats, belts, and apparel. On Malcolm X Boulevard between 130th and 131st streets, across from a fenced-in vacant plot of land, award-winning writer Sharifa Rhodes-Pitts has positioned her new enterprise Blacknuss Books. Blacknuss is a pop-up bookstore that features merchandise rarely found on Harlem’s sidewalks: handmade zines, tote bags, old books, and other relics promoting Black culture. The merchandise rests on a portable table (dried cotton branches peek out from below it) and decorative book bins demarcate the shop’s boundaries. Customers are welcome to sit on foldable stools for conversation and a cup of tea.

Rhodes-Pitts plans to eventually open a brick-and-mortar space in Harlem, where she lives. Setting up on the sidewalk is part of her “market research”—she’s getting to know her potential clients and they are getting to know her. Blacknuss is not just a business but also a community and cultural center, a place where people can rest, engage in meaningful dialogue, and buy local. Its current incarnation offers the neighborhood a glance at its past, and its future—and affirms that its Black culture still matters. The space that she has chosen for Blacknuss Books is intentional; it’s located near the now closed Liberation Books (1967–2007), a revolutionary bookstore that promoted Black Power and served as a meeting place for civil rights and social justice activists. The space that was Liberation is now a wine and tapas bar. Creating a self-sustaining business and opportunities for writers and neighbors to support themselves are among Rhodes-Pitts’s goals. Ultimately, she wants Blacknuss to be a worker-owned store, democratic in its day-to-day functions. Though artist-run cooperatives are important, valuable even, they do not equal neighborhood sustainability. That requires land and building ownership paired with a commitment to cultural preservation. Rhodes-Pitts has not expressed interest in buying property to house her bookstore, but there are artists and community organizers in New York who have embarked on this journey, organizing the city’s second community land trust. These communally run nonprofit corporations remove land from the speculative market to provide residents with permanent affordable housing, as well as civic and commercial spaces. The Cooper Square Community Land Trust, located in Manhattan’s Lower East Side, is the City’s first. Its buildings include storefront spaces that can be rented at below-market rates, helping small businesses like Blacknuss to open and remain viable. OMAHA, NEBRASKA
Meanwhile, in North Omaha, the streets are fairly quiet, with many plots of barren land and vacant storefronts lining Twenty-Fourth Street, a main thoroughfare. Landmarks like The Omaha Star, established in 1938, and Skeets Ribs & Chicken, which has been around since the 1950s, are still there. On a side street, executive director Brigitte McQueen Shew runs The Union for Contemporary Art. Housed in a former food pantry, the Union provides studio space for Nebraska-based artists. “I have been working closely with members of the community to develop a nonprofit, which will not only support the artists and arts community of Omaha,” Shew has said, “but will utilize the arts as a means to foster greater civic engagement throughout our city.” 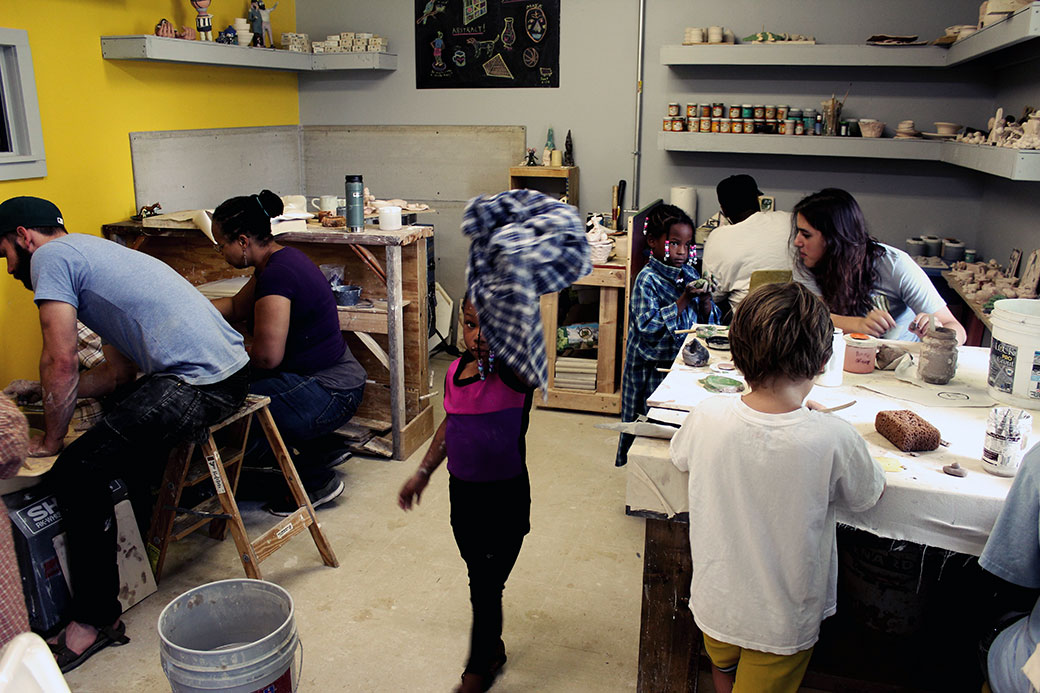 Handbuilding, glazing, and throwing on the wheel in The Union ceramics studio, Omaha, Nebraska. Courtesy The Union for Contemporary Art.

At the Union, Nebraskans can also take art classes, borrow power tools from the lending library (the city’s first), and harvest crops and take them home for free. Artists at any stage of their careers also have access to the organization’s cooperative workspace, which includes a darkroom, print studio, woodshop, and ceramic studio. Shew’s space has all the makings of a successful social enterprise. Her commitment to the revitalization of North Omaha, a predominantly African American neighborhood that once boasted a robust jazz scene, is apparent in her vision: to nurture Omaha’s artistic talent, while cultivating appreciation for the arts and creating spaces of inclusivity. Just down the road is Carver Bank, the brainchild of Chicago-based artist and urban planner Theaster Gates and his organization, Rebuild Foundation. The building, which first opened as the Carver Savings and Loan Association in 1944, now offers studio and gallery space to area artists and a backyard garden for public programming. A sandwich shop run by neighborhood mainstay Big Mama’s Kitchen is attached to the space. Carver Bank was developed with support from the Bemis Center for Contemporary Arts to provide Omaha-based artists with more resources and to become a creative hub for North Omaha. As with all of its Midwest projects, Rebuild Foundation is committed to revitalizing North Omaha by creating a space where neighbors can meet, art can be experienced, and creative entrepreneurship cultivated. In the spirit of art-based community-development projects like Project Row Houses, Theaster Gates offers a compelling model for creating a thriving neighborhood: invest in local business, provide artists with resources, and offer residents a place to connect.

Cultural preservation, community-owned land, and economic opportunity are key ingredients for sustainable, resilient neighborhoods. The artists and art advocates at the helm of Blacknuss, the Union, and Carver offer exciting possibilities for building them. Underlying all of their initiatives is a desire to build a web of support—greater interconnectedness among people who are already neighbors.

Contributor
Petrushka Bazin Larsen is an independent curator and the Program Director at The Laundromat Project. She lives with her husband and toddler in Harlem, her home for the last ten years.
Go to articles