Rooms With A View 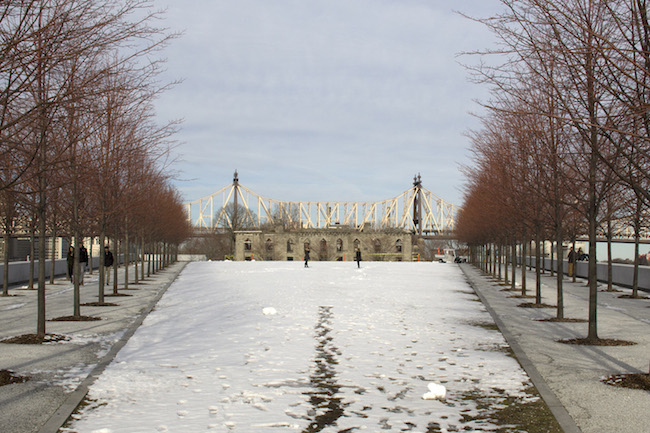 “Treat your body like it belongs to someone you love.” I spied this sentence in a health-food store recently. My thoughts wandered to catchphrases spouted in yoga classes, talking about the body as temple. Such notions admittedly feel lofty for my current daily experience in New York City. These days, it’s more like I’m running to grab an egg on a roll from the corner bodega, and I won’t admit how long it has been since I’ve been to a yoga class. During these cold winter months, my body feels more like a railroad apartment in need of more windows.

This notion, of the body as a structure, sticks with me. Each body is like an intricate complex of rooms, storing the physical and emotional weight of individual experience. Buildings passively do the same, and we preserve ruins to pay homage to their history. Perhaps the most important distinction is our human ability—and need—to filter these events as they pass through our doors.

ROOM ONE: THE RUINS Roosevelt Island sits quietly between Manhattan and Queens, a two-mile stretch in the middle of the East River. Abandoned and functioning hospital structures intermingle with high-rise apartment buildings and riverside walks while an aerial tram running between the island and Manhattan promotes the island as a tourist attraction. It is an eerie place, at turns calming and unsettling.

Near the island’s southern end are the remains of an old smallpox hospital, where patients were quarantined in the 1800s. In 1975, the neo-Gothic ruins were designated a historical landmark. The site provides a unique opportunity to consider both the history of the structure and the island’s physical orientation to Manhattan, echoing the presence of other misfortunes tucked away on this small island.

In 1994, the composer and choreographer Meredith Monk created American Archeology No. 1: Roosevelt Island, a site-specific performance for the island. In this outdoor production that integrated choral music and choreographed sequences, Monk’s performers (including extras who lived and worked on the island) re-enacted elements of the island’s layered past. In an interview about the piece, Monk spoke of our cultural preoccupation with the future and the importance of embracing such events for a less fragmented, less violent contemporary reality. As she says, we are “a young country still learning to carry the weight of history on our backs.” Zero Tolerance, an exhibition currently on display at MoMA PS1, addresses this role of the artist, as society’s embodier on a global scale. Many of the works in the show reference political demonstrations and public actions in response to concerns that are specific to a certain place and time. In some cases, the artist creates a response where the body becomes the filter for these events, as in the piece East Side Story (2006-8), by the Croatian artist Igor Grubic.

East Side Story is composed of two video projections, side by side. One shows documentary footage from two gay-pride parades that took place in Belgrade, Serbia, and Zagreb (in Grubic’s native Croatia), revealing extensive abuse endured by parade participants at the hands of a hostile crowd of observers. In the other video, Grubic filmed four dancers as they re-enacted selected movements and gestures extracted from documentary footage of the original parades and then presented them in choreographed sequences along the original parade routes.

The body serves as a powerful force in filtering the events we witness, especially those we do not know how to process. Performance artists, using their bodies as a means of public action and physical response, play a vulnerable and courageous role toward this purpose. They embrace and filter difficult experiences into compelling works that bring a sense of recovery with a new dimension of understanding. The PS1 exhibition was dominated by videos from all over the world, showing emotionally challenging footage of real or re-enacted events and protests. Most of these events had violent roots. Igor Grubic’s piece served as a grounding point, as his dancers distilled one such event into a collection of extended, symbolic gestures. As I watched them repeat the slowed, isolated movements, my empathy took the place of my shock, and I was mesmerized. The dancers’ motions felt like grooves being worn into material, their gestures embedded into my memory. 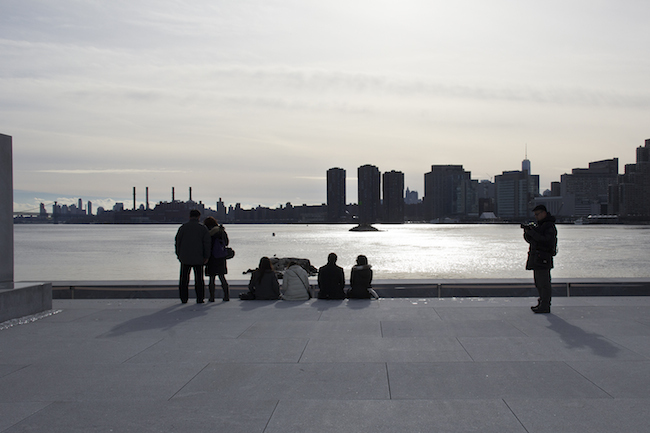 A monument to Franklin D. Roosevelt was recently completed on the southern tip of Roosevelt Island, renamed in 1973 for the former president. The monument, designed by the renowned architect Louis Kahn, is adjacent to the ruins of the smallpox hospital; it is framed by the ruins to the north and by an expansive view of the East River to the south. As part of a legendary lecture given at Pratt Institute the same year the island was renamed for FDR, Kahn described the concept of his design:

I had this thought that a memorial should be a room and a garden. That’s all I had. Why did I want a room and a garden? I just chose it to be the point of departure. The garden is somehow a personal nature, a personal kind of control of nature. And the room was the beginning of architecture. I had this sense, you see, and the room wasn’t just architecture, but was an extension of self.

Standing in this room at the island’s tip, I glance back toward the ruins and am reminded of Janus, the two-faced Roman god who looks to the past and the future at the same time. Facing the river, with my body in the sun, I notice a group of Japanese tourists photographing the monument in great detail. As I look toward Manhattan on one side and Brooklyn on the other, making a personal inventory of places and events, one of the photographers asks to take my portrait. As he does so, I keep my gaze fixed on the current and feel the permeable membrane between structure and self.

Zero Tolerance is on view at MoMA PS1 through April 13.

Meredith Monk will be performing a series of concerts at Carnegie Hall this spring, celebrating her fiftieth anniversary of performing in New York City.