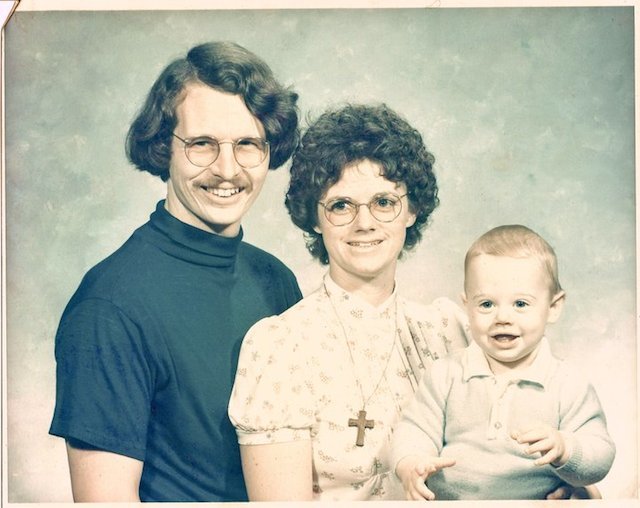 Family snapshot of Arrington de Dionyso (age 1) with his parents, 1976.

We are born with family, and we find our chosen family. Often whom we select overshadows our biology. Not always, but sometimes. It’s a balance. Peregrine Honig and Arrington de Dionyso are two prolific, inspired, intelligent creative people who I’ve chosen. They’ve become dear to me in a way that I can only describe as familial. They are my creative cousins, sisters, brothers and members. We see each other in-person a few times a year, but we always feel close.”

Peregrine, Arrington and I work in similar ways, intuitively moving through concepts and narratives. For the three of us, this way of making is a way of living — there is no separation between art and life. The conscious and subconscious are luminous and cohabitate. We thrive in that liminal space and avoid set schedules. We are informed by our emotions but not dependent on them for inspiration.

We all three met each other separately and there was an immediate sense of mirroring identities, as if we shared a language or had met before. If you look at our familial backgrounds, you wouldn’t expect us to relate. We come from vastly different places, and grew up in unparalleled worlds. As a teenager, I developed an interest in pop culture and gender as seen through screens, mediations and reproductions. Diligently recording daily episodes of Seinfeld and The Simpsons were as much a part of my adolescent routine as playing soccer, having long phone conversations with friends on my personal phone line, journaling every detail about my entire day, and writing poetry until my hand hurt.

My dad was a chemical engineer; he is an immigrant from Istanbul. My mom grew up in a Jewish neighborhood on the north side of Chicago. She became a psychiatrist, the first doctor in her family. I naturally play the game of psychoanalyzing film and television characters, observing their narratives and trying to understand how they got to where they are. I imagine that they are to me what my mom’s patients are to her. In 2014, after seven years doing the harshly changing seasons of Chicago, I relocated to Los Angeles where the seasonal patterns brush the still air in softer subtle ways. Family snapshot of Peregrine Honig as a toddler, 1978.

Peregrine Honig grew up in San Francisco’s Project Artaud in the 70s and 80s. Both of her parents went to California College of Arts and Crafts; her father worked as a carpenter and later studied mechanical engineering. Her mother taught her calligraphy as a young child, a funny skill that helped her appear older than she was because her handwriting was so old-fashioned. Her father saved all of her sketchbooks; Peregrine drew compulsively from the time she was three-years-old. Most of the childhood drawings that she made from the time she was two- and three-years-old portrayed women giving birth. The images startled even the adults who came through Project Artaud. Sometime years later, she moved to Kansas City to attend the Art Institute, her work ended up in the Whitney Museum of American Art’s permanent collection, and she placed second on Season 1 of the BRAVO reality TV show Work of Art: The Next Great Artist. I’ve visited and stayed with Peregrine and her husband Mark Southerland many times in Kansas City, Missouri; it’s a place I know as well as my own home.

For the three of us, this way of making is a way of living — there is no separation between art and life. The conscious and subconscious are luminous and cohabitate.

People you love and respect always connect you to other likeminded souls.  Peregrine introduced me to Arrington de Dionyso, and I was immediately taken with his visionary drawings and paintings of many tribal characters  — people he saw in dreams and brought to paper. There’s a lightness to Arrington; he is an artist and musician, oscillating between an intensive drawing and painting practice, world music tours, and spiritually inspired music-making with Malaikat dan Singa, Old Time Relijun, and The Naked Future. His parents are Methodist ministers, and he grew up in various cities around the country — Chicago, Little Rock, Arkansas, and Spokane, Washington. Now he’s in Olympia, Washington. We’ve crossed paths in Chicago, Los Angeles and Portland. Where we meet up feels less important than the states of mind we are in when we share physical space, when our minds meet and we see eye to eye.