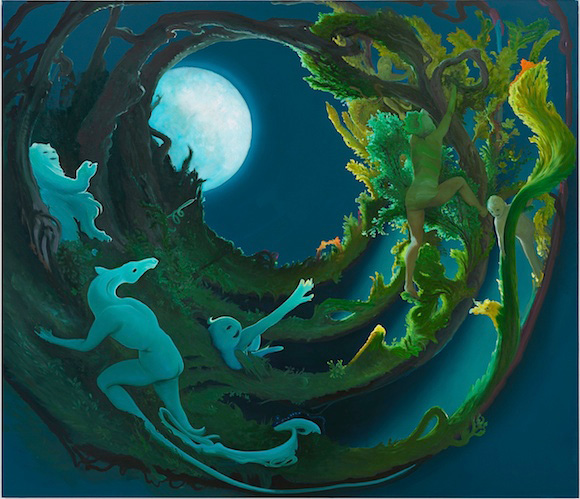 I’m thinking about sincerity and the fact that it has had such a checkered past in Western culture, going in and out of vogue. At times, sincerity has been lauded as a virtue—for instance, during the Romantic era—while at other points, it has been seen as an encumbrance, a quaint and sentimental relic. These days, it often seems that sincerity has become a burden, one demanding a genuine response.

But that is precisely the point: sincerity evokes a response. Perhaps today—so charged with change and technological advances—sincerity can once again be regarded as a virtue. After all, isn’t sincerity the aching for authenticity, the passionate longing for what is real?

I ask myself, “Why do I need the authentic? Why is it important?” I know that I am saddened by the inauthentic, but there is something else that drives me to sincerity. For me, sincerity is a call to action. As artists, we don’t need to obscure our feelings for fear of retribution or censure. The only reasons not to paint what I wish are my personal fears: Can I allow myself to risk being unpopular or misunderstood? Do I need to hide behind an intellectual posture? I believe it is cowardly for me not to be direct and say what’s in my heart.

As an artist, I’m less interested in finding the meaning in any given painting or being analytical than being guided by a sense of urgency, immediacy, a desire to participate with the creative force. To me, making a painting is similar to how physicists describe the cosmic big bang. It happened and spun its own rules. I trust that when I create from a place of sincerity, this does not preclude the work from being read ironically or possessing multiple meanings, if the work is founded upon some fundamental, experiential truth. I suspect, however, that were I to aim for irony, I would come off as insincere. Not that sincerity needs to be sanctimonious. It can be elastic, playful, and rugged; it should be able to withstand some holes knocked into it.

I think that sincerity is a direct path to joy. I know that joy is a hard word for most people to hear, but I believe in it. When joy occurs in art, it is infectious and engaging. The subject matter doesn’t need to be joyful in order for joy to be found in the creative act. The shape of leaves, the soft wet grass sparkling in the night air, or the particular quality of the medium and how it interacts with the surface: these are examples of joyful exchanges. Joy is the celebration of something emerging out of nothing. I like to judge a work of art not by its style or content but rather by its effect on me. Sincerity asks for candor—to go beyond self-consciousness and inhibition. At first this task can be daunting, but then its true nature is revealed: it’s fun! It’s like a marvelous treasure hunt, a search for buried treasure.

Art—and sincerity—open a door into another dimension, a threshold to a magical realm that, once contacted, informs and transforms mundane reality. By contrast, to create art from an intellectual pose, or to be worried about what’s hot in the art world, seems arid and devoid of life. I believe that art can be a spiritual experience, which invites the soul to grow. Contributor
Inka Essenhigh paints her visions: richly colored, distorted fables peopled with archetypes, sprites, and anthropomorphized nature. Essenhigh’s work has been included in numerous shows in the United States, Europe, and South America, including Comic Abstraction at the Museum of Modern Art in New York, USA Today at the Royal Academy of Arts in London, England; Second Berlin Biennale, Germany; SITE Santa Fe Biennial, New Mexico; and Bienal de Sao Paulo, Brazil. She has also exhibited her work in many one-person shows in museums, such as Albright-Knox Art Gallery, Buffalo, New York; Museum of Contemporary Art, North Miami, Florida; DA2 Domus Artium, Salamanca, Spain; and Fruitmarket Gallery, Edinburgh, Scotland. She is represented by Victoria Miro Gallery, London, and is currently preparing for Between Worlds, a show of new and older work at the Frist Center for the Visual Arts, Nashville, Tennessee, scheduled for the summer of 2016. She lives and works in New York City.
Go to articles