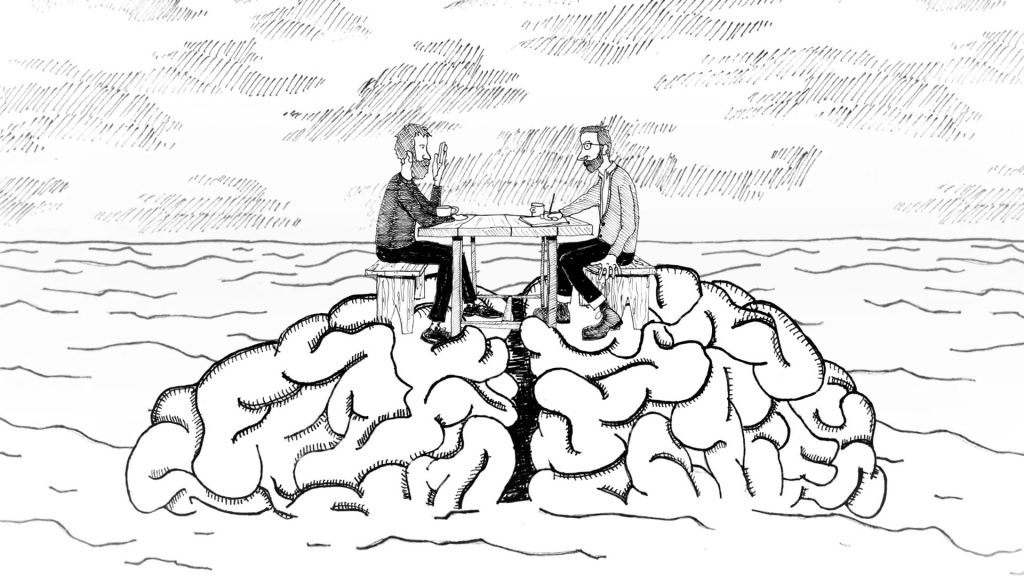 What if your life was a cartoon? Bryan Zanisnik and Eric Winkler meet at a Brooklyn cafe where Zanisnik shares outlandish stories of his life as an artist that Winkler turns into comics. “After years of friendship, I know that he’s going to tell me a crazy story,” says Winkler, “and I’m going to have to say: So which part was really true?” The two friends catch up on Zanisnik’s latest exhibition, the Philip Roth Presidential Library (2016) at Locust Projects in Miami, created from hundreds of of the author’s books. The installation echoes a previous work, Every Inch a Man (2012) at Abrons Art Center on Manhattan’s Lower East Side, in which Zanisnik read Roth’s The Great American Novel (1973) during a performance. Winkler’s comics, animated for this film, recount Roth threatening to sue Zanisnik over the homage. “I think Bryan’s always wanted to be able to draw something. He can’t do it though,” says Winkler, “His sculptures are like drawings. He tries things and erases things.” The film follows Zanisnik as he builds sets for photographic tableaus, first at Smack Mellon in DUMBO and later at the Queens Museum in Flushing Meadows Corona Park. Venturing out of his studio, Zanisnik takes pictures of his assemblages in front of monuments from the 1964 New York World’s Fair, suggesting how resources for artists in the city are becoming further and further out of reach. The film ends with Winkler and Zanisnik discussing the recent death of both of their mothers to cancer. Zanisnik, who collaborated with his parents in close to thirty performances, ultimately reunites with his mother in Winkler’s animated comic.