Cheryl Pope and the Poetics of Yelling 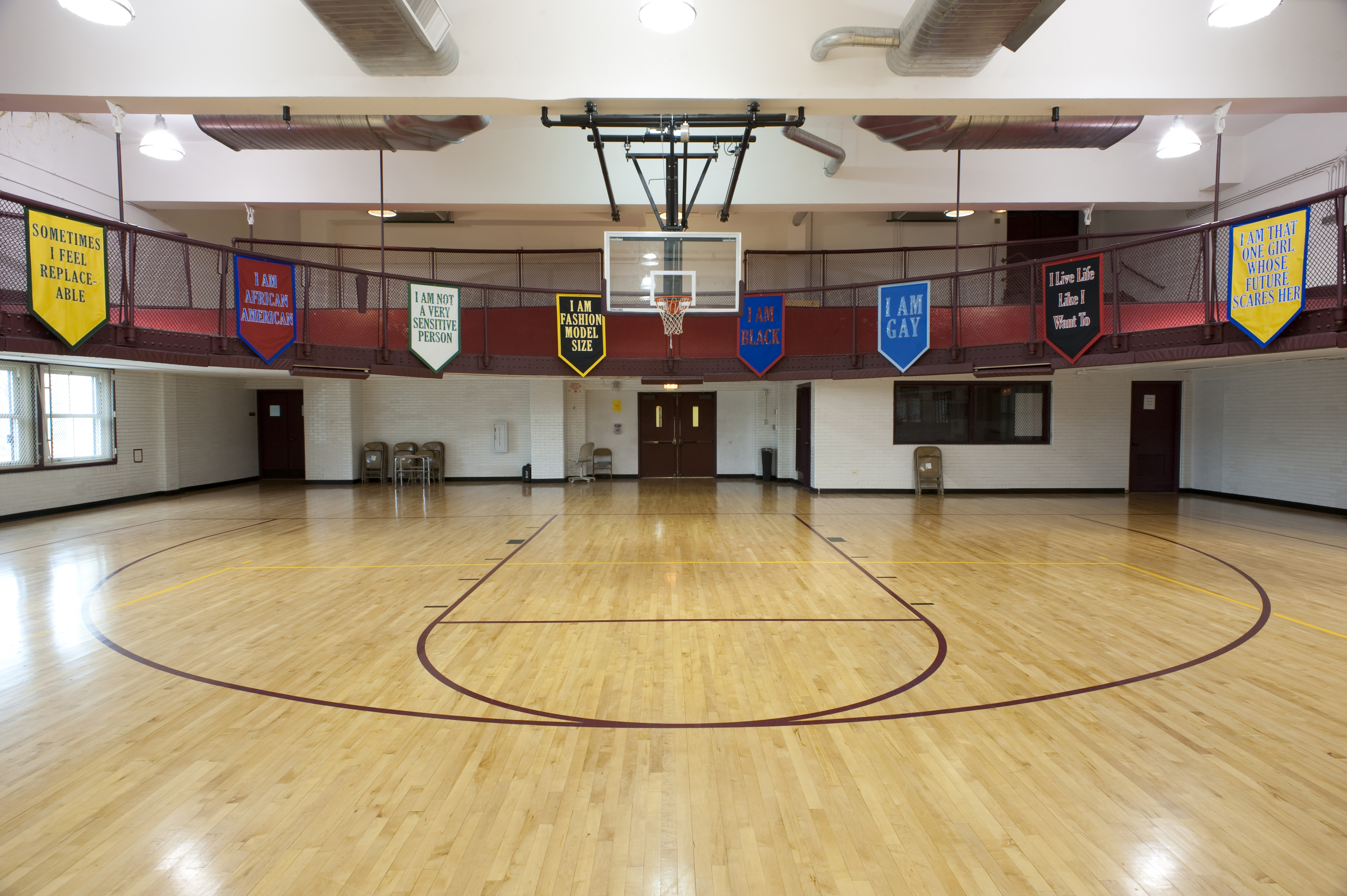 Between 1880 and 1920, American cheerleaders were called “yellers.” This term was the inspiration behind Cheryl Pope’s ongoing project, Just Yell. Begun in 2013 and developed with hundreds of Chicago teens, Just Yell confronts the city’s gun violence through collaborative art projects that use the aesthetic of high-school athletics to create a space for poetry.

For Pope, a Chicago native and former studio manager for the artist Nick Cave, design is at the heart of her practice. Pope interprets design as a way of understanding, as an experience. For Just Yell, she was interested in designing an experience of listening, one that would enable the act of truly hearing another person. In an interview, she explains, “I wanted to communicate listening as a felt experience, where the physicality of listening was front and center.”1

Pulling inspiration from spoken word and poetry, Pope developed ideas for projects that would offer space for a multitude of voices and in which the body was critical. “The body is the preface before a conversation,” she says. Combined with the ritualism of sports culture, the works would offer room for individual expression as well as team collaboration. I wanted to communicate listening as a felt experience

In 2013, seven Chicago-public-school teachers responded to Pope’s requests and invited her to work with their students, most of whom lived in neighborhoods dealing with the effects of gun violence. Through writing and design workshops, Pope and the youths developed projects that took the iconography of varsity sports—patches, banners, yearbooks, and megaphones—to create sites for language.

For one project, Pope asked each student to write down one truth and one lie. Selected responses were then stitched onto championship banners and hung from the gym’s rafters. A viewer has to look upward to read the texts, which include phrases such as, “I live life like I want to,” “Sometimes I feel replaceable,” and “I am quiet.” Seen together, the colorful banners convey a sense of release and confession, confounded by the viewer’s recognition that each statement may not be true. Addressing gun violence in Chicago, other projects offer spaces for the youth to mourn. Pope notes that citizens often hear the statistics, but the bodies of the individual victims remain absent from this data. Because social norms often put distance between systemic social inequities and this violence, it was important to Pope to design spaces that confront the reality while activating spaces for expression. This idea is captured in a freestanding sculpture that features two megaphones directed at each other. In this work, speaking and receiving are captured at the same moment, inviting viewers to consider what needs to be yelled.

After Pope’s exhibition at the Monique Meloche Gallery in Chicago, engaging presentations at the Poetry Foundation and the Chicago Cultural Center took place. At the Poetry Foundation, the artist and the youths created Walk With Me, a performance in which a teen invites an adult viewer to walk with her through the exhibition space. The participants could walk in silence or recite poems to their companions; both members of the pair engaged in a performance of listening. Reflecting afterward, many of the youths felt that they had been heard during these interactions. “They opened up when they felt like people were truly listening to them,” Pope says. We don’t give up here

The beauty of the Just Yell project is its range of decibels. Some of its works are quiet and intimate, such as carvings in the tops of school desks. Others are loud, such as a flower arrangement that reads, “Too Young to Die.” The diversity of expressive range is intentional; how one participates depends on what one needs, whether it is delivering a poem or writing down a private thought. And while the project exists alongside national participatory-art practices by artists such as Suzanne Lacy and Hank Willis Thomas, it is rooted in the community of Chicago. For Pope, it is essential to confront the issues by working in the physical locations where they arise. “Chicago hurts in the heart the way love hurts in the heart,” she says. “We don’t give up here.”

Though Chicago remains at the core of the project, the work lends itself to a conversation about violence, youth culture, and systemic racism that can be felt nationally. After all, if varsity jackets and high-school cheerleaders yell anything, it is “America.” 1. Unless otherwise noted, all quotes by the artist are from a phone interview with the author on October 13, 2016.