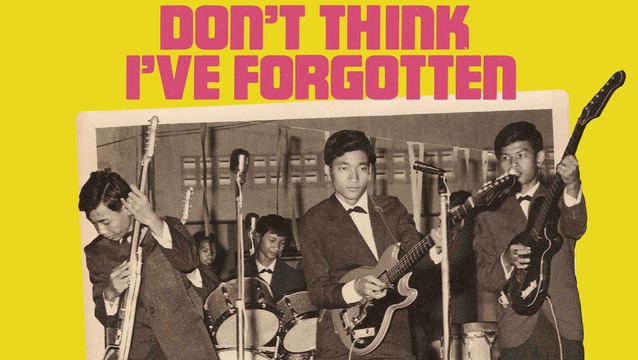 From the traditional Southeast Asian melodies to the striking arrival of electric guitars, psychedelia, and go-go chicks grooving in discothèques, and the brutal military dictatorship that changed the whole nation, John Pirozzi’s compelling feature-length documentary remembers it all. Don’t Think I’ve Forgotten: Cambodia’s Lost Rock and Roll (2014) illustrates a generation of pop musicians who sang and danced through the 1960s and ’70s across periods of independence, civil war, and the infamous reign of the Khmer Rouge in Cambodia, during which most of the musical artists were eradicated along with every trace of their contribution.

Compiling original song recordings, archival footage, and contemporary interviews with surviving musicians, fans, and historians, Don’t Think I’ve Forgotten constructs an experience much like a vinyl analog recording does: the grittiness and chronological narration make evident the passage of time. After World War II, Cambodia’s newly gained independence led to the emergence of a vibrant popular-music scene. Musicians and songwriters were inspired to combine Khmer musical traditions with the influx of South American, Afro-Cuban, French, and American influences. The result was a wide range of musical styles, from popular ballads to surf rock, post-punk, and jazz—as well as some big hippie hairdos.

Of course, viewers come to the film aware of the country’s terrible fate. First came the American bombs during the Vietnam War; then, in 1975, the Khmer Rouge ascended with its radical vision of an agrarian society that outlawed so-called “old culture” and Western influences. The film features surviving musicians and fellow Cambodians who share their experiences of starvation, persecution, and the genocide that led to the death of their families, proposing that the viewer see and hear the scars that are part of the Cambodian memory, similar to the scratches and crackles that are inseparable from the sound of a vintage record.

the voices of these Cambodian luminaries carry a sense of immediacy, a creative energy that stems from the urgency of self-expression

But the melody plays on. Whether it is Huoy Meas’s melancholic voice singing of longing and personal torment, Pen Ran’s soulful mambo rhythms celebrating female liberation, Yol Aularong’s rebellious critique of conformist society, or the Drakkar band’s hard-rocking prowess, the voices of these Cambodian luminaries carry a sense of immediacy, a creative energy that stems from the urgency of self-expression. The film captures the shared excitement of discovering a new sound, and we viewers can dance along with the Cambodian youth who lost themselves for an ephemeral moment to the sensations of music and the pleasures of freedom.

Pou Vannary sings a bilingual version of Carole King’s “You’ve Got a Friend.”

Pirozzi’s efforts to restore this rich musical heritage are honorable, particularly in a country where artifacts ranging from historical monuments to family photos have been destroyed and memory has become highly inaccessible. Over the past ten years, the filmmaker and producer/ lead researcher LinDa Saphan managed to trace the stories of surviving musicians, many of whom have migrated around the world. They also received the Cambodian king’s permission to access the national archives, collaborated with musicologists to restore more than twenty tracks from extremely rare vinyl copies, and even hired a detective to track down the owner of a homemade video. The film skillfully fills in the missing pieces with reenactments shot on Super 16mm film as well as colorful animations inspired by album covers of the era. Album covers by Cambodian pop stars full of vibrant colors before the takeover of the Khmer Rouge in 1975.

Recovering the past is important because it reminds us to move forward. In the past two years, the film has been screened in film festivals as well as in temples across rural Cambodia. Saphan recalls lively discussions with audiences who were relieved to know that some of the music survived, and with young people who tearfully expressed that they finally understand their parents’ generation. Most recently, a screening at Asia Art Archive in America included a live Skype conversation with Nate Hun, a thirty-year-old Cambodian American vinyl collector, who shared his plans for developing a physical archive. Perhaps the most remarkable of all, the surviving musicians featured in the film and fellow Cambodian musicians performed together in two live concerts held in conjunction with the opening screening. With this renascence, there seems to be hope that this rock ’n’ roll will not only be remembered but also be carried on.

As these haunting voices live again, they celebrate the creative power and resiliency of the Cambodian people

Don’t Think I’ve Forgotten (2014) is an example of how a documentary travels between the past, present, and future. As a living archive, it activates spaces for the community to engage in practices of remembering, learning, and recreating an integral part of the Cambodian identity that has long been silenced. As these haunting voices live again, they celebrate the creative power and resiliency of the Cambodian people.