Seeing These Streets: Analyzing the Visual Landscapes of Urban Spaces Over the past fifty years, street art has become one of the most common forms of contemporary art in urban public spaces. Sometimes it’s called vandalism and other times the more generic term, ‘graffiti.’ These aesthetic acts in public spaces are not only worthy of discussion, but also important to teach since they often contain social cues that help us decipher the visual landscapes in which we live. Teaching students an academic vocabulary to discuss street art helps them understand and analyze the nuance that can exist in what appears to be mere paint splatters on a street sign. An important conversation is happening in our urban spaces, and you don’t need to purchase an admission ticket to see it.

This intricate discussion on Street Art, Vandalism, and Graffiti is one that I facilitate every year at Manhattan Hunter Science High School, where I teach a Contemporary Art History class. For the past eight years I’ve taught this course, I’ve had complete freedom in terms of curriculum design, and I have constructed the class I wish I could have taken in my own undergraduate studies. In the course, we investigate and study exhibitions that are currently on view, and then go see them in person. I tend to focus on exhibitions that have an edge of controversy to them, as they provide the largest possibility for dialogues that have real world consequences. For instance, when the Museum of Modern Art responded to the Trump Administration’s first travel ban of 2017 by hanging work from their collection by artists from these banned nations, we engaged with that institutional response. When the Solomon R. Guggenheim Museum received threats for featuring artwork that involved live animals, my students unpacked the disagreement. Each year the curriculum is completely reinvented but I always begin the year focusing on Street Art, since it addresses the abundance of contemporary art that is constantly being refreshed in our public spaces and it is the only art form that my students have unlimited free access to. Street Art has such a presence in our day-to-day lives, especially in diverse urban spaces like New York City, and studying its roots can provide us with a wider understanding of the communities that make up our cities. Through careful observation, documentation, and categorization, we can decipher the language and concepts that reach beyond the classic combination of spray paint and a wall. 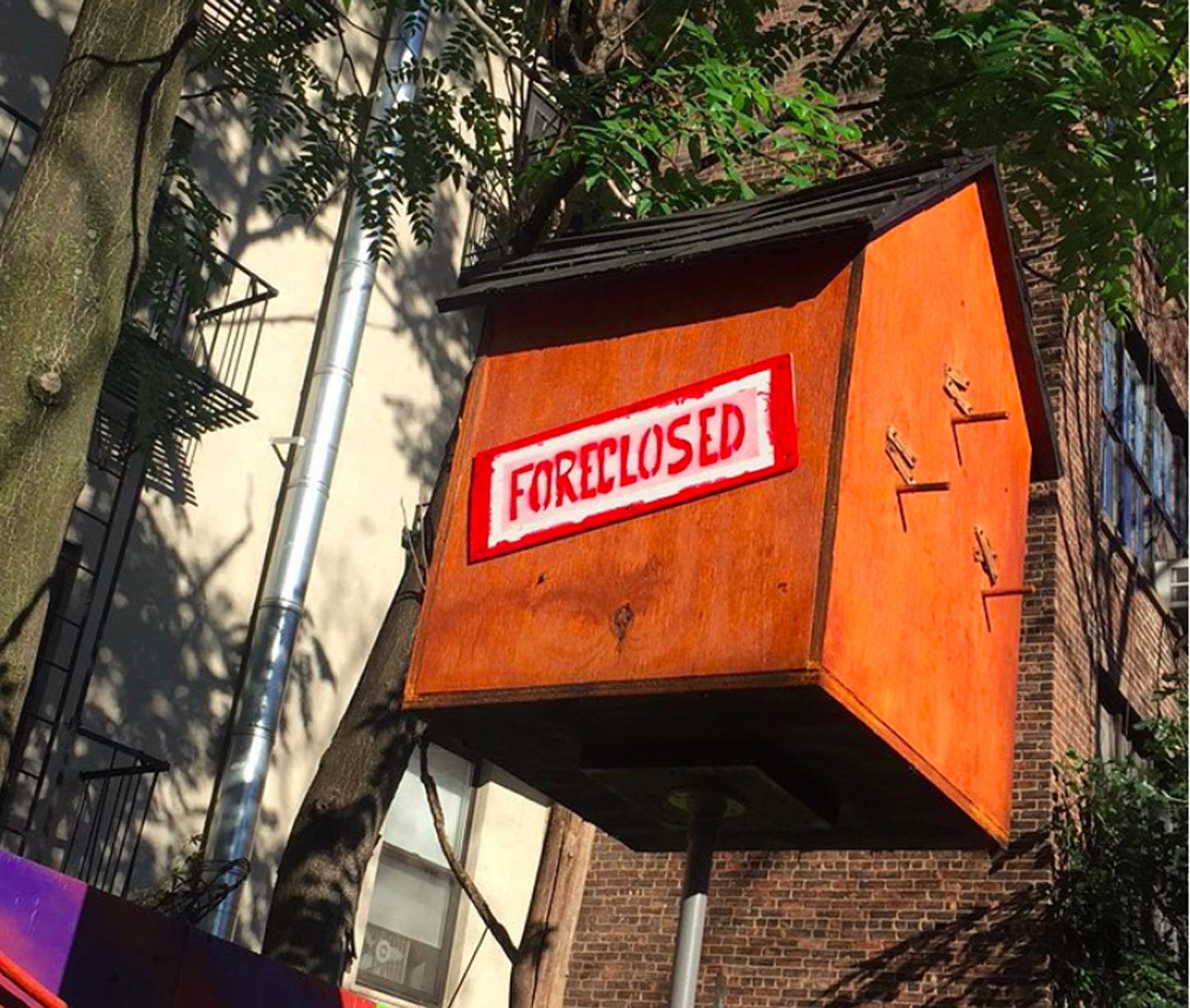 For many of my students, studying street art is a bridge between understanding aesthetics in the real world and aesthetics in museums and galleries. It’s important for students to learn to move between their usual interaction with artistic imagery (largely via social media) to topics where they can sustain elongated discussions and dive deep into reservoirs of big ideas. When setting up this unit of study each year, I have three benchmarks that I consistently aim to reach: students should understand origins of graffiti in the 1970s, the global impact of the graffiti movement as it evolved into the street art genre of present day, and finally the aesthetics of the local neighborhoods where they live.

“An important conversation is happening in our urban spaces, and you don’t need to purchase an admission ticket to see it.”

On the first day of this unit, I’ll often begin by asking questions about the spaces where we live: “What does your neighborhood look like? Describe it with details from memory.” This exercise always yields interesting results and provides a baseline for how students will come to understand spaces in which they live, as each night they’ll go back and find something new for homework. Through this slow accumulation of observations, students develop mental maps of their neighborhoods and within a matter of weeks, their understanding of these spaces undergoes a radical transformation. The affordability of smartphones with geotagging and high quality cameras have been a major boon for assignments like this. In the next phase of the unit, I introduce artwork from some local street art favorites with strong connections to New York—artists like Lady Pink, Cope2, BNE, Swoon, and the collective Tats Cru (to name a few). As these lessons continue, students consistently come to class excited to have found these works of art near their homes, and academic vocabulary starts finding its way into the discussions. Soon, students are able to differentiate between stickers and wheatpastes, between tags, throw-ups, and burners. As we unpack the aesthetic descriptors for the triumvirate of Street Art/Graffiti/Vandalism, this unit inevitably ends up orbiting around the central question of who is allowed to design public spaces.

The next stage of this unit typically reviews a number of artists that are getting up locally and internationally; we cover the wheatpasted works by Human Bote, the crocheting of Olek, the wide array of amazing work by Tatyana Fazlalizadeh, as well as many more artists featured on the Houston Bowery Wall, 100 Gates Project, and the Coney Island Art Walls. Of course, we discuss Shepard Fairey, whose work sets off a firestorm of curiosity in the students, who learn that the Obama ‘Hope’ graphic, the OBEY clothing brand, and a slew of other images around NYC are all connected to the same artist. His work raises a number of issues, from political criticism to social justice to propaganda to appropriation. More than anything though, his work epitomizes the idea that popularity and power can be gained through visual culture—perhaps the most relevant parallel to the digital age in which we live. At this point in the unit, both the idea of street art and the physical manifestations of it truly begin to rise to the attention of my students. I find that my morning inbox is flooded with images they’ve shot from their urban investigations the day before. Students comment that they cannot help but notice street art everywhere they go, wondering if it was always there to begin with. At this exact moment of studying street art, the mise-en-place has been set, and a final project is assigned: to create a video documentary for the visual landscape in their neighborhoods and in the process, find answers to the question of who has been affecting the design of the spaces in which they live.

This documentary project mixes anthropological studies with art history research, with a heavy emphasis on personal history. Each student must tell their story, tracing where they’re from and how those stories are visualized in their neighborhoods. Some students are wary at first—it’s difficult for areas of suburban Queens to measure up to some of the examples from class. I remind students that the point is not to find big street art names in their neighborhood, but rather to find out that their neighbors are artists who are working with the common spaces around them. Mr Gore. Mural in the Bronx, 2017. Photo by Promia Chowdhury.

There are potential technical challenges with video recording and editing, but as long as students continue to bring in new videos and images each day, the process takes care of itself. There’s an eagerness that takes over when students begin to learn more about the common tags and stickers they are finding. Often, students encounter a well-crafted sticker or wheatpaste, and research reveals it to be an advertisement for a product, often related to fashion or music (a corporate advertising technique known as ‘wildposting’). There’s always a tinge of disappointment when they learn this; like the clandestine aesthetic object they’ve been fascinated by has been hijacked just to sell a product. But other times they discover artists like UnCutt or Nicer (from Tats Cru) and begin following their work through Instagram, regularly updating the class and sharing news when their exhibitions pop up at Wallworks Gallery in the Bronx (one of the few local institutions that consistently exhibits new work by street artists).

“Through studying street art, students can learn to look critically at how anonymous individuals are affecting the public spaces in their city.”

Through studying street art, students can learn to look critically at how anonymous individuals are affecting the public spaces in their city. While some of it may look like vandalism on the surface, many students quickly realize that a wealth of effort and aesthetic precision often goes into these urban interventions. They begin to understand that everywhere they go has been affected by layers of artists and designers. Educators who teach in or near such aesthetically active public spaces can open this world of possibility to their students. And if you still have those around you who are clinging to the question of “Why is this art?” then I would paraphrase an answer I’ve heard once before: “That’s a boring question and it’s already been answered.” There are extensive artistic processes that can be found beyond the traditional museum or gallery—and they’re right outside your door.