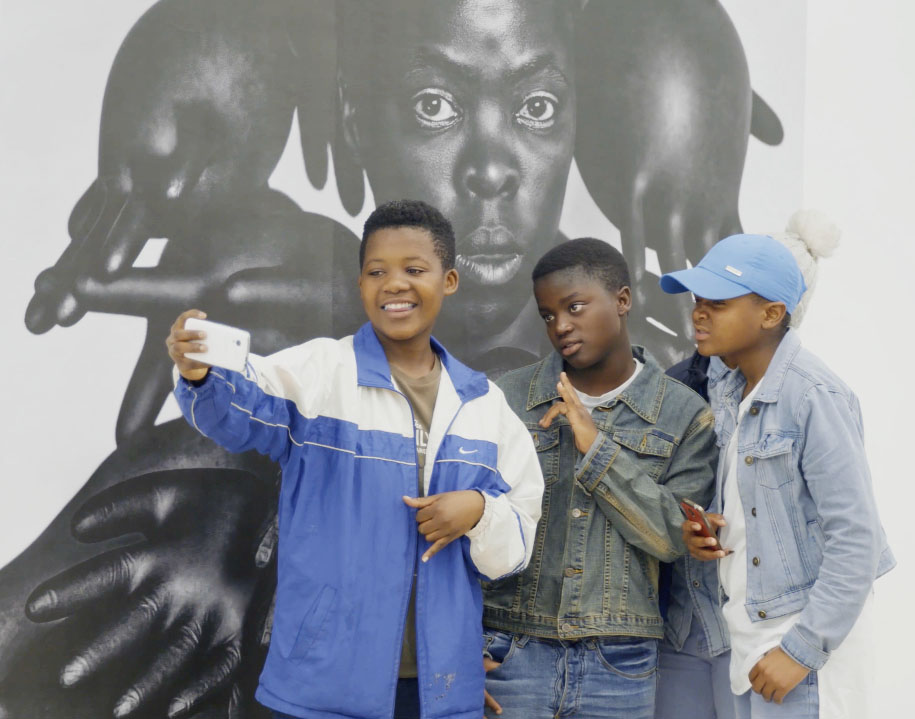 Three young gallery-goers posing in front of a self portrait by Zanele Muholi.

Back in March 2018, Lizzie Fortin, a public high school art teacher in Worcester, Massachusetts posted a tweet that caught the attention of the Art21 offices. Lizzie posted the kind of classroom picture expected of a teacher on a Monday morning: a simple cell phone snapshot of one of her students, a young Black woman, watching an iPad in a classroom. What was special about this picture was the story that accompanied it. Lizzie’s tweet began like this: “As she opened the @Art21 video of @Karawalker_art she whispered, she’s Black, and then plugged in her headphones so she could listen.” Lizzie’s post continued: “She told me, she didn’t think Black women were artists.” The posts ends with the shareable hashtag: #RepresentationMatters.

art making is essentially about making a choice.

This small gesture, shared with us via an educator who teaches with Art21’s films, captured the immediacy of our work that isn’t always so tangible. Jonathan Munar, our head of digital, shared the morning tweet with the Art21 staff and within minutes, I reached for a tissue. It was an incredible reminder of our work and its purpose. It reaffirmed our hope for how our work will be received: as inspiration for a future generation of artists and creative thinkers.

Alongside a brand new season of our hallmark television program Art in the Twenty-First Century, Art21 has published a book for the first time in several years, addressing what it means to “be” an artist. The book is aptly called Being An Artist. John Baldessari argues in the volume’s first chapter that “art making is essentially about making a choice.” Through interviews with 43 artists previously featured in our films, the book explores the hard decisions that artists make every day, decisions that reaffirm their choice to devote their life to art and their trust in that choice. To be an artist is a bedrock decision, and once made, there is little going back.

Since coming to Art21, I have gleaned two things about what being an artist means. The first is that, sometimes, somebody calls you an artist and the moniker sticks. The second is that being an artist is tantamount to naming oneself such. Otherwise said, it can be an honor self-anointed, despite others’ best interests for you and your livelihood. Whatever truth one ascribes to this explanation, being an artist might not be an easy path, yet it is distinctly human to be one.

To be an artist is a bedrock decision, and once made, there is little going back. As LaToya Ruby Frazier reminds us, in her interview in our new book, “It’s a 24/7 job.” Art21 is similarly unceasing in its purpose: to give audiences the permission to be artists. Hearing directly from artists about their choices allows others to make such choices, too. At Art21, we celebrate that choice and so for that reason we have made it the subject of the last few months of 2018.