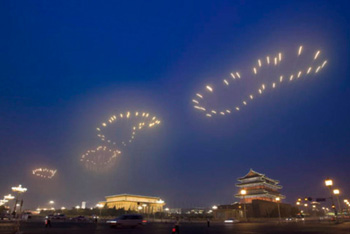 Over 34 million people watched the dazzling opening ceremony of the 2008 Olympics in Beijing. Days later, eager buzz-killers were quick to point out that deceptive “augmentations” were actually employed for television wow factor. Spectacle “constructions” included a lip-synching nine year old girl and a dubbed fireworks display conceived by artist Cai Guo-Qiang (Season 3), who was installed as director of visual and special effects.

Cai’s Footprints of History set off a series of 29 “starbursts” that traversed the sky from Tiananmen Square to the Olympic Stadium. Though the pyrotechnics actually took place, broadcasters used a 55-second digital film as surrogate, claiming the actual effects via television would have been obscured by atmospheric conditions as well as endangering helicopter camera crews.

In an issued statement, Cai responds to the “controversy”:

The explosion event Footprints of History: Fireworks Project for the Opening Ceremony of the 2008 Beijing Olympic Games consisted of a series of 29 giant footprint fireworks — one for each Olympiad — over the Beijing skyline, leading to the National Olympic Stadium. The 29 footprints were fired in succession, traveling a total distance of 15 kilometers, or 9.3 miles, within a period of 63 seconds.

It is quite customary to prepare a backup reel for major televised events of this scale, and this has been true of the opening and closing ceremonies of previous Olympic Games. We were aware of this and thus created our own reel from dress rehearsal footage of the footprint fireworks. The sequence was then created using computer graphics.

From my own perspective as an artist, there are two separate realms in which this artwork exists, as two very different mediums have been utilized. First, there is the artwork that exists in the material realm: the ephemeral sculpture. This was viewed by people attending the ceremonies inside the stadium and standing outside on the streets of Beijing. This artwork was documented from various vantage points on video, which has been broadcast by many international media outlets.

Second, there is a creative digital rendering of the artwork in the medium of video. It is a single version of the event viewed by a large broadcast audience. Such a conceptual work can exist simultaneously in these two separate realms. And perhaps to also take Footprints of History into this second realm was necessary because in many of my explosion events, such as Project to Extend the Great Wall of China by 10,000 Meters, the very best vantage point is not the human one.