Art and Sport in L.A. A few artists I’ve met recently have considered quitting the art game. They don’t want to play in a sphere that’s all about self-perpetuation; they don’t want to court galleries, wield theoretical “art speak,” defend their art-historical relevance, or frequent exhibition openings. The idea of art as a game is nothing new, but some of what I’ve seen and read lately has changed the way I think about it. What if art is more of a sport than a game? I’m thinking of sport in the most positive sense possible: it’s something we do in order to feel a little more in touch with our bodies, our teammates, our lives.

I trolled Jennifer Doyle’s soccer blog last Sunday, which is something I do periodically. Doyle is a writer and a literature professor at UC Riverside, but she’s also an avid soccer fan who plays pick-up games throughout L.A. She writes some sprightly art criticism, but she may be at her best when she’s talking about her sport.

In a post from April, Doyle talks about representations of athletes: “Sports photography tends to amplify the testosterone even in failure, when our sports heroes are made to look more like fallen soldiers than human beings. Not often do we see them look like the big babies they sometimes are.” She goes on to discuss the watercolors of Barcelona-based blogger and artist Yrsa Roca Fannberg. Fannberg’s paintings of soccer players convey the very human, sometimes juvenile characteristics of athletes. Her affection for the game doesn’t always mask her disillusionment, however; sport, like life, involves a certain amount of disappointment.

Just last week, Fannberg posted a series of new watercolors to her blog, art versus sport. They’re whimsically colorful and energetic, though they aren’t necessarily kind. A painting called Don’t cry on my shoulder crudely depicts two Barcelona players patting each other’s backs. Of this image, Fannberg writes, “I was not that happy about those two at the time and I think you can see it in the effort and love I did not [my emphasis] put into the picture.” As an artist, Fannenberg particpates in the sport; she articulates her reactions to the players and the moments of the game. She’s an active, vested fan who makes the sport more interesting—even when it frustrates ger—by contributing to the conversation that surrounds it.

When I went gallery hopping in L.A.’s Chinatown on Saturday, I wasn’t really preoccupied with this “art-as-sport” paradigm, but it reared its head anyway. The main room at Jancar Gallery features work by Austrian painter Hubert Schmalix. Jasmine Little’s work is in the second room, and, in a painting called Hubert’s Studio, she has appropriated figures from Schmalix’s paintings and reconfigured them in an imaginary studio space. According to the gallerist, Schmalix, who knows Little, had no idea the painting existed until he walked into Jancar one day and saw it. “She’s making fun of me,” he said. 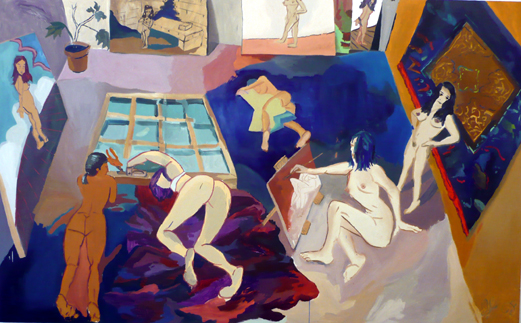 Another painting by Little, Tribute to Mike H.J. Chang, depicts paintings by artist Mike Chang arranged in a skewed, undecipherable outdoor space. At the opening, Chang jumped in on the action and sold prints of his work outside the gallery. 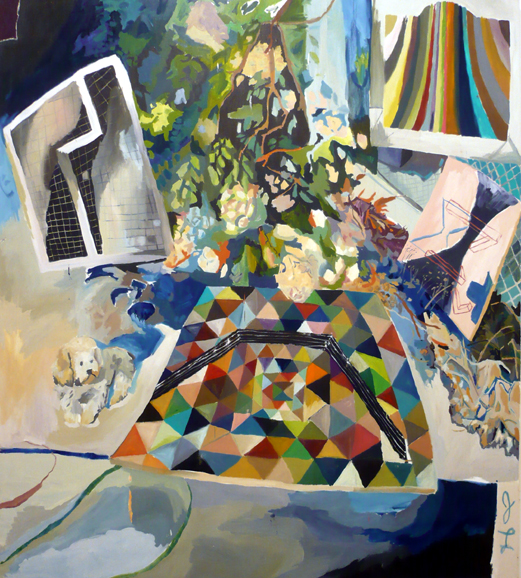 I’m not really soccer savvy, but this seems to me like the sort of playful, easy passing back and forth that might occur in a low key pick-up game among people who know and love what they’re doing. In the perfect art world, in which good sportsmanship prevails, artists borrow each other’s ideas and become part of one another’s histories, not because they want to assert themselves, but because they love their sport and they want to explore all the nuances of the game.