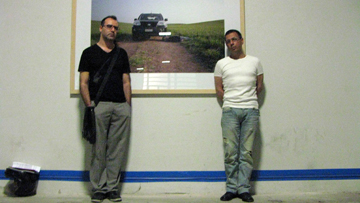 kaput. is a quarterly online magazine on contemporary art, which was founded last year in Athens, Greece. The name of the magazine was inspired by Hal Foster’s widely-known phrase  “[…] art history is as kaput as art is” found in the Design and Crime (and other Diatribes) book, published by Verso books in 2002.

kaput. features articles, essays, reviews, and interviews in both Greek and English from Greece and abroad. The editors do an amazing job in putting together diverse teams of contributors for each issue. Thus, this is how a constructive, informed and critical voice in an ocean of mediocrity is beginning to hold its own.

I am very pleased to introduce to you the founders of kaput., who are no other than writer and curator Christopher Marinos and writer and independent curator Thanos Stathopoulos. It’s important to note that Marinos is one of the curators of the 2nd Athens Biennial, which will take place in June 2009 and that he also serves as a correspondent for Flash Art International and Modern Painters.  He is also a founding member of the Reading Group. Stathopoulos has equally written extensively on artists’ works for exhibition catalogs and he is a regular contributor to the Eleftherotypia newspaper.

This dynamic duo has formed an ambitious yet fundamentally needed forum of dialogue, for the sake and prosperity of Greek contemporary art. As an artist, I find immense comfort in knowing kaput. is at arm’s reach. Christopher, as you’ll read later on, acknowledges Athens Art Review, which paved the way for kaput. It’s also worth mentioning that the magazine was exceptionally edited by Theophilos Tramboulis. It’s an optimistic evolvement of the field when one can begin to trace things back to genuine initiatives. This very continuity that makes kaput. a valuable project for Greek art.

If there was a sensor that could detect when a community is ready to talk, or when its thoughts have nicely brewed and matured, things would be easier. In this case, we have two individuals who are sensitive to the art world and alert on what’s out there. Marinos and Stathopoulos are strategically setting Greek art up against a demanding international discourse.  Intellectually, creatively, sociopolitically, this may turn out to be a challenging yet exciting time for our generation in Greece, and those who are behind creative thinking outlets may have the most exciting time of all.

Considering and further acknowledging the importance of their service to the community, I invited both Christopher and Thanos to tell us a little bit about kaput. and its mission. Our conversation floats on the very surface of the job and responsibilities of an editor, but I hope I’ll have a chance to talk to them again in the near future.

Georgia Kotretsos: How did your collaboration and the idea of an online quarterly magazine come about? Thanos Stathopoulos: The idea of creating a new magazine lies (as with any collaboration) in particular relationships, on dialogue and people who work well together so that they can bring it about. In our case, the dialogue and collaboration began some time ago. The die was cast and the magazine came about as a natural consequence. There was a common need and, in fact, an imperative because of the lamentable fact that once again the Greek art world was faced with a vacuum as far as art magazines were concerned. The choice of an online magazine reflected our inclination as well as what was considered feasible.

Christopher Marinos: However, beyond the need for people who work well together, we shouldn’t ignore the fact that a magazine is also a collective matter. In the past few years, important progressive steps were taken in the Greek art world that have contributed decisively to artistic output and to kaput. There are many new good artists, new exhibitions spaces, as well as a new group of curators and theoreticians, most of whom have studied abroad. The magazine could not have existed without this “springtime” in Greek art.

GK: From the first issue, you set the tone for kaput. It’s an ambitious, sound voice in an ocean of mediocrity. Talk to me a little bit about its structure and mission. 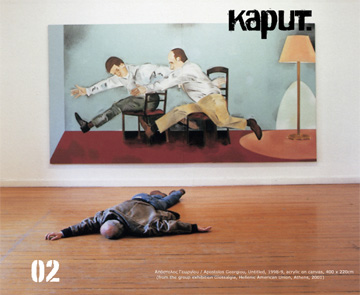 CM: As I said before, kaput. did not appear out of the blue. There have been important attempts by other colleagues—such as GAP (Greek Art Projects) that was published by Michalis Paparounis and the Athens Art Review that was published by the Athens Biennal—but for one reason or another they did not survive. Many of the people who worked for those magazines are now helping us in our effort. The difference with kaput. is that it also gives many artists a chance to try their abilities at writing and especially at criticism. This alone implies a different way of appraising the existing situation. Our objective is for the magazine to reflect the more general dynamism of Greek art in relation to international developments. The first two issues highlighted Greek art of the past decade and, at the same time, tried to interpret or present certain ideas regarding the local art scene. In the third and fourth issues, our focus broadened and centered on ideas that more or less concern contemporary art today. The function of archives, referentialism, quotation, documentary, and collections are some of the topics that we’re interested in examining. Eventually we want the magazine to present the works of certain talented Greek artists to a foreign readership.

GK: You’re a month away from the completion of the 4th issue of your first year. What’s your experience so far? CM: The fourth issue, which will circulate at the beginning of February 2009, will be the most comprehensive so far. We hope that the course we’ve taken toward something better will continue with the following issues as well. It takes a lot of work and patience to reach the stage where you can feel completely satisfied with the objectives that you’ve set. The first three issues were well received and the comments we heard were very encouraging. As a result, our sense of responsibility toward our readers and the local artistic community has grown.

GK: What’s your long-term goal for kaput.? What will it take to keep you securely in business for as along as you wish?

TS: The challenge for kaput., aside from its continued existence, is primarily the reason for its continued existence. Regarding the former, the prospects for the long-term survival of an art magazine in Greece are extremely slim, taking into consideration what we have already mentioned concerning earlier attempts and the economic slump. As far as the latter— and most important issue—is concerned, it lies in our personal dynamic and the collective dynamic of the Greek art scene, the overall proposition and the attitude that shapes an art magazine and in the achievement of an audacious, new approach to perception, dialogue, and criticism.

Visit the kaput. website, www.kaput.gr, where all three issues are available (May, August, and November 2008) and stay tuned for the February 2009 one.

I’ll check up on you!