EXCLUSIVE: Jenny Holzer discusses her difficult relationship to writing during the installation of the exhibition PROTECT PROTECT at the Museum of Contemporary Art, Chicago. Featured works include Red Yellow Looming (2004), Lustmord (2007), Protect Protect deep purple (2007), and For Chicago (2008), among others. The exhibition remains on view in Chicago through February 1st, and will travel to the Whitney Museum of American Art, New York in March.

Whether questioning consumerist impulses, describing torture, or lamenting death and disease, Jenny Holzer’s use of language provokes a response in the viewer. While her subversive work often blends in among advertisements in public space, its arresting content violates expectations. Holzer’s texts—such as the aphorisms “abuse of power comes as no surprise” and “protect me from what I want”—have appeared on posters and condoms, and as electronic LED signs and projections of xenon light. Holzer’s recent use of text ranges from silk-screened paintings of declassified government memoranda detailing prisoner abuse, to poetry and prose in a 65-foot wide wall of light in the lobby of 7 World Trade Center, New York.

The exhibition PROTECT PROTECT is curated by Elizabeth Smith, James W. Alsdorf Chief Curator and Deputy Director for Programs at the MCA. In a two-part interview, Smith lends us her thoughts on the exhibition:

ELIZABETH SMITH: Jenny Holzer’s work, of course, is very political, although she does not want to be defined as a political artist.

I’m particularly interested in this whole notion of how you define political art today. How does it differ from earlier incarnations? What is the most effective way to create art that has a political message? Jenny has talked about how she likes her art to be socially useful, which I think is a very interesting and appropriate way to talk about the idea of political and social engagement in art.

ART21: Of all the shows you must be planning, how did you know this was the time to do a show with Jenny Holzer? Was it intentional on your part to have this show on view in time for the 2008 presidential election and inauguration?

SMITH: That’s a great question. Jenny is someone whose work I’ve known for a long time and someone I think that many of us have been familiar with for a while.  And I have to say…I wasn’t thinking a lot about Jenny’s work during the past few years. But it all changed for me when I saw a show of her silkscreens at Cheim & Reid in New York. I was really struck by the fact that she was moving in this direction and that she was engaging with political material that she, herself, did not write, but had selected from these very interesting sources.

At the same time, we also have some work in the MCA Chicago’s permanent collection by Jenny Holzer…some early pieces that are fairly regularly placed on public view. I had begun to notice how visitors to the museum were really riveted by her small LED pieces. I, myself, would stand there and read the messages and take them in and think about them. They seemed newly fresh and relevant to me. And I noticed that that was also the effect they seemed to have on a number of our visitors to the museum. So it just felt right. I just really trusted my tuition that this would be an important moment to work with Jenny, even though I had never met her.

Jenny and I have been working together and talking about the show for about two years now. When we first began to discuss it, we weren’t quite sure how long it would take for her to develop her ideas into an exhibition. But as the content became clearer and the project that she wanted to develop became more defined, we knew it was going to focus on the recent work and have a more politically engaged slant.

As far as the people who were running for office in the 2008 elections…that was, of course, totally unknown and unforeseen. But we’re glad that Chicago turned out to be the seat of a lot of excitement related to current events. It wasn’t exactly intentional to have the show PROTECT PROTECT (2008-09) on view at this time, but we were very fortunate that Jenny was able to work with us to develop a show that could be presented at this historical moment and when we had an open slot on our schedule. ART21: In one gallery you’ve paired an LED work with a table of bones — how did that striking juxtaposition come about?

SMITH: It was really Jenny’s choice to put those two pieces — Lustmord (1993-94) and Red Yellow Looming (2004) — in the same room. And now that I’ve seen how they’re installed and presented, and how they work together, I think it’s a very interesting choice. One is a cool, technological, large-scale element. The other sculptures are much more intimate, closer in scale to the human body, and are much more visceral.

She chose to include the bone tables from Lustmord because they had to do so profoundly with the experience of war. It was really the first body of writing accompanied by physical objects that dealt really directly with the horror of war and with the bodily trauma experienced people — primarily women — who were the victims of incredible violence during the Bosnian War in the former Yugoslavia.

So in this pairing we’re looking at the period in the early 1990s — Lustmord — and the years of the first Gulf War in Iraq — Red Yellow Looming — and I think that she felt that including these two works give the overall exhibition something of a historical background. These two works don’t focus just on the present moment; rather, they provide some history over a decade or period of fifteen years.

Jenny’s work is very timely and topical, but she also wants to be making a universal statement about war. So I think it’s rather important that she’s chosen to include pieces that make reference to wars in recent memory and not to just focus on the present moment.

ART21: Could you say a little bit about the newest work, For Chicago (2008). Is it a site specific piece?

SMITH: For Chicago is a newly created piece that the museum commissioned for our collection. It came about, in part, because I was first talking with Jenny about the idea of doing a retrospective.  And she fairly quickly convinced me that that really wasn’t the right way to go, because so much of her earlier work involved the presence of texts in public space. So much of it was work that you couldn’t recreate in a conventional museum/exhibition format. Instead, what we agreed on was to present a retrospective of all of her writings. So her texts from 1977 through 2001 — when she stopped writing her own material — are all programmed into the piece For Chicago.

It’s a really significant work from that standpoint, because it presents so much information, so much material. It’s an LED sculpture, but it’s monumental in scale and it can be configured in different ways. We’re representing it on the floor of the gallery in the exhibition PROTECT PROTECT, but it can be positioned on the wall. It could be configured as one long line, going around a huge space. Some people might choose to put it on the ceiling. It has a lot of flexibility as a form, but it also has this amazing content that covers the entire early part of her career. 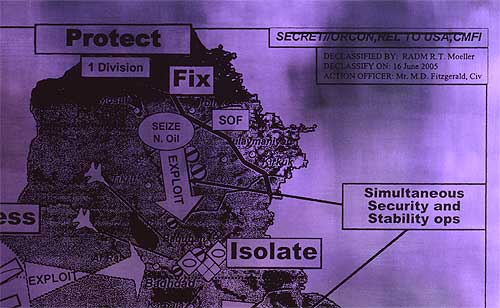 ART21: We filmed one of Holzer’s first exhibitions of paintings back in 2006 for the Art in the Twenty-First Century television series on PBS. How do these new works fit in with the series and with this exhibition?

SMITH: In the exhibition, Jenny’s presenting a series of paintings based on a PowerPoint presentation that was given by the Pentagon to the White House, prior to the invasion of Iraq in 2003. The PowerPoint shows a group of maps of Iraq that are emblazoned with various phrases that make evident the Pentagon’s strategies.

One of the pieces has the words ‘Protect, Protect, Protect’ in three different zones (which inspired the title for the exhibition). And then it also contains language like ‘Seize,’ ‘Exploit,’ ‘Shock & Awe.’ It really makes you realize the agenda that was being set in place. And once you realize what you’re looking at — a PowerPoint proposal for what to do — it’s quite extraordinary.

It’s incredibly important information that she’s presenting to us. And although we all have access to these primary documents that Jenny has gathered from the website of the National Security Archive, the way that she presents it underscores the message so powerfully. She blows the documents up to a very large scale, and so they’re quite monumental. And then she’s colored each one of them differently.  They’re all in hues of purple or grayish-green. Her idea was to make reference to the color of deep bruises on human flesh. A very powerful suggestion comes forth from those colors. At the same time the colors have a beauty, a kind of lyrical quality.

They’re alternately seductive and repulsive, and act on you in a profoundly physical way. It’s a great example in her work, I think, of how so much of her work is based on the act of reading. The forms in which she communicates the information are really meaningful in how we interpret it, how we take it in, and how it makes us feel. And I think that element of feeling and emotion is important to consider in Jenny Holzer’s work.