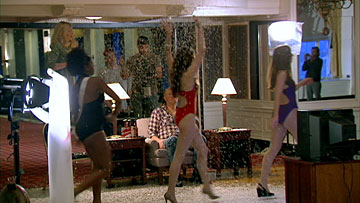 Producing the Art:21 series feels a lot like creating a work of art. One of the big revelations in working on the series is the tremendous amount of detail, planning, and collaboration often involved in making art. While some of the artists we’ve profiled work primarily alone in the quiet intimacy of their studio, many others (especially in Season 5!) work on projects that can involve a cast of dozens or more, including not just the artists but also studio assistants, fabricators, and exhibition space personnel – all of whom can play an important role in creating the final work.

At Art21, our core production team consists of only 5 members of our full-time staff but to make the series, we work closely with a broader team that includes our consulting directors, editors, crews, and post-production personnel, with whom we have worked with for many years. Perhaps the most important collaboration, however, is with the artists themselves.  Rather than try to impose a pre-determined structure onto the artists’ segments, we work hard to determine a story and approach that works for them.

So the starting point to our production process is always a conversation with the artists we are profiling. In an ideal world, we would love to film each artist over many weeks, and even the months or years that artworks sometimes take to complete. However, given our limited resources as a nonprofit, we have to plan our shoots judiciously, so the next step is to get more details from the artists about their upcoming schedule. While we are often told that our segments feel very in-depth, we typically film only a few days with each artist – sometimes as little as 1-2 days, and rarely more than 5.  The key is to use those days to capture their story, which can include the making of a specific work, a special installation, the rhythm of the studio, the role of their collaborators, or a broader overview of their ideas and methods over time. Paul McCarthy and assistants in his Los Angeles studio

The tricky part is determining which are the best days for us to film. With some artists, there is a huge hum of activity in the studio at all times. For example, with Paul McCarthy, we basically found a time that the studio could accommodate our crew and once there, we let our cameras roll as a seemingly endless stream of activity took place all around. Likewise, our visit to Doris Salcedo’s Bogota studio involved a witnessing of an ongoing process, a way of life among a committed group of people working together to collectively create art. Filming on-site installations or key moments in the production of a specific artwork can be more challenging since our goal is to film at the moment when an artwork or installation is far enough along that viewers can start to get a sense of what it will become. But we don’t want it to be so far along as to be nearly done, since we still want to reveal to our viewers the hidden alchemy of the process – that moment when the work starts to come together and its inner logic begins to shine through.

Pinpointing that moment in advance is hard when there are many wild cards that can change the schedule, while logistics require us to book crew/travel/equipment for set times (though we often try to stay as flexible as possible). To determine the right moment to film the Versailles gardeners working on Koons’s Split Rocker, we had extensive discussions about the gardening process, the artist’s schedule, and even the weather, to choose a day when we could still see the sculpture’s structural underpinnings (invisible once it was complete) but could also begin to see the distinctive color scheme of the work taking shape. When planning our shoot of Allan McCollum’s Drawings installation in São Paolo, we were in close contact with the artist and his assistants to figure out what would happen when. Ultimately, we sent our Brazilian-based crew out for 3 half-day shoots to capture the various phases and amazing amount of methodical labor required by McCollum and his team to put together a work of 1800 individually framed drawings on sixty tables. And when Carrie Mae Weems told us about her still-evolving plans to make a film featuring Barack Obama, John McCain, and a bevy of Miss Alaska contestants in swimsuits including Sarah Palin, we made sure to plan our visit to her Syracuse studio to coincide with that (whatever stage it was at!), and we serendipitously were able to film sequences from the making of that film. While we maintain a documentarian’s distance when it comes to the edit room (where the artists are not involved), we always allow artists to let us know, during filming, if there is material they want to consider “off the record.” As Series Producer, I’ve been with Art21 since its inception, and while the overall format of the artists’ segments has remained fairly consistent throughout its five seasons to date, I’ve been amazed by how different each segment has been — a testimony, I think, to Art21’s sensitivity to what is an inherently organic process, shaped in large part by the particular artists we work with, who are themselves an extremely diverse group.

There is a sense of exhilaration in the final hours of post-production, when we see the final shows coming together after so much time and effort. In watching the programs, I often feel a sense of kinship to the many people we see on screen, working so hard to make the art featured in our shows. Like the small army of assistants in the Koons studio, the dedicated team of Cao Fei building her Second Life projects, the tightly knit group of architects and artists in Doris Salcedo’s studio, the slew of collaborators working with Julie Mehretu in Berlin, and many others featured in Season 5 and in past seasons, Art21 is the product of many talented and devoted people to whom we are deeply grateful.