Letter from London: Dearth in Venice 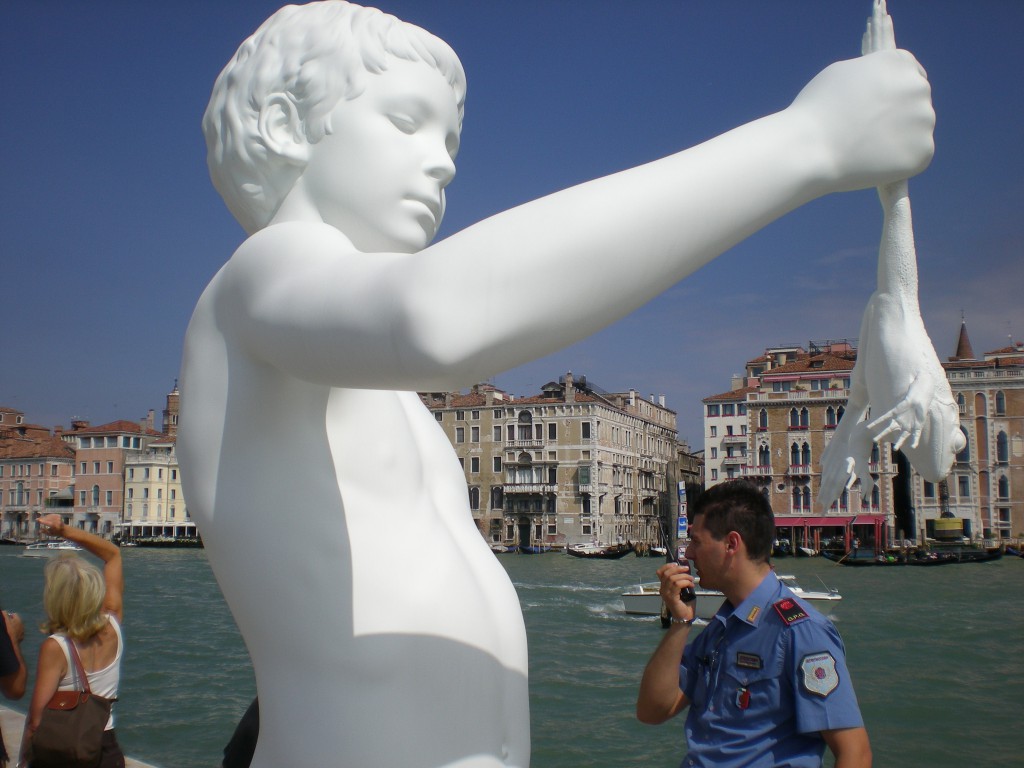 There’s a school of thought that claims that any large-scale survey of art conducted in any year in history will have its share of peaks and troughs, but holding the world’s largest contemporary art survey in Venice gives the lie to that idea, somewhat. Slipping into a church like San Zaccaria, which I did after the onslaught of the national pavilions and the Arsenale, provided a corrective to that idea in the form of Giovanni Bellini’s altarpiece, made about 500 years ago. No, it wouldn’t have been the same.

Herein lies the danger of showing contemporary art in Venice. The magisterial presence of literally hundreds of architectural and artistic masterpieces has a breathing-down-the-neck quality that sends otherwise sensible artists a bit loopy. The vast medieval hall of the Arsenale, which is longer than 5000 tennis courts laid end-to-end, either swamps smaller works or forces artists’ hands in creating huger artistic gambits than they’d do otherwise. Hence the almost total absence of painting in the Arsenale (curated by Daniel Birnbaum) and the preponderance of big film projections, sprawling messy installations, and theatrical light effects. As though second-guessing the inevitable fatigue of the visitor, the show peters out towards the end, sinking in the metaphorical mud in a series of plops and bubbles appropriate for the city sinking into the lagoon (too easy?).

Invariably and problematically (to use a favored Biennale word), the overabundance of stuff means that memorability becomes the litmus test. If it’s not still in your mind by the time you’re being doused in Perrier by a squadron of nude dwarves, or whatever it is they do at the openings (I think my invite got lost in the post, probably), then it hasn’t worked. This is unavoidable in a image-mad culture such as ours which privileges quantity over depth; it means that the Arsenale becomes an impatient channel surf through the last ten years of artmaking, rarely settling on one thing for long. That’s great for the opening, when a hasty whip-through is all the heat or paucity of cocktails will allow, but it makes for a thin viewing experience thereafter.

Having said that, there are a number of stand-out works, especially Paul Chan’s terrifying and hilarious Sade for Sade’s Sake, a projection of silhouetted figures conducting Sadean activities unmentionable on an educational website such as this one, which sees Chan step away from the wistful whimsy of Seven Lights and back to the jerky misanthropy that made his early work so compelling. Jorge Otero-Pailos hangs a huge latex imprint of a wall of the Ducal Palace, which has collected dust and pollution for years, creating both a palimpsest of time and motion and a frozen moment in a city in a state of perpetual entropy, like a skin sample preserved for future cloning. And venerable arte povera maestro Michelangelo Pistoletto has hung big gilt-framed mirrors around three walls of the second room and smashed them; some have big gaping fissures in them, others just a couple of spidery holes. While this is almost one of those you-had-to-be-there performance residuals beloved of art insiders, it makes sense as an after-the-fact installation, a memory of violent action relevant to the city itself (particularly in the Arsenale, its defunct naval factories) and a kind of furious self-portrait—Pistoletto taking a wrecking ball to the elegant mirrored surfaces of the works which made him. As Roger Moore would say, it’s simply smashing.

Many of the other works in the Arsenale play out established themes of translation, relational aesthetics, and globalized identity in an orthodox Biennale aesthetic that could be transposed to any of the hundred-odd Biennales that take place all over the world. If we are indeed living in a world without borders, where national identity is no longer relevant, as they keep telling us—which is an easy thing to say when you’re a globetrotting curator or art consultant, but might not be something shared by the vast majority of people, especially in a financial crisis—then the effect on art production looks like a negative one, on the basis of many of the works here. Too much art in the Biennale and national pavilions draws on a limited reading-list of 60s and 70s conceptualism, with Haacke, Graham, Buren, et al, as the new canon. This narrow thinking looks second-rate alongside the better national pavilions. The US pavilion plays it safe with Bruce Nauman (and after Ed Ruscha and Felix Gonzalez-Torres, isn’t it time for a little risky business?), but the works have such a reach and intensity that you leave dazed as though punched in the gut. Mark Lewis, in the ever-dependable Canadian pavilion, provides a kind of antidote to the overabundance of ponderous video art in the rest of the Biennale, showing four filmed scenarios that explore cinematic devices—pans, aerial views, documentary distancing—in a testing of the weight of visual gestures somewhat akin to Nauman’s probing of language. Both are didactic without being dry, which can’t be said for the two British entries in the pavilions, Liam Gillick in the German pavilion and Steve McQueen in the British pavilion. McQueen has produced a twin-screen, wordless film of the Napoleonic gardens that house the pavilions in their overgrown off-season; greyhounds out of Carpaccio scamper about, two characters embrace in the twilight, and the camera follows scuttling bugs and drops of water falling off leaves. I’m sure that many would describe the film (entitled Giardini) as being full of wistful imagery, beautiful melancholy light, and crumbling elegance but you don’t need McQueen to show you that. You need Venice. And eyes.

The abiding image of this year’s Biennale stands at the tip of the medieval Punta della Dogana, the customs house at the mouth of the Grand Canal that has been transformed into the second huge space to house the collection of François Pinault (after Palazzo Grassi, the other side of the Grand Canal). Pinault has enlisted some top-level international curators to install his collection in its wedge-shaped new home, redesigned with some elegance but not a lot of surprises by Tadao Ando. Pinault’s collection is exactly what you’d expect to see in a billionaire’s art collection: Koons, Sherman, Kelley, Twombly, Tuymans, and Gober—all represented by strong but predictable work, much of the pleasure of which is in recognizing it from art books.

The most interesting admission is the under-shown and always-interesting Charles Ray, whose Boy with Frog, a larger-than-life sculpture of a 12-year-old boy in gleaming white marble-effect fiberglass, provides the Biennale’s magnetic pole and troubling icon. The sculpture’s classical connotations are something of a red herring, just as the façades of Palladio’s two churches (San Giorgio Maggiore and Il Redentore), against which Ray’s work is silhouetted and which pick up on its dazzling whiteness, are residues of an alternative art tradition that sits uneasily in Venice. The boy ponders a frog he holds dangling by one leg, surveying it with the mixture of curiosity and cruelty characteristic of the adolescent discovery of power over smaller, weaker things. Paradoxically dwarfed by its own scale, the boy teeters between child- and manhood, holding life and death in a fist. Ray’s return of the real, his affirmation of the uncertain, feels like the beginning of something. And, this being Venice, the end.