Open Enrollment: The Considerable Goodness of Being Led Astray

I found my way into graduate school because I believed it would be something I would enjoy. On nights like this, when I look at my calendar and realize that I’m booked until August with assignments due, books to read, and people to impress, I begin to have doubts. But I can’t complain. This is what I asked for.

It has been a long process to get here. In my first attempt, I applied to seven writing programs and promptly received seven rejections. I moped around for weeks, further insulted at work because my duties included sending out acceptance letters to prospective law school students.

I was determined to try again. But while revising my essays for the next attempt, I realized I gushed a lot about how visual artists, not writers, influenced me. I fully quoted the late Javanese artist Affandi in an attempt to explain why I do what I do.

We call it “Panggilan Jiwa – the calling of the soul.”[sic] Whether I get a name or not, whether my painting is sold or not, really does not matter. To do the painting is the thing. I have to do it.  — Affandi

Understanding that my writing was only part of my work was an important step. When I finally did enroll into graduate school, at NYU Gallatin, it was under the impression I would work towards a thesis in multimedia art. But there was a problem. I fell in love with another program. Around that time, I heard about a crazy floor of the Tisch building where people build wooden mirrors and umbrellas that politely bend so they wouldn’t hit passerbys.

I knew the Interactive Telecommunications Program (ITP) was a better fit, but I learned about it too late. Then I took several courses there, including one with my current advisor, Marina Zurkow, and was completely blown away. The teachers at ITP knew what they were doing and the students had real passion and creative energy. I realized I was really missing out. So I applied, four months past the deadline.

I knew I wouldn’t get in just by applying. It was simply too late. Having worked in academia, watching student upon student beg professors for higher grades, I realize it’s much harder to say no to someone once you meet them in person. So I was determined to meet with the director of the program to put a face to my name.

In 1979, armed with a Sony Portapak and a fiery determination, Red Burns gave birth to a hybrid of an interactive technology and new media art program. Her tenet, that creative freedom leads to innovation, made her one of the most influential figures in the world of tech today. She is also one tough cookie.

I sent her an email gushing about how amazing she was, a woman holding her own against the chauvinist culture of computer geeks, artists, and businessmen. She replied with one line: call her assistant and set up an appointment.

I arrived early, but she wasn’t there. No one seemed to know where Red Burns was. Finally, this woman barely five feet tall with bright red hair wearing a subdued green pea coat hustled past me. Her assistant let me in the office fifteen minutes later. Red Burns casually nodded at the seat next to her. I sat down next to stacks and stacks of fresh printouts. The computer screen behind her popped out screen-fulls of new emails after every refresh.

“Tell me why you’re here,” she said. My application and portfolio was in her hand. She was flipping through it and did not look up once.

“I want to transfer in,” I told her. I went through the lines I rehearsed. Where I went to school. My dreams. My reality.

“Do you know Karen Finley teaches at Tisch?” she asked. “You should look her up.”

I nodded, slightly confused at the tangent. Straying from the topic is one of Red Burns’s specialty.

“Tell me why I should let you in,” she said.

“Because I’m always on time,” I lied. She cracked a smile.

“Do you have any experience with labs?”

I mentioned my experience at the hospital, looking for new treatments of visual disabilities by shocking stroke patients behind the ears. Red Burns stared at me dumbfounded and unimpressed.

“Get out of this office,” she said. “Walk forward, make a right then another right. Come back and tell me what you see.”

I did. At the time, I was reading Herman Melville’s Moby Dick, or, the Whale. I was reminded of the part where Ishmael explained to Captain Peleg he wanted to go on a whaling ship in order to see the world. Captain Peleg told Ishmael to look over the bow of the ship and tell him what he saw. I went back to Red’s office.

“I saw a room full of students soldering and working on microcontrollers,” I told her. “There is a wall of blue bins filled with unfinished projects, and a wood shop that I couldn’t get into without a pair of safety goggles.”

“Ishmael saw ‘nothing but water; considerable horizon though.’ And that’s what the world is, no matter where you go.”

Red Burns went quiet. “Well,” she said. “You’re going to have to get a pair of safety glasses.” And that was that. 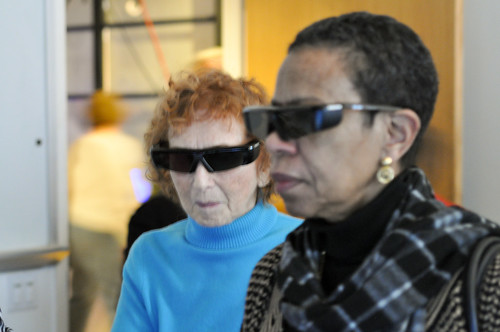