Inside the Artist’s Studio | Juozas Cernius Juozas Cernius is a Canadian visual artist based in Toronto. He has received his MFA from the School of the Art Institute of Chicago (2004) and his BFA from Concordia University in Montreal (2002). Juozas has worked in numerous media and has exhibited drawings, paintings, prints, photographs, and sculptures in both Canada and the United States. He has shown at Allen Gallery, at Denise Bibro, and at the Dumbo Arts Center, among other exhibition spaces.

Having said all of the above, the reason for this post is Juozas’s most recent enlightening realization that art, opportunities, life, and the world do not end in Manhattan. You see, it all started when one day, waking up in New York for the 7th consecutive year as a legal alien stopped making sense.  In 2010, time came to renew his visa again – Juozas had tenaciously pursued an art career and life in New York until Truman Burbank’s spirit took him over for good this time. He packed his camera bag and got on a plane to a journey of discovery, which lasted over 200 days starting on December 1, 2010. Juozas visited more than 53 towns and cities in Egypt, Sudan, Ethiopia, Kenya, Swaziland, and South Africa. Last month, he returned to Toronto with a vast body of work of over 12.500 photographs. I admire and stand behind any artist who willingly detaches himself from art labels.  His creative reservoir is filled, his memory cards packed, his spirit intact, and he has health insurance.  I only expect to see great things from him in the future and for that reason, I am introducing you to Juozas Cernius this month.

Georgia Kotretsos: You’ve packed your bags and went away in the past.  Do you follow your subject on each trip or are you fulfilling your personal need and curiosity to be on a journey acquainting yourself with parts of the world outside your immediate comfort zone? Juozas Cernius: There’s something very invigorating about packing up and heading out, but returns are an important part of the equation. I was born and raised in London, Ontario, and as a teenager it was like being in a house on fire. I had a strong impulse to explore beyond the relative comforts and conservativism of my provincial town – and after some time in Montreal, my home concept ended up being tugged between my old familiar turf and the current residence. I’ve continued living in several cities fostering a somewhat nomadic, autobiographical route, exploring the ideas of going forward, looking back, and creating reference points as a form of navigation for any project I take on.

After living and going to school in Montreal and Chicago, I lived in Brooklyn for six years. With the expansiveness of New York City as my own back yard, it became habitual to visit different neighborhoods with my camera so long as the subway or my feet could take me there. I covered a lot of ground from Washington Heights to Coney Island, and through all the protests, parades and marathons I found amazing visual stories when I was willing to override my natural shyness and get in there.

I quickly expanded on my curiosity with more diligent research and planning, and widened my geographical range. My projects became as varied as going southwest into the remote stretches of Utah and northeast to the rural fishing villages of Newfoundland. I found my subjects initially by intrigue or impression and a sense that I could piece together a larger narrative. Being organized was helpful, but my openness to spontaneity has never disappeared. It’s a process of not knowing, subsequent discovery and adventure, and I’m completely hooked. GK: By looking at your most recent body of work and knowing your personality and energy, it’s remarkable how at times you become invisible or you blend in with your subject to the point where you become part of the photograph.  Neither your photos nor your presence is invasive.  How do you go unnoticed or become accepted or trusted with a camera lens in hand? JC: To me, a good photo starts with an equal meeting between the artist and the subject — I just happen to be on the other side of the lens. I don’t aim to neutralize my influence or to be invisible, but I do try to be discreet while responding with my own instincts. 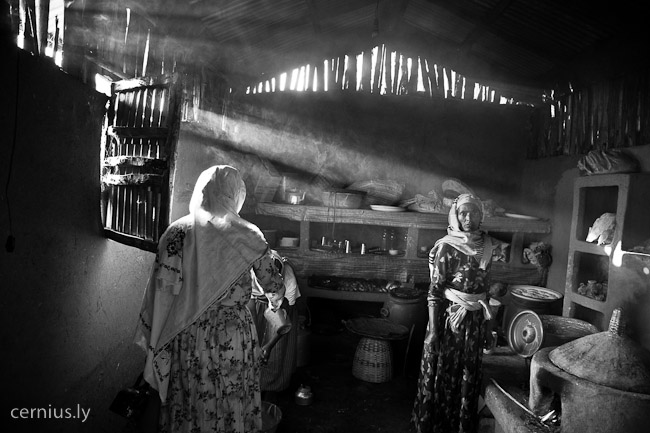 The size of the camera matters less than, say, me being 6 feet tall and trying to squeeze into the opening of a thatch hut of the Bena people in South Omo, Ethiopia, and sitting around the fire pit with a group of tribal folk and having to politely refuse their fermented beverage because I’d likely get sick if I drank it. The women tell some jokes about my pointy white nose, and the kids are curious why my hair is brown and straight and not black and curly. So my presence is very obvious but people tend to relax after a short while, and in that time, I observe as much as I can and prepare to pull the camera out when it’ll be the least intrusive. Language is also a barrier I had to adapt to on a regular basis. In Egypt and Sudan, I learned to communicate with friendly gestures and only a handful of Arabic words. I feel the best photos I have of people depict the universal recognition of eye contact. That connection speaks when language fails, and as much as it helps me in the moment and across cultural divides, it also helps the picture in the end. Every situation is unique and needs to be handled as such, but in general, I want my subjects to be themselves and not feel awkward by any expectation I might have of them. GK: Going through your photos, an individual with a sharp pair of eyes could, thematically or otherwise, organize this body of work and plan different strategies for its exposure spanning from an essay book to an exhibition, magazines, and much more.  That individual can be a writer, a curator, an art advisor, a photo agent, an editor. I’m sure you get the idea and as you understand, I can exhaust this hypothetical scenario but I’m interested in hearing from you what you’re planning on doing with this work. JC: I did travel for 200 days in Africa and took thousands of photographs of everything from schoolkids, markets, and waterfalls to religious ceremonies, automobiles, and endangered species, but I do not think of this material as travel genre photography. This work is about how and what I see and extends from my peripatetic art practice. I learn to adapt my creative energy where I’m given lots of unexpected psychological and physical challenges, such as the manipulative hassles courtesy of the Sudanese police or the choking dust and baking heat of sub-Saharan Africa. Such difficulties and inconveniences, as frequent as they occur in many regions, are not the focus of my work. Getting through them, however, does sweeten the rewards of traveling this amazing planet. In what seems the most unlikely of places, I have found deep riches of beauty and humanism. In some ways, my work shares similar parameters set up for a performance that can have no single finished product representing a chain of ephemeral experiences. My photos are part of that record-keeping tradition of photography, but as they are subjective negotiations between myself and my environment, they also carry their own weight as works of art.

I’m very excited about this recent work and intend to publish it in ways that will share my experiences, impressions, and thoughts with a larger audience. I’m now in the process of negotiating for book publishing and fine art exhibition of individual prints. GK: Did 6 months on the road change you in any way?

JC: I’ve met people who thought begging from me would make them better off. I’ve also met individuals who thought stealing from me would prove some advantage. I’ve been considered a good prospect for religious conversion and at other times, good company for dinner and drinks. There were many people happy just to say hello, and others who invited me to share in celebrating a wedding. I’ve seen the bitter rancor of argument and fighting, as well as the great belly laughs of local jokers. I’ve seen the workings of government kleptocracy and local individuals changing things by good example. So yes, all this changed me because it so frequently reminded me of home.

GK: What are your short- and long-term plans back in Canada?

JC: After eight years away, I’m reacquainting myself with Canada, and Toronto in particular. It feels like a new city to me, flush with opportunities and energy. I’m scheduling meetings and getting around, even though I don’t yet have my own apartment. I’d say the short term goal is to get settled in a bit socially and professionally. A longer view for me is to have Toronto as the base from which to pursue my art projects in this country and internationally.