In 2008, when Eli Broad opened his big, brazen inaugural BCAM show on the Los Angeles County Museum’s Campus, Barbara Kruger (Season 1) was shafted, stuck accenting an elevator while all the boys—Rauschenberg, Twombly, Koons—strutted in main galleries. Not only that; the elevator that traveled up and down the shaft plastered with Kruger’s bold red, white, and black graphics was faulty. It had been faltering before the exhibition even opened, and then, a few months in, the museum shut it down altogether to stop it from stalling. Finally, in June, it reopened with a new piston.

Beady eyes crown Kruger’s 86-foot tall Untitled (Shaft), and then a string of consumer products spelled out in white capital letters descend: MOISTURIZER, COMPUTER, SNEAKERS, SWEATERS. “Plenty should be enough—right?” reads the red strip in the middle, and text on the side explains, “This work is about the frame and the confines…, the edge and a peripheral locator.” Located on peripheries, Kruger’s brazen bright epitaphs shine brightest—in Art21’s first season, she wasn’t featured in a conventional segment but instead popped in and out smartly between clips. In the shaft, her one-liners have punch, and she soars as the reformed copywriter that she is, an artist who knows how to catch your eye in the instant. But there’s never been much meatiness or ambiguity to her message. At L&M Gallery in Venice, Kruger just debuted a new exhibition, her first in an L.A. gallery in twenty-seven years. “I don’t exactly have a Santa’s-workshop mode of production” but “I felt it was time to do a gallery exhibition of my video installation The Globe Shrinks and a room wrap,” the artist told ArtForum in mid-May.  The room wrap, all in black and white and tight and cleverly installed, says things like “A RICH MAN’S JOKES ARE ALWAYS FUNNY” and “MONEY IS LIKE SHIT. YOU ONLY FEEL IT WHEN IT MOVES.” True perhaps, but not mind-boggling. In the opposite gallery, again cleverly installed and projected on four galleries at once, the video The Globe Shrinks reductively critiques bigotry (one man pushes another off a bridge because he doesn’t belong to the right subsection of a religious denomination), usery (an artist explains his manipulative practice) and cluelessness (a woman on her cellphone swerves on a highway). 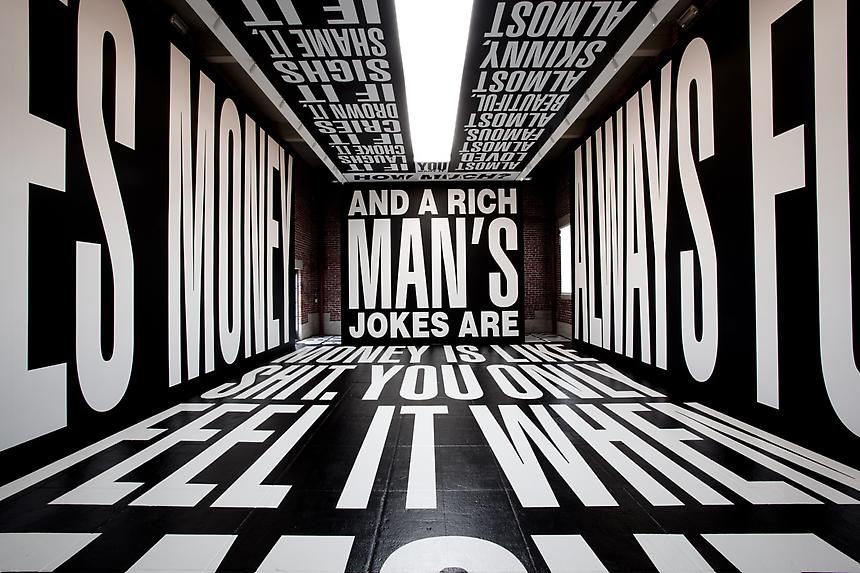 Kruger’s been called a “poet laureate” in the age of spectacle, “like the Dadaists of the early 20th century.” But as Kruger told design podcaster Debbie Millman in 2007, “No work whether…is ever as brilliant, major and extraordinary  or as thwarted, failed and minor as it’s written to be.” She’s right, and there’s nothing wrong with living in between. She may just be the best-ever elevator artist, someone who utters the spot-on, not-so-staggering sentiment in just the right eye-catching way then leaves you to move on with your life.