Inside the Artist’s Studio | Serkan Özkaya Serkan Özkaya is a contemporary conceptual artist based in Istanbul, Turkey, and New York City. His work deals with topics of appropriation and reproduction and it typically operates outside of traditional art spaces. He holds an M.F.A. from Bard College, New York, and a Ph.D in German Language and Literature from Istanbul University, where he also earned his B.A. and M.A. Özkaya has been an artist-in-residence at the École Régionale des Beaux Arts de Nantes (2000–2001), Rooseum in Malmo with the IASPIS grant (2002), Platform Garanti Contemporary Art Center in Istanbul (2003–2004), and at Kunstlerhaus Bethanien, Berlin (2006). He has also been a fellow of the MacDowell Colony in New Hampshire. His work is represented by Slag Gallery, New York and Galeri Nev, Istanbul. Serkan Özkaya, "Today Could Be The Day Of Historical Importance," 2010. (The artist collaborated with newspapers across the globe to hand-draw the text and images of pages of their papers after they were laid out by the newspaper’s editors. The drawings were printed in place of the typeset pages, resulting in accessible, affordable, and unexpected works of art that were distributed to millions of people. The book includes discussions, interviews, and articles on the project, in addition to hundreds of color reproductions of all of Özkaya’s newspaper pages and photographs documenting his working process). 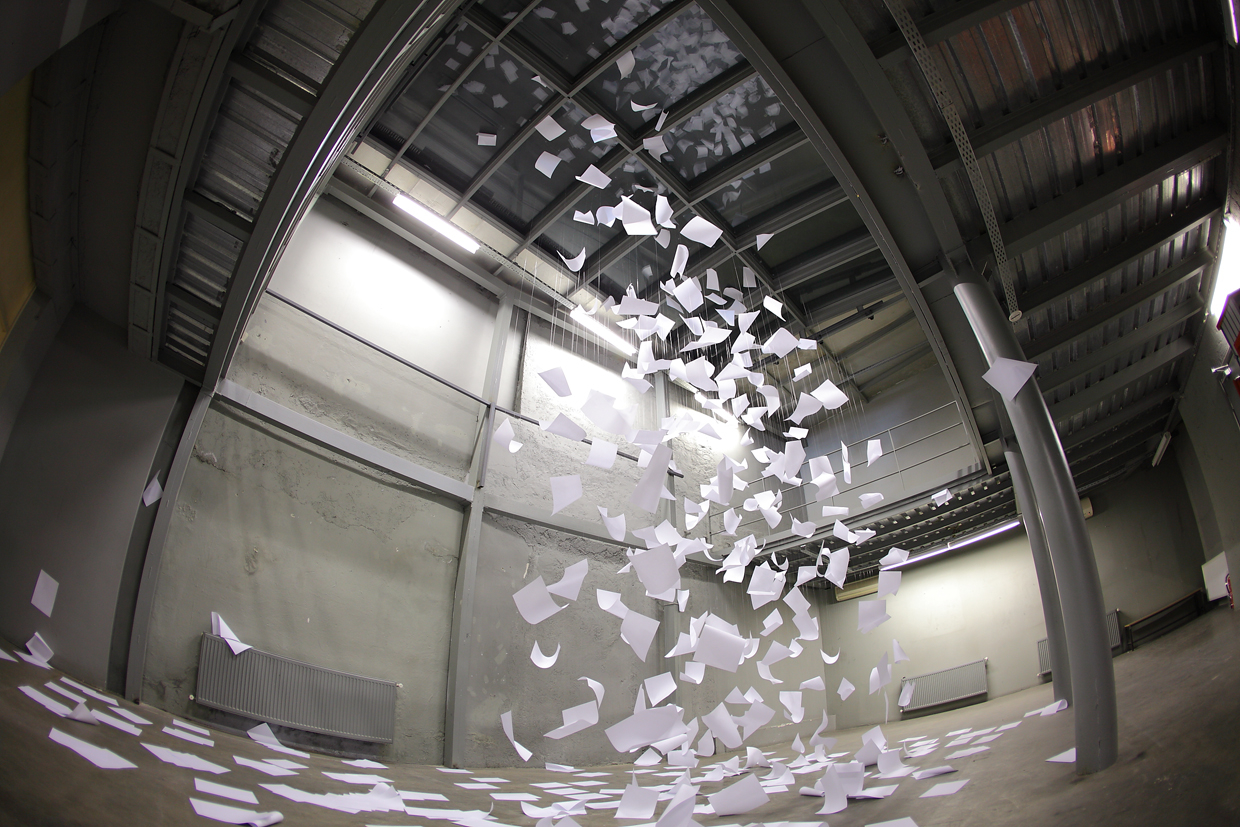 Georgia Kotretsos: I’ve often wondered about the internal process of artmaking, hoping to comprehend the force behind it. Is it a need ‘to make,’ to ‘share’ and ‘communicate,’ and so on and so forth? For sure, there isn’t a fixed answer and for that reason I would like to ask you why, for what reason, and for whom do you make art? Serkan Özkaya: You know what, so have I! Most of the time, the case is that we have dinner and drinks with my friends and the conversation develops and everybody becomes tipsy and this or that idea comes up and I won’t even know if it’s me or somebody else who brought it up, but the next day nobody else has a recollection of it but me.

As a matter of fact, I do think that only the person you’re talking to can utter your very ideas.

I sometimes think that ideas are like butterflies, as Feyerabend calls them. They circle around in the air and anyone with a seeing eye can see them and it’s just a matter of choice to decide to take the responsibility to execute and go for them. And then the artist is mostly an exhibitionist who wants to share or actually show them to others.

As for who those others are, I don’t have a clue. I’d say, “Me, myself, and a couple of friends,” and/or the whole world. I don’t know, really.

Last year when we were talking strategy with my music band, To Mexico with Love, the lead singer, Kapitan Sabor, said, “Our target group is: … err … Everybody!”

GK: Recently I shared with you a link by Milton Glaser on the fear of failure, where a number of great points were raised for our discussion. I’ll begin with the idea of the “art genius” or the “creative genius,” which, in recent years has been pushed into the background of this pretty art picture we’ve painted for ourselves and I fear it may have been replaced by the idea of the “art star.” How would you define the two models?

SÖ: Yeah, that guy looks like a lot of fun.

You know, I’ve written two books on this topic: Genius and Creativity in the Arts and Distance in the Arts. The first one was more about Schoenberg and his Moses, from his opera Moses and Aron, as his alter ego; i.e. Moses can hear God but can’t address people, so he needs Aron to voice him — and God. Schoenberg as the artist can see/hear ideas and he needs to translate them to e.g. music. And the second book argued that the work is a collaboration between the reader, the author, and the piece itself — sort of like Marcel Mauss’s famous example of the gift economy. Anyway to make a long story short, I think genius is the idea itself and the artist is a mere worker in service of it.

As for the art star and the system, I really couldn’t care less. I mean, I don’t mind the art star per se. I wouldn’t even mind succumbing to some of its advantages, like sex, drugs and rock n’ roll, but I don’t think it’s relevant or important.

GK: Continuing with the “Fear of Failure,” it’s a strange concept. As artists, we’re not encouraged to go ahead and make bold mistakes, cleanse our systems, FAIL (in capitals), and then sit across from this failure and learn from it. The symptoms of failure for the artist himself and the viewer of his so-called ‘failed’ work are two entirely different stories. How do we experience and how do we perceive failure?

And on the other hand, I think the same thought could be easily applied to success. How does an artist know he’s ready to handle and take on the heavy load of being successful? Is there such thing as the “Fear of Success,” and what kind of symptoms could it possibly have?

SÖ: I wish I knew the answer to the ‘success’ part of your question, but I don’t really. I mean what could it be? Money? Reputation? There is no satisfaction that can be matched by the joy of coming up with an idea and/or standing in front of a finished work. Then again, as said, I don’t think ideas can be owned; thus the finished work is an illusion. What else is there but nun est bibendum, nunc pede libero pulsanda tellus (Now is the time to drink, now the time to dance footloose upon the earth)! Although I’m an expert on the other part, a.k.a the failure. Remember when David (inspired by Michelangelo) fell down during its installation at the 9th International Istanbul Biennial years ago? Here is some praise on it:

“The spectacularly worst was Serkan Özkaya’s thirty-foot-tall golden replica of Michelangelo’s David, which fell over upon installation and broke into pieces.” (T.J.Demos, Artforum)

“a literal bump in the road” (Power Ekroth, Artforum)

“Özkaya’s David sacrificed itself and collapsed, upon understanding its distant meaninglessness and that it would never make any sense within the city.” (Umit Gezgin, Art&Life)

“As if to undo the Crusaders’ purloining, Özkaya brought a 29-foot-tall golden Styrofoam replica of Michelangelo’s David to Istanbul–only to witness the sculpture collapse during installation.” (Arden Reed, Los Angeles Times)

I sometimes think I’m over the fear of failure but it can be addictive, can it not? Spill the eggs… GK: The other day, I was on a panel and the terms “Greek Contemporary Art” or “Artists” were thrown generously around, as if we all understood the same thing every time these three words were spoken. At some point, I dosed off and I pictured a small convenience store where “Greek Contemporary Artists” all stood around waiting to be picked up. Do you also use the same umbrella term in Turkey — “Turkish Contemporary Artists”? Who falls under this category, or better, who’s eligible? What are your thoughts on identity labeling when it comes to our peculiar mobile art race?

SÖ: Yeah. That’s tricky, really. Or maybe it isn’t. I mean, one of the reasons I consider myself an artist is that I ran away from family, that is to say, from the institution that closes you up and makes you a part of something and makes you follow or contribute to its history as it were. Nationality smells the same to me, even worse. To be honest with you, I don’t think nationality, as a concept, is as big as it was before. Again, I don’t want to have much to do with it, but we all know that it makes things easy when it comes to [defining] identity. Although identity doesn’t mean much, it’s the work you’re doing. I know this isn’t really the answer you’re looking for, but but but… GK: Tell me a few things about IMOCC and the project you’re currently working on. Also, there is a film in the making about David — what is that all about?

“Nearly one year ago, New York artist Gorzo teamed up with galerist Irina Protopopescu to realize his project of a new museum; the chosen venue was to be what else but the artist’s overcoat to carry the exhibitions on New York streets. As a result of this collaboration, the International Museum of Contemporary Culture (hereafter IMOCC) was born.

When Gorzo approached artist Serkan Özkaya to have him host the first show at IMOCC, he did not know that Serkan Özkaya was planning to put a weight on his shoulders. After a few days of brainstorming, Özkaya came up with the idea of making “the museum” wander around the streets of New York with his new piece: a giant rock. Özkaya’s work is appropriately titled Atlas, and the artist declares that his primary inspiration was Schubert’s song of the same title, on a poem by Heine.

IMOCC director Protopopescu points out: “There will be a day that we are going to say that we all came from Gorzo’s overcoat,” jokingly referring to the famous Dostoyevsky quote about Gogol (“We all come from Gogol’s Overcoat).

As for IMOCC and Gorzo, only time –and unpredictable New York weather — will reveal if his Wanderlust will transform him from proud Atlas to a miserable Sisyphus.

IMOCC is now proud to present its first show, Atlas, and invites New Yorkers and art lovers everywhere to observe and join this veritable traveling exhibition.”

Oh right, the movie. Yes, with director Gabriel Wrye, we are working on a film on David and making a documentary. I mean, a movie on the making of a documentary about an art piece on art. I believe in the end it will be an epic of the three people (myself, Gabriel, and Heather) fucking up personal relationships while trying to figure out art and ideas. I don’t want to reveal the whole plan because it’s not finished yet; we don’t want to jinx it this time, do we?

SÖ: For music I go to my bedroom, where I recently put all my CDs. [I] pick one and come back to the living room, the studio, dining room, and kitchen, that is. I also go to concerts and the opera but my taste happens to be a little odd, I’m afraid. New York is almost the only place where I can find shows to my liking. Such as the wonderful Wozzeck I saw the other week at the Met, Yvonne Rainer’s new work at the Baryshnikov Center, a Meredith Monk performance at Poisson Rouge, a great performance by Shahzad Ismaily at the Stone, just to name a few.

For art, hmm. Galleries? Museums? Newspaper? I don’t know really. I like things that come to me actually. I really want to see a nice web project. I’m sick of graffiti.