Who says the coolest artistic moments of 2011 had to happen at Venice?  I sure don’t!  To say that I’m at my computer all the time is an understatement, so the following list reveals the most exciting artistic gems that made for some very sad and lonely evenings hitting replay for hours on end.  The magic and wonder (or haunting sign of the apocalypse) of the Internet is that everything is archived and we can watch it over and over and over and over again!  So, enjoy!

Roman Polanski has written and directed this new film based on the 2009 Tony Award-winning play, God of Carnage (written by Yasmina Reza, who also wrote the 1998 Tony Award-winning play Art).  In an era of Wikipedia and IMDB and knowing everything before the film’s release—like the story being set in Brooklyn but shot in Paris because Roman can’t enter the United States, and that the epic climax comes when Kate Winslet’s character vomits—makes it difficult for a trailer to entice.  But, the all-star cast, close quarters, and potential campy one-liners are a major recipe for awesomeness.

After the death of Kim Jong Il, this video became so much more important—scrub over to 1:15 and you’ll see what I’m talking about.  Justin Bieber as the pop icon of 2011 combined with a big year for the LGBT world (like the repeal of Don’t Ask Don’t Tell, same-sex marriage in New York, and Chaz Bono on Dancing With The Stars) all seam perfectly together in this fun song-and-dance.

"The Resurrection of Piss Christ," anonymous. 2011, from resurrectionofpisschrist.com.

This is the only non-moving entry in this year’s list, but its potential for going viral and its basic premise of being an online multiple situates it in a completely new media arena.  After Christian fundamentalists vandalized Andres Serrano’s Immersion (Piss Christ) on April 17 in France, an anonymous artist created this digital image to “demonstrate the futility of the attack on the work itself.”

Even though I just made fun of the 90’s, in all seriousness, it was the best decade ever, and one of the pop stars to still shine brightly is Robyn.  Her uber-popular single has an even more uber-popular video that is so hypnotizing, it reminds me of Yvonne Rainer’s Trio A, but you know, with music.  Just an artist, a room, and a dream….

5. Live-streaming of Christie’s The Collection of Elizabeth Taylor auction

There’s nothing like an evening at home, watching a man in a tux with a sexy accent counting in increments of $500,000.  With a final lot sale of $11,842,500, the bidding for Elizabeth Taylor’s ‘La Peregrina,’ a natural pearl, diamond, ruby, and cultured pearl necklace by Cartier, made for some interesting video on the Christie’s website.  I’ve never been to an auction, but I can only assume that the performance of “auction” was amped up just a little for this first-ever webcast.  Check out Christie’s website for some online video. 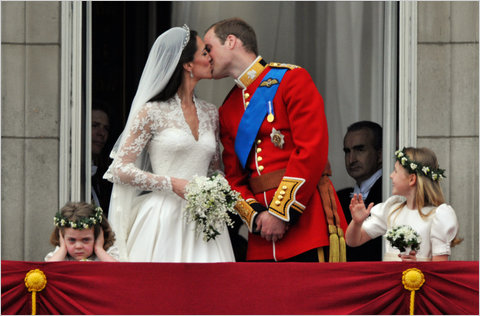 Google search for "The Royal Wedding," from nytimes.com.

Yes, we all saw it.  Yes, I stayed up into the wee hours of the morning to watch it.  Yes, I watched it three or five or eight more times.  Yes, the little girl in the viral image of The Royal Kiss is adorable.

Speaking of Elizabeth Taylor, here’s her contemporary pop version, Jennifer Lopez, promoting her fragrance Love & Light on the Home Shopping Network.  I practically died when I channel-surfed onto this.  If there were ever a collision of high and low, it was this evening.  This is the equivalent of Jeff Koons exhibiting work at a community pool—it just makes sense!

We live in a time when a sequence of images can construct universal narratives.  Themes of love, liberty, and the pursuit of addiction are so pronounced with the simplest of gestures here in one of the knockout songs and videos of 2011.  The flash of a slot machine screen, a mushroom cloud, a projection of a wheat field—nothing is new here, but the sequencing has seemed to hit the nerve of a lot of people.  Rihanna’s own identity as a victim of domestic violence provides a juicy confessional layer that suggests new media is truly a way of sharing personal information.

The breakout television drama of 2011 was the BBC’s Downton Abbey, scoring awards and nominations left and right.  I myself watched it nine million times while it was free on PBS’s website, but it is a spoof of the series that I thought I’d share.  After watching the miniseries so many times, it was such a hilarious gift to see this parody.  Short behind-the-scenes clips, confessionals that mock the writer Julian Fellowes, and scripted moments that attack the viewer’s obsession all add up to a great moral for any new media junky: get over yourself!  Scrub over to 2:39 and check out the inevitable joke on how to even pronounce the miniseries’ title.