This is the first January in a decade that I am not returning to a full time work schedule, and I am rediscovering the academic limbo that is winter break. Most schools will not reopen their doors to students until late in the month, and after spending nearly every day with something due the next one, I was feeling symptoms of withdrawal. As a creature of habit, I craved some structure. By stroke of luck, I managed to secure a teaching assistantship with Daniel Shiffman, the renowned guru of processing. He is teaching a two-week intensive course on programming and code-based art to a group of NYU Abu Dhabi undergraduates, and I get to sit in to occasionally help.

I am, by far, getting the better end of the bargain. I have taken two courses with Shiffman already, and his teaching style never ceases to amaze me. He takes on very difficult concepts on algorithms and programming and can explain them for both the experienced coder and the technophobic artist in one entertaining package. He is also one of the nicest people I have ever met, and one specific benefit of that is he has many talented friends. Two of them, Jer Thorp and Marius Watz, gave a guest lecture.

Although Watz and Thorp made their mark as artists who use code as their medium, they are moving towards new territory by using the very same digital tools to create work for the physical realm. Watz’s study of Victor Vasarely’s Op-Art, for example, have leapt from the screen and onto laser-cut plywood. And Thorp, who is well known as the New York Times’ Data Artist in Residence, has filled his Flickr stream with images of his latest work, a software loom that weaves patterns based on mathematical techniques. He plans to collaborate with a textile artist (his mother) to bring these creations to life. Shiffman splits the course into two parts. The first half is devoted entirely to the basics of object-oriented programming. But the second half, on simulating the systems of nature in software, is where he really shines. To better understand why it’s important to create digital worlds, he took us to the American Museum of Natural History. There, Senior Project Manager Stephen Quinn took us on a behind-the-scenes tour of conservators restoring the dioramas of the Hall of North American Mammals. Quinn has been working with the museum as an artist, exhibit designer and field naturalist since 1974. Dioramas were an attempt to recreate an authentic experience of nature in order to better understand and connect with it. Before the days of photography, these dioramas created a “virtual” sense of reality for generations of New Yorkers who did not have access to the natural world. Watching the artists, craftsmen and designers at work painstakingly restoring these historic works made me appreciate them even more. 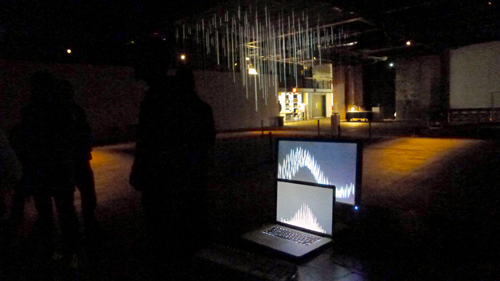 In order to see how digital tools are being used in a contemporary art setting, we met with ITP alum and Eyebeam resident Matt Parker to see his and his collaborator Albert Hwang’s 15-foot cubed volumetric sculpture, Lumarca. The system works whereby a projection of pixels are mapped onto yarn hung in a specific pattern. Through clever coding and planning, viewers are able to see three dimensional images and motion. There is poetry in the simplicity of the piece — yes it takes many hours to set up and tons of mental anguish to create. But the creation of such wonder using common materials and readily available tools is even more impressive.

I was also very giddy when I entered Eyebeam because Slava Balasanov, another Eyebeam resident and ITP alum, was exhibiting his works in the lobby. The first item on view was his and Corrie Van Sice’s anus chair — a project that I saw them create. Teaching can be hard, but I’m finding the virtues outweigh the difficulties. I get to review the basics, force myself to maintain good habits, and also discover the extent of my knowledge. I feel like I have found a new passion. Although it’s great to make swirling balls appear on computer screens, it’s even better when you teach novices how to do it, and see how their approach significantly changes the aesthetics and interaction of the piece.

The upcoming months will be a little uncertain for me. As I am finishing my graduate school experience, I have to face the reality of deciding what happens next. I will keep in mind what Jer Thorp shared with us in class. He didn’t set out to be the NY Times‘ Data Artist. He was doing what interested him, which was using the Times‘ data, and at some point people took notice of his work. Passion leads to opportunities. But then, there is also the responsibility of taking care of oneself. One metaphor I will carry with me is found in Dan Shiffman’s own work. When simulating natural occurrences of flocking, Shiffman notices the best behaviors are those that result from a conflict of rules. A flock of birds that need to stay cohesive but need to keep themselves separate from each other, for example, is more interesting than the ones who only follow one rule. It’s often good to have a little conflict.