Gimme Shelter | Power Games or Two at the Kitchen

What is a faygo shower?

If someone had asked me this before Neal Medlyn’s Wicked Clown Love premiered at the Kitchen February 2-4, my response would have been, “a fay-what? Sounds like a secret queer military hazing ritual.”

It is a ritual of sorts, but only for a certain population in America that defines itself as the Juggalos/ettes, followers of the Insane Clown Posse (ICP). Faygo is their adopted drink, and a faygo shower is well, just that. According to the Urban Dictionary’s definition, “When a Juggalo/lette is showered in this drink it is a representation of the old you dying, and the new you coming to life.”

Medlyn offered this symbolic death and rebirth in his performance of Juggalodom to a reserved NYC audience, showering himself and his motley cast at intervals. With a set designed by Kathleen Hanna that harkened to rural Americana–clotheslines strung with underwear hung across the ceiling, a white preacher’s tent, a dj booth and many bright bean bag cushions–Medlyn created a group experience of “truth-telling” the ICP way. This means that for one hour, the Kitchen echoed with chants of “woot-woot!” and cursing that even for a New Yorker went to extreme heights. It is hard to filter form and content in Wicked Clown Love, and hard to tell when Medlyn is performing his own material or acting as a Juggalo, rapping ICP songs as a kind of 21st Century minstrelsy. At best, the persona of the Juggalo serves as a confessional platform for poverty, ignorance, soul-searching and figuring out what it means to be a man. What is important about this show isn’t necessarily its ethnographic approach to the culture of the Juggalos/ettes, however thorough its research on this subculture appeared to be. I was definitely inspired to do my own investigation, and found the short documentary American Juggalo to be informative. On the level of performance art, the urgency of Wicked Clown Love comes from its rough composition and atmosphere of wavering belief. If ICP culture is about finding something to believe in outside of religion or consumerism, than Medlyn’s performance is about finding something to believe in beyond performance itself. The strands of poetry (Robert Bly’s Iron John and the Gathering of Men), philosophy (Simone Weill’s theory of decreation), and pop (looping samples from Billy Joel’s “Just the Way You Are,” Phil Collins, etc.), woven into his raps take time and acute attention for the audience to fully understand. The confrontational veneer of uniquely Juggalo machismo is a cover for the introspective and truly scary reflections on manhood that Medlyn seeks to communicate. In attempting to perform the undoing of the self that is decreation, he makes performance “do” the opposite of its normative purpose as that which “builds” personas, characters, and mythologies. This unraveling, or disjuncture, questions traditional masculine identity where power struggles, violence and greed continue to be behaviors that publicly affirm it. 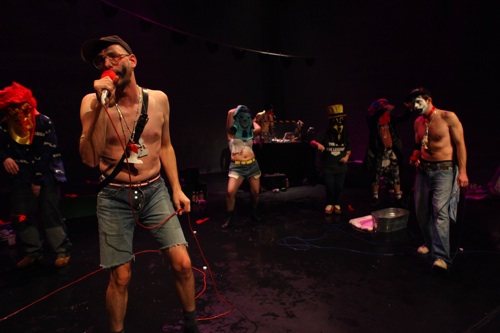 As a voyeur, it is easy to buy into the spectacle of the ICP, to laugh at the make up, cut t-shirts, masks,”bling,” and the exposure of men’s torsos or women’s waists as merely camp underbelly or low art gristle–but this sense of remove doesn’t hold. As Medlyn’s exposure increases throughout the piece, it culminates in a scene of flashlight-wrestling with another male performer, where their struggle to overtake one another becomes elongated and slows into  a series of embraces. Their bodies shine, dripping sweat and faygo in the dim glow of the flashlights, offering a rare moment of silence. It is this moment that encapsulates the vulnerability, exhaustion, and erotic potential of such forms of “male bonding,” where a sense of caring enters into the curiosity and shame between them. (It only took 45 minutes of screaming, cursing, running around, pounding fists and rapping non-stop to get there.) The following weekend, Feb. 9-11, the Kitchen presented the premier of Counterfeit Scenario, a dance about making a dance by choreographer Levi Gonzalez (on a shared bill with Amanda Loulaki). Though a comparison cannot be made between the aesthetics of Medlyn and Gonzalez, it can be made between their respective examinations of power. Counterfeit Scenario plays with performer-audience and choreographer-dancer dynamics to reveal the schisms in these relationships. It begins with a booming sound and bright lights, not unlike the beginning of a magic show. Between these elements and Gonzalez’s cobalt blue shirt and pants (designed by Emily Roysdon), there is a David Copperfield-like quality to the theatrics. Gonzalez and dancer Natalie Green slide their feet across the stage, looking downwards for a long time, as if they are searching for, or laboring to find, momentum (Gonzalez calls it “loping”). A microphone is positioned downstage as if it were a third performer. Gonzalez steps up to it, and then the performance unravels. He directs Green to “perform minimal raw excess,” as she exhausts herself to find the right quality of movement. He then asks her to perform some of the choreography with names of phrases that Green can’t always remember or execute. Gaps in memory or translation are laid bare as the choreographer’s power is drained of its magical quality, eliminating the hierarchy between Gonzalez and Green. Green and Gonzalez "loping through space."

She sits in a chair as he leads a visualization exercise that becomes increasingly absurd. Visualization methods such as the Skinner Release Technique are often part of the warm-up process for modern dancers, but here, Gonzalez delivered it for the benefit of the audience as well. As audience-participation exercises have become ubiquitous (to the point that I now want to roll my eyes every time a performer asks me to close them) this exercise had less to do with participation than it did with parody. Gonzalez goes from asking us to imagine the length of the spine down to the anus, opening up the anus, then opening the anus into a sexual encounter with him and so on. The instruction-monologue goes on for a long time, and we know that it is going nowhere. But it revealed all that is blocked out in the studio, when it is time to work. Opening up the imagination speaks to utility and the capacity to execute the performance, but is there also room for desire, distraction, inappropriate thought? Is there a time to stop and masturbate? Gonzalez exposes these thoughts and perseveres. He then continues trying to direct Green through a series of phrases with comical titles, like “room flip,” and ” jumping 180 degrees to face the front and back of the stage while looking surprised.”

At one point Gonzalez says, “We’re killing the momentum of the piece now,” and looks out at the audience. Green also stares. It’s clearly a performance of failure, but it doesn’t feel affected. In letting go of control, Gonzalez reveals every artist’s true fear: losing the idea, hold, momentum. He allows us into this space, asks us to witness it, and still see the work.  The piece continues with bits of humor and anxiety, as the two “perform material that is not in the piece,” showing how little is used in comparison to how much is created, what is thrown away, rejected. Counterfeit Scenario challenges the idea of performance as static, as an object, as just one dance by including the whole process, and in so doing declares that it is really everything.