“This is quite a turn out for an ‘ism’ that from time to time has been relegated to a post buried in the past,” said feminist critic Lucy Lippard. “It’s also personally amusing to me that this takes place at the MoMA, not notorious for supporting women artists,” she continued, speaking at MoMA in 2007, after WACK!: Art and the Feminist Revolution opened there. “I’ve picketed the museum on various occasions, so it is fun to be up here.  Thank you very much for catching up.” Then she added, “Better late than never.”

“I wonder if the time of feminism is always belated,” asked theorist Judith Halberstam later the same year, “if the institutional time of feminism is always something that will come way at the end, when it’s no longer necessary to make this gesture or to perform this act?” Halberstam repeated Lippard’s “better late than never” quip when she spoke on a panel at MOCA Los Angeles after the WACK! show traveled West.

Recognizing feminism as a movement with an impact in 2007 was late enough to be embarrassing. But it was better than never. And even if Anna Mendieta and Martha Rosler’s imagery had already emblazoned itself onto the psyches of committed female art students nation-wide, how gratifying to see members of the “general public” perusing Mendieta’s Silueta series or Rosler’s Bringing the War Home?

It’s hard to imagine any instance in which it would not be gratifying to see underrepresented women artists, or some other painfully overlooked group, given prime-time museum space.  Or so I thought until I visited In Wonderland: The Surrealist Adventures of Women Artists in Mexico and the United States, which opened  at Los Angeles County Museum of Art (LACMA) in January. There are times, it turns out, when it is worse late than never. The In Wonderland exhibition, curated by Ilene Susan Fort of LACMA and Tere Arcq of Mexico City’s Museum of Modern Art, exhibits “iconic figures such as Louise Bourgeois, Leonora Carrington, Frida Kahlo, Lee Miller, Kay Sage, Dorothea Tanning” alongside “lesser known or newly discovered practitioners.” Its title, besides being a Lewis Carroll spin-off, reflects the fact that these “iconic” and “newly discovered practitioners”  were delving into the wonderland of “their own subconscious and dreams, creating extraordinary visual images.”  While Surrealist men “cast women as objects for their delectation,” the women made art “primarily about identity: portraits, double portraits, self-referential images, and masquerades that demonstrate their trials and pleasures.”

On the surface, I understand: this show is about women asserting their own subjectivity at a time when the value of that subjectivity was downplayed by the mostly-male powers that be. But the framing and installation of In Wonderland seems to suggest that “woman” in itself is a category that makes art valuable and assume that if you were an unknown “surrealist woman” you were naturally unknown because of your womanhood.

But most of the 48 featured artists merely reinforced what we already know: Frida Kahlo was really, really smart, and Dorothea Tanning, Leonora Carrington, Lee Miller and a few others did some pretty great work, while a lot of other artists (male and female, even though it’s just the female In Wonderland shows us) dabbled with “surreal” imagery to lesser effect.

The exhibition pairs art according to theme, and there’s one wall on which Kahlo’s garish, unforgettable double self-portrait hangs, one version of herself dripping blood down a hyper-feminine dress of lace and another version with a heart that’s still whole. Next to it hangs a different artist’s double-self portrait: Helen Lundenberg’s overtly sweet, pastel colored portrait of herself as woman and child. All this pairing proves is that Kahlo was clearly the more muscular, provocative artist. Helen Lundeberg. "Double Portrait of the Artist in Time," 1935. Oil on fiberboard.

L.A. Times critic Christopher Knight liked In Wonderland but ended his review with this telling sentiment: “The show’s sprawling size provides a welcome artistic context for Kahlo, one of the 20th century’s most famous painters, who’s well-represented here.  . . . Accompanied by so many Surrealist women, Kahlo can be appreciated for her work, rather than for her singular biography.” Is that what we needed to finally appreciate Kahlo as a painter rather than the emotionally volatile, sometimes-hotheaded former-wife of a Mexican muralist? A show in which an army of lesser artists provide her with context? It’s hard not to feel like women are being used here as much as ever, as empty pawns for proving that history was diverse and museums are doing their part to parse that history. 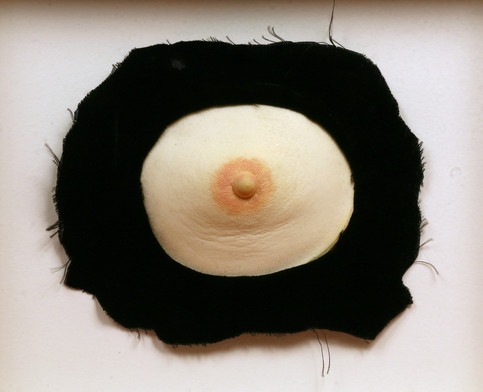 The very last work in the exhibition actually wasn’t made by a woman at all. Marcel Duchamp made it, and it’s a rendering of a woman Surrealist’s breast. Duchamp cast the breast of artist Maria Martins, who went mostly by Maria, and inserted a latex replica of it on the cover of a 1947 edition of Le Surréalisme, next to a sticker that read Prière de Toucher or “Please Touch.” We can’t touch the version in In Wonderland, however. It’s encased in glass, which is one of the few decencies the exhibition shows its subjects.